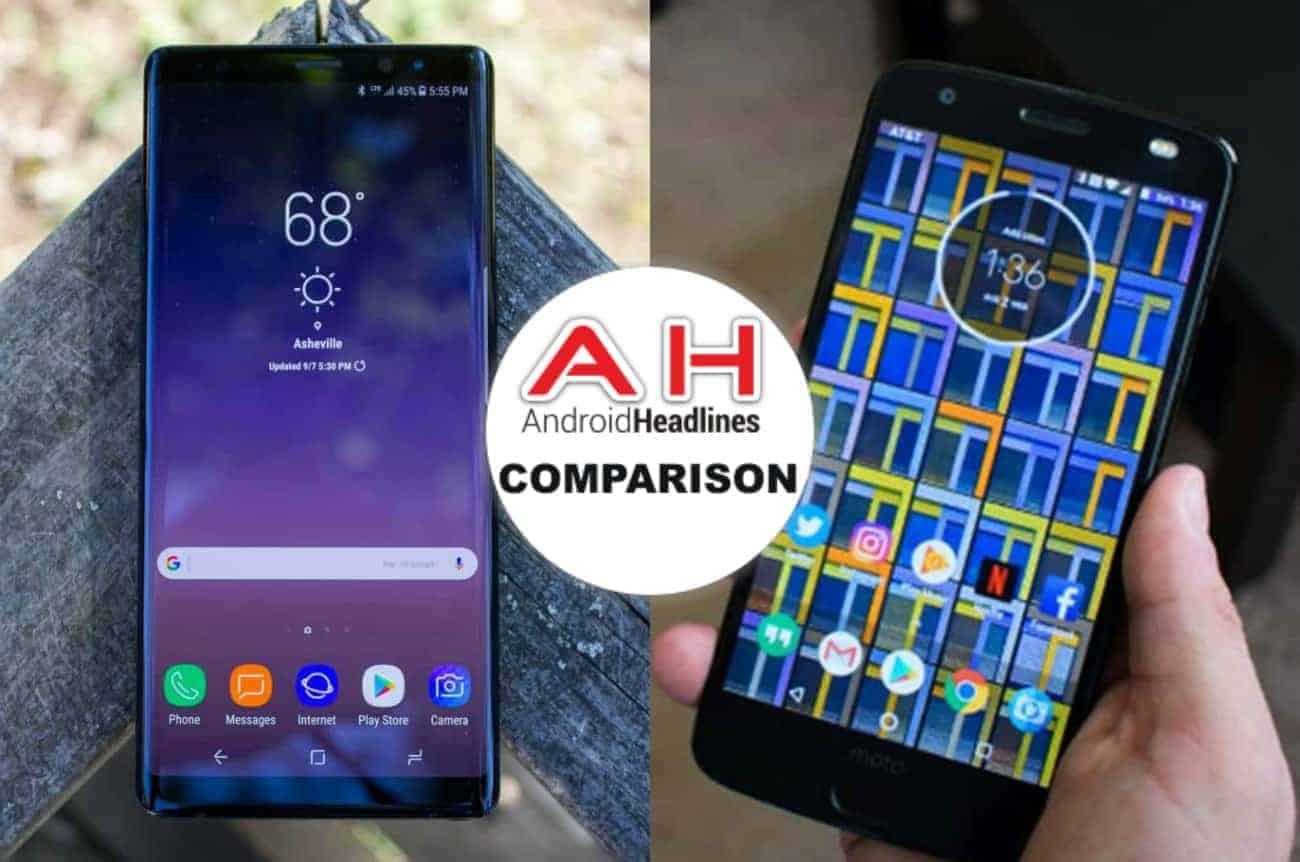 Do we have a good one for you today – the formidable Galaxy Note 8 takes on the Moto Z2 Force. Here we have the flagship smartphone from Samsung and Motorola, and even though people will cry that this is not a fair comparison because the Note 8 is in a class by itself – that is just not so as we will see just how much these two devices have in common. There is no doubt that the Note 8 is the ‘winner’ in the looks category with its large Infinity Display and futuristic looks, while the Z2 Force is more common looking from the front with its larger bezels. The devices do share many of the same internal parts and specs, but the overall feel of the devices are quite different. Let’s take a look to see just what these two devices have in common and then we will take a closer look at each device.

Designed for vastly different audiences, the Note 8 and the Z2 Force, surprisingly have several things in common. Though different in size, the displays both use the OLED technology, a QHD resolution, and a form of notification system when the device is resting. They both pack a Snapdragon 835 processor and an Adreno 540 GPU – if you purchase a Note 8 in an EMEA country, you will find an Exynos processor and Mali GPU. Both use 64GB of internal base memory and both offer expandable memory via a microSD card. The Note 8 and the Z2 Force both use a dual 12MP camera setup and both take excellent photos. Both use a non-removable battery and offer quick charge to rapidly juice up your battery when needed. The devices are surprisingly similar in physical size with the taller and thicker Note 8 weighing in at 52 grams heavier. You will find a fingerprint sensor (Note 8 on rear and Z2 Force on the front) on both, as well as Bluetooth (v5.0 on the Note 8 and v4.2 on the Z2 Force), and a USB Type-C port for charging, data transfer, and in the Z2 Force’s case, for you headphone dongle. Both devices have their own personal assistant – the Note 8 has Bixby and the Z2 Force uses Moto Voice. Both are running Android 7.1.1 and are upgradable to Android 8.0.

Please take a careful look at the detailed specifications comparison chart below and here you will see just how these two great devices stack up against one another. After that, we will look at each device in greater depth and point out some of its pros and cons. From all of this information, we will try to determine the winner based on specs and execution of design and functions. 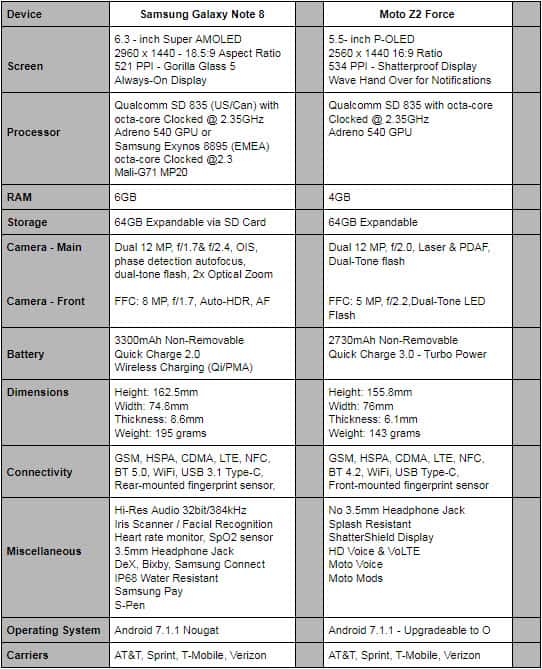 Samsung brought back the Galaxy Note 8 with a vengeance after the Note 7 recall last year. The Note 8 was certainly worth the wait as it received their largest Infinity Display, lost its physical home button to on-screen buttons, and received the smallest top and bottom bezels you have ever seen – it’s a shame that Samsung did not include a bottom, front-facing speaker in an area where there is a blank spot. We may not have gotten our dual speakers, but Samsung graciously included a dual camera setup for the first time. The fingerprint sensor is on the back like the Galaxy S8 series, however, Samsung at least separated the sensor from the camera lens with the dual flash. If you are near a light source, it is easy to use facial recognition or the iris scanner (if you do not wear glasses) to unlock your device – if all else fails, you can always type in a pin number. Samsung made many improvements to the S Pen and its software, making it more productive and easier to use. The Galaxy Note 8 is arguably the best looking and most powerful smartphone on the market, but it does come with a $960 price tag.

Samsung increased the Note 8’s display size from 5.7-inches to 6.3-inches (slightly larger than the Galaxy S8 Plus) and gave it the 18.5:9 aspect ratio, which will make watching videos or multitasking a better user experience. It uses a QHD+ display resolution of 2960 x 1440 pixels and 521 pixels-per-inch (PPI). When you take the Note 8 from the box, it will be set on Full HD to help save battery life, but a simple visit to the settings will allow you to change the resolution to QHD+. Samsung continues to use their Always-On display to see easily your notifications to decide if you want to wake-up the device for further review.

For the US/China models, Samsung put in the Snapdragon 835 octa-core processor clocked at 2.35GHz and paired it with an Adreno 540 GPU for excellent graphics. For EMEA countries, they use their excellent Exynos 8895 octa-core clocked at 2.3GHz and a Mali-G71 MP20 for graphics. Both processors use the new 10nm technology that decreases the size and heat of the processor. Both models come packing 6GB of DDR4 RAM and 64GB of expandable memory.

A Dual sensor camera had been rumored for the past couple of years, but the Galaxy Note 8 is the first Samsung device to sport dual cameras. They added two 12-megapixel sensors with PDAF, a dual-tone LED flash, auto HDR, OIS, and 2X Optical Zoom. You can also zoom 10X by swiping the screen, but that is a digital zoom. The only difference between the primary and secondary cameras is the aperture – the primary uses a large, f/1.7 aperture for low light shooting and the secondary sensor has a smaller, f/2.4 aperture. Most photos will use the primary camera with the secondary one used to create a bokeh effect. The Note 8 also has a nice sized 8-megapixel front-facing camera (FFC) with a large f/1.7 aperture, auto-HDR, and Samsung even threw in autofocus. The non-removable 3,300 mAh battery should easily make it through a long day, but you will have to charge it each night via the Quick Charge 2.0 (not sure why they did not go to 3.0) or wireless charging.

The most exciting part of the Note 8 is the S Pen, although even without it, the Note 8 is a formidable device with lots of extras. Samsung includes Samsung Connect to control your home appliances, the DeX station that allows you to hook up a monitor, keyboard, and mouse to your Note 8 for a desktop experience. Not content with Google Assistant, Samsung is trying to build a better mousetrap – its own Bixby personal assistant. Bixby has its own dedicated button on the Note 8, directly under the volume key. The heart rate monitor and oxygen sensor come on the Note 8 as well as Samsung Pay and an IP68 rating against dust and water. It arrives with Android 7.1.1, measures 162.5 x 74.8 x 8.6 mm, and weighs in at a hefty 195 grams. It is available in Midnight Black, Orchid Grey, Maple Gold, or Deep Sea Blue depending where you are located. The Galaxy Note 8 will cost about $960 outright and is available for purchase from just about everywhere. 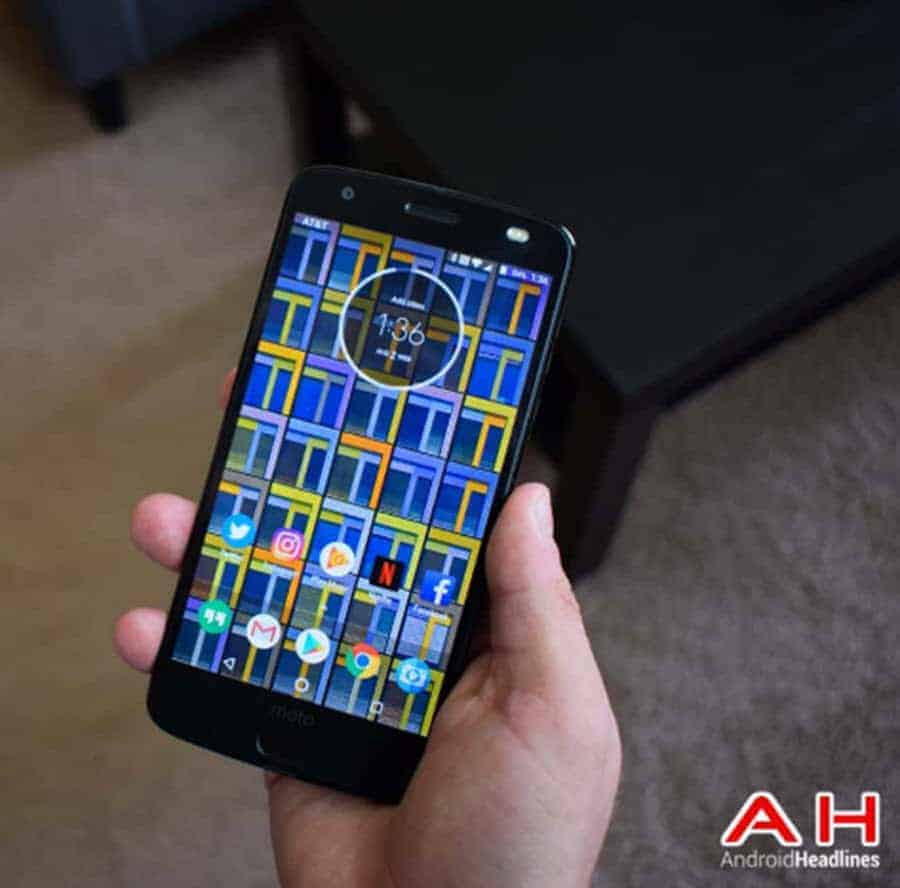 This may be the most expensive Motorola smartphone to date – about $756 – $800 depending on where you purchase your Moto Z2 Force – but it is also their most feature-laden. It sports a P-OLED display with Moto’s ShatterShield technology, a powerful processor and GPU, a new dual camera, and the ability to use Moto Mods. The Z2 Force is an all-metal design with a large round camera bump that doubles as a stabilizer for the Moto Mods – in fact, many think that the device looks better when it is sporting a Mod. This solid Motorola device is a flagship in every sense of the word.

The Moto Z2 Force keeps its predecessor’s 5.5-inch P-OLED display with the standard 16:9 ratio and QHD, with a resolution of 2560 x 1440 pixels and a density of 535 PPI. Rather than using Gorilla Glass 5 for protection of the display, the Z2 Force uses Moto’s proprietary ShatterShield. It is made up of five layers that help keep the display from shattering when dropping – however, you need to use a screen protector to avoid scratching the plastic display.

Lenovo owned Motorola, went with the best processor they had available to them – the Snapdragon 835 octa-core with a quad-core clocked at 1.9GHz and another clocked at 2.35GHz. An Adreno 540 GPU is used to handle any graphics, be it movies or gaming, you can throw at it. The Moto Z2 Force packs 4GB of DDR4 RAM and a base of 64GB of internal memory that is expandable via a microSD card.

The trend this year is including a dual camera setup and the Moto Z2 Force will not disappoint. It is packing two 12-megapixel sensors – the primary one has an aperture of f/2.0, laser and PDAF focusing, and a dual-toned LED flash. Moto decided the secondary camera would be used only for monochrome photos and that is the best way to get a true black and white photo. The FFC is a 5-megapixel affair with an aperture of f/2.2 and a dual-tone LED flash. A 2,730 mAh non-removable battery powers the Moto Z2 Force and it comes with Moto’s Turbo Power charger – this is down from the 3,500 mAh battery in the Moto Z Force. You can purchase a 2,200 mAh Moto Mod battery and slap it on the back for more power. This add-on battery can be used with a wireless charger.

While the Moto Z2 Force has many great qualities, you must be careful not to scratch the ShatterShield display – it is made from plastic, not glass. We must also remind you that the Z2 Force lacks a 3.5mm headphone jack, but they do supply a dongle that plugs into the Type-C port and converts it to the headphone jack. The big word about this device is its ability to use Moto Mods – they can be as simple as an add-on battery to a high-powered Hasselblad camera. They really do add value and fun to your Moto Z2 Force. Moto makes the best radios, so if you live on the fringes of a signal, you may want to give the Z2 Force a test ride. It measures in at 155.8 x 76 x 6.1mm and weighs in at 143 grams. It comes in three colors – Super Black, Fine Gold, and Lunar Grey with pricing from $756 to $800 depending on where you purchase the device. 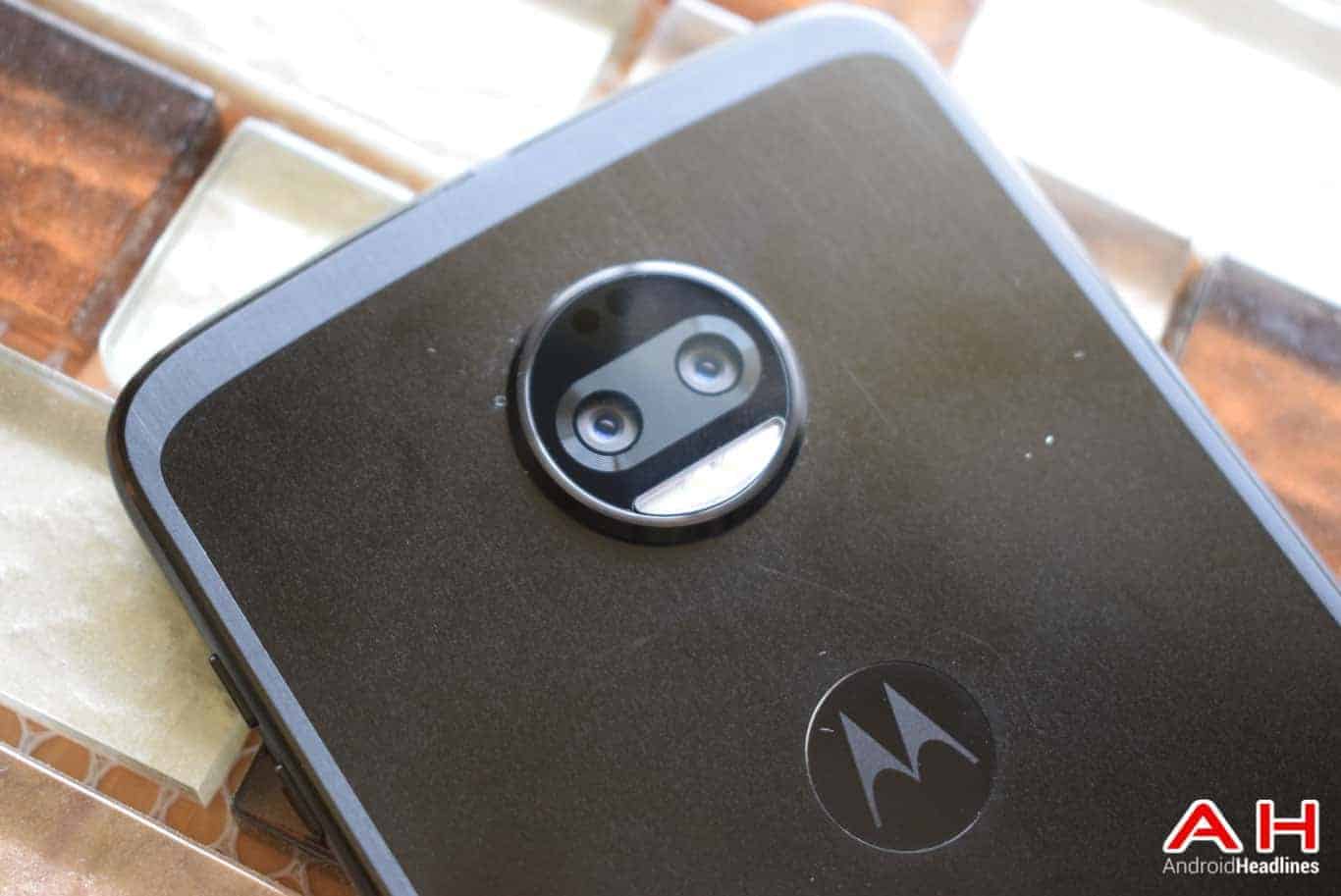 This was a difficult decision for me, but I am picking the Moto Z2 Force as the winner of this comparison, based solely on the use of Moto Mods and the $200 in price savings. The Galaxy Note 8 is arguably the best smartphone on the market at this time – it has the looks, the display, and the S Pen advantage, but the Moto Z2 Force has the same processor/GPU, expandable memory, a great P-OLED display, an almost equal camera area, and the use of Moto Mods, which greatly increases the Z2 Forces options.

If you will truly use the S Pen, Samsung Pay, do a lot of multitasking, own Samsung appliances, need the better IP68 water resistance, and demand a headphone jack, then the Galaxy Note 8 is for you.

If you do not need an S Pen, and will never use the heart rate monitor or Samsung connect, then save yourself $200 and try the Moto Z2 Force. You will get excellent pictures, great performance, a Turbo Charger, a ShatterShield display, and something that no other manufacturer offers – the Moto Mods – you will not be disappointed.