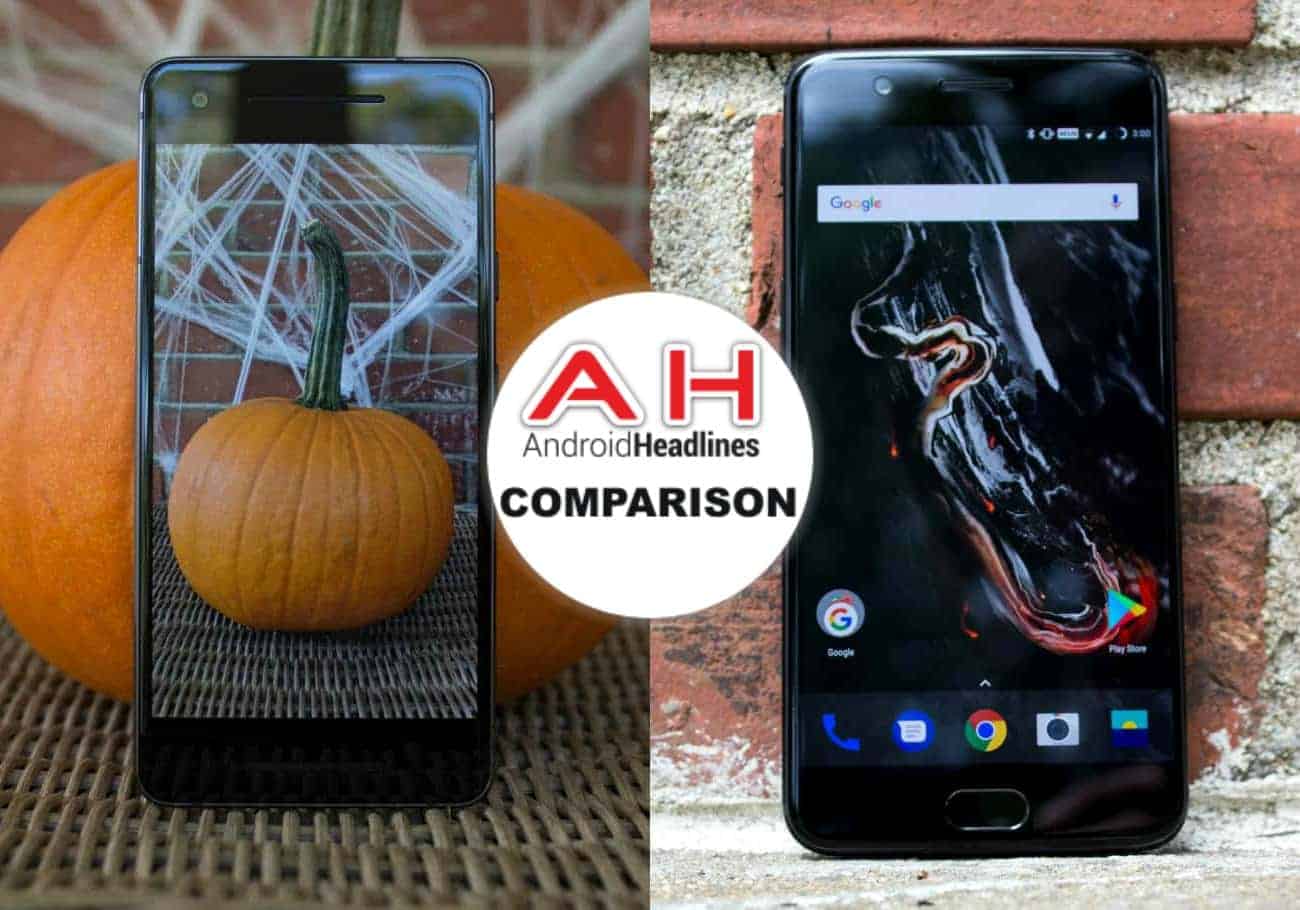 We have a great matchup for you today – the Google Pixel 2 takes on the OnePlus 5. Here we have two “retro-looking” devices with large top and bottom bezels, Full HD AMOLED displays with the old standard 16:9 ratio. The Pixel and OnePlus devices have hordes of followers that are very dedicated to their brand. There are Nexus/Pixel users that will own no other brand of smartphone, while many OnePlus owners show the same devotion. The OnePlus 5 device came out in June, while the Pixel 2 just arrived last month, yet both look similar from the front with their large bezels. Each model has an excellent camera area, and they use the same processor/GPU. The Pixel 2 may be the go-to device with its pure Android 8.0 Oreo software, but the OnePlus 5 has a huge price advantage of being $175 less than the Pixel 2. Which one of these devices has what it takes to win this comparison? These questions and more are what we hope to answer with this comparison. Before we look at each individual device, let’s take a look at what they have in common.

The Pixel 2 and OnePlus 5 do have a few things in common – they both use an AMOLED display, Full HD resolution, a 16:9 screen ratio, and both use Gorilla Glass 5 for protection. You will find the Snapdragon 835 processor and an Adreno 540 GPU in both devices along with a 64GB or 128GB model, and both are non-expandable. Both have excellent camera areas and both have a non-removable battery. You will find a fingerprint sensor on both devices, BT 5.0, a USB Type-C port, NFC, and Android Pay. The Pixel 2 and OnePlus 5 are unlocked devices that should work on all major US carriers.

Please take a careful look at the detailed specifications comparison chart below and here you will see just how these two great devices stack up against one another. After that, we will look at each device individually in greater depth and point out some of its pros and cons. From all of this information, we will try to determine the winner based on specs and execution of design and functions. 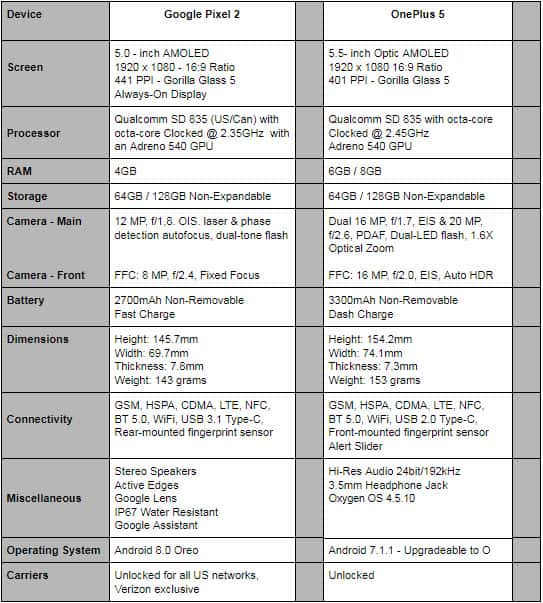 The Google Pixel 2 lineup is now a reality, and from all accounts, the second iteration of the Pixel line really deserves your consideration when shopping for a new smartphone. The Pixel 2 XL can stand up to any flagship on the market, although the Pixel 2 that we are looking at in this comparison looks a little dated with its large bezels. However, we are comparing it to the OnePlus 5, another design that could use a little updating. Still, the Pixel 2 models do use the best processor/GPU out there and use the AMOLED display technology. The Pixel 2 sports the older 16:9 aspect ratio, but also incorporates an Active Edge that lets the user ‘squeeze’ the sides of the phone to launch Google Assistant without a voice command. Google Lens is another feature that can identify details about photos, much like Samsung’s Bixby. Pricing is also a consideration – the standard 64GB model will cost you $650. You can buy them unlocked to work on any major U.S. carrier, but Verizon is once again the exclusive dealer of the Pixel 2 phones, which will allow you to purchase a Pixel 2 device on their payment plan.

The Google Pixel 2 sports a 5-inch AMOLED display with a Full HD resolution of 1,960 by 1,080 pixels and a density of 441 pixels per inch (PPI). Google went with the 18:9 display ratio on the Pixel 2 XL, but kept the 16:9 aspect ratio on the smaller Pixel 2. The Always-On display feature is used for notifications. This helps save battery life by not having to turn-on the main display unless you need more information about your notifications. The new Pixel 2 models use the latest Qualcomm Snapdragon 835 octa-core processor clocked at 2.35GHz and an Adreno 540 GPU for graphics – the same combo used on the OnePlus 5. The Pixel 2 has no expandable memory and comes with a basic 64GB, although you can also order a 128GB model. 4GB of RAM can be found on both variations.

Google never gave much thought to the cameras used on the Nexus models, but all of that changed on the Pixel line. Google has somehow managed to upgrade the camera to the best in the industry – with a single lens. The new Pixel 2 models are improved even more and continue to hold on to the number one spot. Both Pixels use a single camera with a 12-megapixel sensor with an aperture of f/1.8, and contain EIS and OIS support, laser autofocus and PDAF, and a dual-tone flash. The front-facing camera (FFC) used for selfies and video chatting is an 8-megapixel unit with fixed focus and a smaller f/2.4 aperture. The combination of the processor, an FHD display, and the use of Android 8.0 allow the small, non-removable, 2,700mAh battery to make it through an entire day with no issues. When you do need to charge the device, fast charging support will make that process relatively swift.

During the Nexus era, only a Google purist would be interested in purchasing one, however, the new Pixel line is a phone that any smartphone user could enjoy owning. The Pixel 2 looks are a little dated, but it should compete nicely with other flagships when it comes to specs. The biggest drawbacks on the Pixel 2 are the smaller display, only an FHD display resolution, the lack of expandable memory, and its availability, which has always been a problem with Google’s devices. It has the highest-rated camera on the market and its Camera Lens and Active Edge are attractive features. It has no Hi-Res Audio but it does feature stereo speakers on the front. There is no 3.5mm headphone jack, but a provided dongle allows you to use headphones via the Type-C port. Google finally added IP67 water resistance this year. The Pixel 2 is running Android 8.0 Oreo out of the box and will certainly receive the fastest Android updates. The Pixel 2 measures 145.7 x 69.7 x 7.8mm and weighs in at 143 grams. It is available in three colors – Just Black, Clearly White, and Kinda Blue. The Pixel 2 will cost about $650 with 64GB of storage and is available for purchase from the Google Store, Best Buy and as a wireless carrier exclusive through Verizon. If you buy it from Verizon, the company will allow you to finance it over 24 months.

There is a pack of devoted fans that follow the Nexus/Pixel, Sony devices, and the OnePlus line – and they eagerly awaited the OnePlus 5. Like the Pixel 2, the OnePlus 5 has large top and bottom bezels making them both rather boring in looks when compared to the newer flagships – even the Pixel 2 XL. However, other than the Full HD display, it is a well-built device that comes with cutting-edge technology under the hood. OnePlus designed the body out of anodized aluminum and gave it a curved back that makes it easier to grip. The side bezels are small, while the top and bottom bezels are rather large – taking its inspiration from the iPhone 7. OnePlus even included a layer of ceramic over the responsive front-mounted fingerprint sensor to avoid scratches. No comparison would be complete with looking at the value the OnePlus 5 provides – the base 6GB/64GB model costs a mere $479 and the 8GB/128GB model is only $539. Still, just how well does the OnePlus 5 stack up against the much more expensive Pixel 2?

The OnePlus 5 carries on the tradition of using only a Full HD resolution of 1920 x 1080 pixels and its 5.5-inch display will give you about 401 PPI. OnePlus uses an Optic AMOLED display that offers a very good viewing experience. There is also no secondary display for notifications so you must wake-up your device to view notifications. The OnePlus 5 uses the same processing power as the Pixel 2 – the newest Qualcomm Snapdragon 835 octa-core clocked at 2.45GHz. To handle its graphics needs it uses an Adreno 540 GPU. The device comes in two configurations – one with 6GB of RAM and 64GB of non-expandable memory and another with 8GB of RAM and 128GB of built-in storage. If you need more storage than that, you must look to the cloud.

The OnePlus 5 includes the most up-to-date Wi-Fi, Bluetooth 5.0, and cellular connectivity with support for 34 different frequency bands – meaning it should work on your carrier. The large bezel at the bottom of the OnePlus 5 is where you will find a front-mounted fingerprint scanner that works lightning fast. It supports NFC, Android Pay, a USB Type-C port for charging and data transfer. Unlike the Pixel 2, the OnePlus 5 also sports a 3.5mm headphone jack. The OnePlus 5 comes with Android 7.1.1 Nougat out of the box with an OxygenOS overlay and a path to an Android 8.0 Oreo update in the future. The device measures 152.2 x 74.1 x 7.3mm, weighs in at 153 grams, and comes in Midnight Black or Slate Gray.

This was a tough decision since both smartphones are so similar in looks and specifications – but pricing makes all the difference, and that is why I picked the OnePlus 5 as the winner of this comparison.

The Pixel 2, like the OnePlus 5, has an AMOLED display, but it does have the ‘Always-On’ feature. Its camera is widely regarded as the best mobile setup ever, and has Google Assistant built-in, IP67 certification, with an Active Edge feature, and Google Lens. The Pixel 2 is usable on any U.S. network and if you’re a Verizon customer, you can pay for it in installments. It also comes with Android 8.0 Oreo, you can be sure that the Pixel 2 will receive its updates faster than the OnePlus 5 will.

On the other hand, the OnePlus 5 may not have some of the Pixel 2’s features, but it is a great bargain at $479. The display is a half-inch larger, and when it comes to processing power, it equals the Pixel 2. When it comes to RAM, the OnePlus 5 beats it out with 6GB or even 8GB. For only $539, you can have 8GB and 128GB of internal memory. That much RAM may be overkill, but it makes the OnePlus 5 fly through its operations, being able to keep much more apps in memory. While the camera may not give as consistently good photos as the Pixel 2, it does have excellent software for the camera. It is just too good a deal to pass up.

Buy the Pixel 2 Buy The OnePlus 5