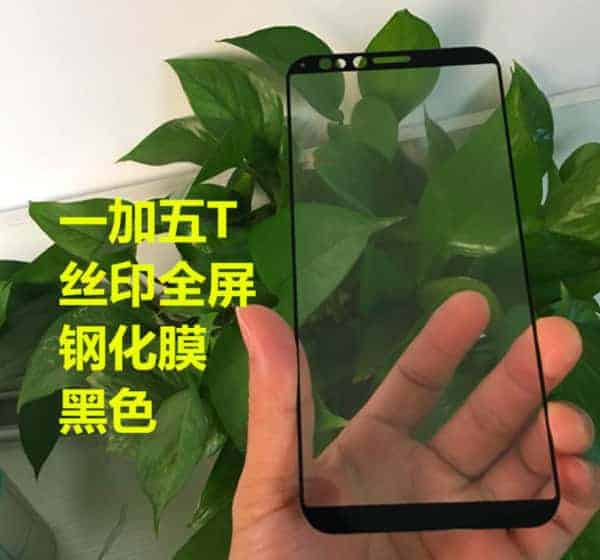 The OnePlus 5T is right around the corner, the company had announced that the phone will be launched on November 16, and the front panel of the device has just surfaced. If you take a look at the provided image, you'll get to see the alleged front panel of the OnePlus 5T. This image more or less confirms previous rumors, as it confirms that the phone will sport really thin bezels all around, and that it will resemble the OPPO R11s which was announced quite recently. Based on this front panel, the device's display will sport slightly rounded corners as well.

As you can see, there is no fingerprint scanner included here, which means it will ship on the back of the device, as expected. The side bezels are extremely thin, while the top and bottom bezels are not that thick either. The OnePlus 5T will be made out of metal, and its display will sport an 18:9 aspect ratio, just like the display on the OPPO R11s. This will be the first OnePlus-branded smartphone to sport such a display aspect ratio, The OnePlus 5T will sport a 6.01-inch fullHD+ (2160 x 1080) AMOLED display, while it will be fueled by the same processor as the OnePlus 5, the Snapdragon 835 64-bit octa-core SoC. These two phones will also share the same RAM and storage setups, it seems, as the OnePlus 5T is also rumored to arrive in both 6GB RAM and 8GB RAM variants, which will ship with 64GB and 128GB of storage, respectively.

The OnePlus 5T will sport a dual camera setup on its back, it seems like we're looking at 20 and 16-megapixel snappers once again, though it is possible that the company will upgrade the phone's sensors compared to the OnePlus 5. A 16 or 20-megapixel shooter will be included on the front side of the OnePlus 5T, and you can expect to see a battery that is larger than 3,000mAh included in this package as well. Android 8.0 Oreo will come pre-installed on the OnePlus 5T, while you'll get OnePlus' OxygenOS on top of Google's operating system. The OnePlus 5T will also include two SIM card slots, and OnePlus' proprietary Dash Charge fast charging will also be included in this package.