A device that’s believed to be the OnePlus 5T bearing the model number A5010 was reportedly sighted in the database of mobile benchmarking tool GFXBench earlier today, having been tested as featuring specs that are relatively similar to those of its predecessor, with a number of notable exceptions. The handset appears to be featuring a 6.01-inch FHD+ panel, i.e. one that boasts a resolution of 2,160 by 1,080 pixels amounting to a tall aspect ratio of 18:9 or 2:1. The listing corresponds with recent rumors that the OnePlus 5T will improve on the 5.5-inch 16:9 panel of its predecessor and offer more screen real estate with a nearly identical physical footprint, thus embracing the bezel-free trend that has been gaining significant momentum in the mobile industry over the course of this year.

Another apparent upgrade over the OnePlus 5 appears to be the front-facing camera of the OnePlus 5T, with GFXBench identifying the handset as featuring a 19-megapixel unit on its slim top bezel. With mobile benchmarks traditionally not being completely accurate in terms of determining sensor resolution, it’s possible that the flagship is actually equipped with a 20-megapixel secondary module, though either scenario still marks an improvement over the 16-megapixel unit situated on the front of the OnePlus 5. No specific aperture size has been provided by the benchmark, with the previous device having an f/2.0 lens with a focal length of 20mm on its top bezel. The rear imaging system was identified as being of the 15-megapixel variety which will likely amount to a 16-megapixel dual-camera setup once the handset is commercialized.

GFXBench appears to have benchmarked several variants of a OnePlus-made smartphone with the aforementioned model number, one of which has 6GB of RAM and 64GB of internal flash memory, whereas the other one offers twice the storage space and 8GB of RAM. These memory configurations correspond to the ones of the OnePlus 5 and both are likely to be commercialized with a price difference of approximately $70. The possible OnePlus 5T was also benchmarked as running OxygenOS based on Android 7.1.1 Nougat, though the finished product may ship with a OnePlus-made proprietary mobile skin based on Android 8.0 Oreo, with the Chinese phone maker already being in an advanced stage of optimizing the latest major iteration of Google’s OS for its smartphone offerings. The nonchalantly confirmed OnePlus 5T is expected to launch later this month, likely in about two weeks’ time. 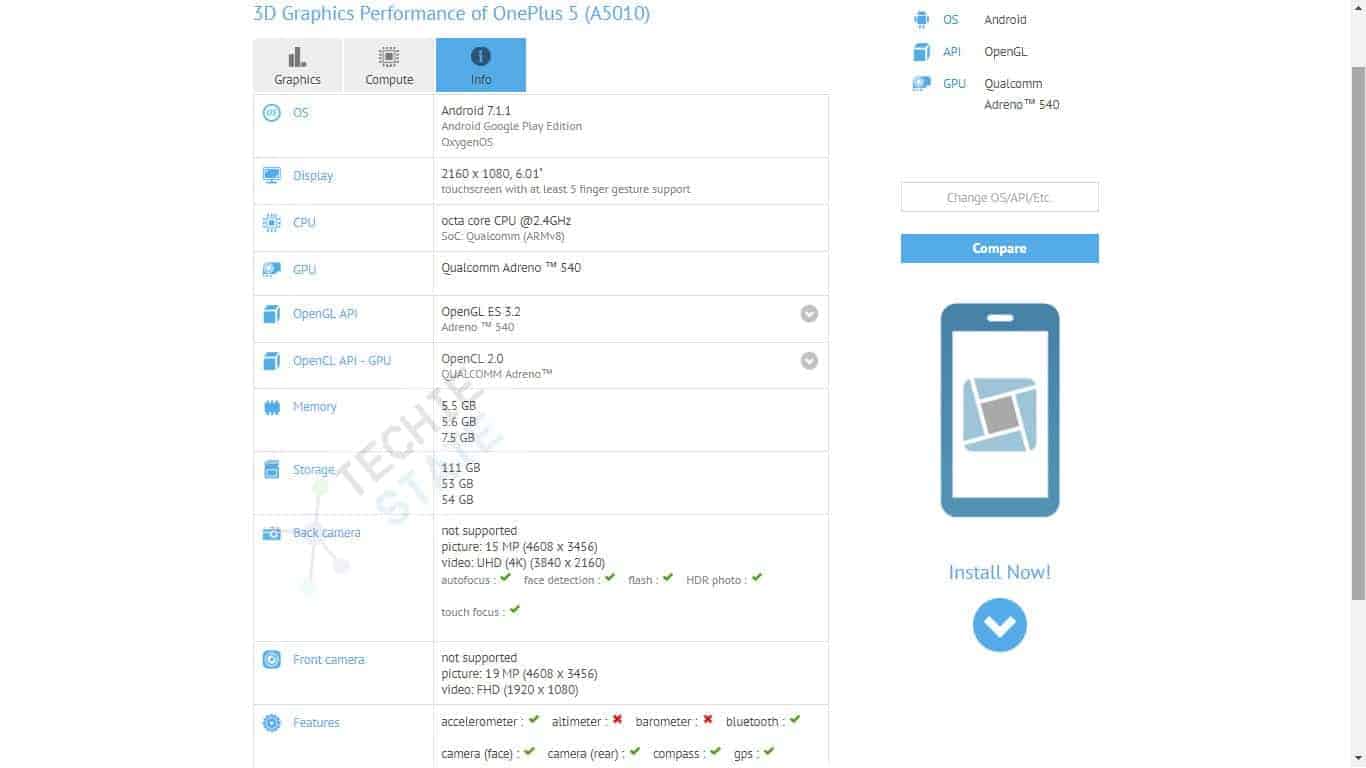