The OnePlus 5T will officially launch on Thursday, November 16th, the Chinese phone maker confirmed on Monday, adding that its next Android smartphone is set to go on sale in North American and Europe on November 21st. The Thursday launch event will start at 11 AM ET in Brooklyn, New York City, and will be live-streamed like all previous debuts of the company’s products. Likewise, the broadcast will be hosted on the firm’s official website, OnePlus confirmed. Starting this Wednesday, consumers interested in attending the event in person will be able to purchase tickets by referring to the banner below. A single ticket will be priced at $40 and while the quantity will presumably be limited, no specific figures have yet been provided by the original equipment manufacturer. India is officially set to receive the OnePlus 5T on November 28th, though a November 21st flash sale is also planned by the company, whereas the flagship’s release in China is scheduled for December 1st.

Three people will get the opportunity to visit New York for three days and attend the OnePlus 5T launch event free of charge, with the BBK Electronics-owned company announcing a new competition that requires you to have an Instagram presence. Details of the international contest are available below, with OnePlus already confirming that every winner will be able to bring one guest with them. The short teaser video shared by the company doesn’t reveal much, save for adding more credence to recent reports that the OnePlus 5T will adopt an entirely new aesthetic compared to its predecessor which will likely entail an 18:9 display panel and a relatively bezel-free design. The tagline of the upcoming happening is “A New View,” heavily implying that the upcoming Android flagship will offer something visually different than previous offerings from OnePlus.

Apart from announcing its first full-fledged product launch event in the United States, the Chinese OEM also suggested that the OnePlus 5T has been made with particular consideration for user feedback it received following the introduction of its previous smartphone. The OnePlus 5T is expected to be available on a global level, with prices starting and possibly ending below $600, according to a recent statement on the matter from the company‘s CEO Pete Lau. Besides an updated look that’s said to include a 6-inch AMOLED panel, the handset should succeed the majority of the hardware featured by its predecessor, save for possibly coming with an improved front-facing camera. 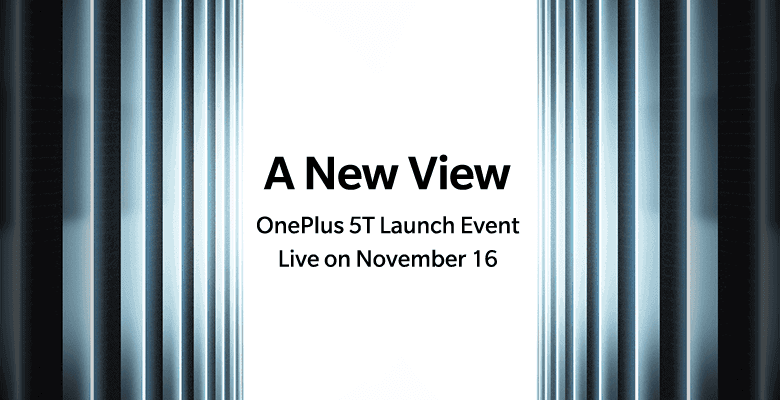