An unannounced Samsung smartphone with model number SM-J337 has popped up on the GFXBench database, and it could be the Galaxy J5 (2018). The benchmark listing shows the handset’s core specifications, indicating that it will come as another affordable offering. The company’s Galaxy J line consists of low-cost devices with mid-range specs and the Galaxy J7 (2017) hit the scene back in June of this year, so the Galaxy J5 (2018) is likely still a good while away. Nevertheless, the GFXBench listing offers a glimpse of what could be on the table, if the specs are indeed for the Galaxy J5 (2018).

Other features listed in the benchmark include a heart-rate sensor, a gyroscope, pedometer, accelerometer, altimeter, barometer, light sensor, proximity sensor, GPS, compass, thermometer, Wi-Fi, Bluetooth, and NFC. The handset will apparently be single-SIM, at least when it comes to this version spotted on GFXBench. On the software side, the smartphone will come with Android 7.1.1 Nougat on board out of the box. The benchmark listing offers no additional information regarding other configurations, release date, pricing, availability, or anything else, and Samsung itself has yet to confirm any details about the Galaxy J line for next year. If Samsung follows a yearly cycle, the Galaxy J5 (2018) could make its debut around June of 2018. 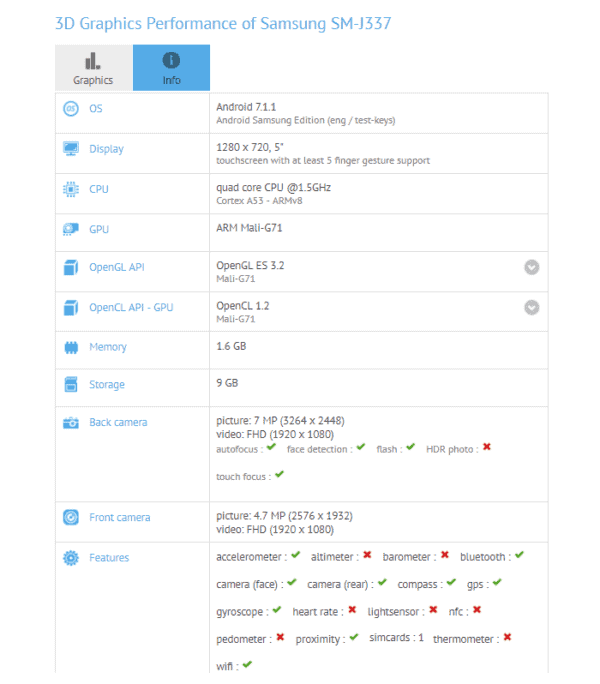