A full list of Samsung-made Galaxy smartphones and tablets set to receive the Android 8.0 Oreo update emerged online over the weekend, having been shared by one known industry insider from China. The devices listed below have been planned for a major operating system upgrade as of this Friday, the source said, implying that a number of other models may eventually receive Samsung’s build of Android 8.0 Oreo as well, depending on how the company’s initial software development plans go. The list itself doesn’t contain many surprises, at least in terms of Samsung’s high-end devices; the South Korean original equipment manufacturer traditionally releases two major OS upgrades for its premium offerings and will seemingly continue employing such support strategy going forward, with the Galaxy S6, Galaxy S6 Edge, and the Galaxy S6 Edge Plus all being set for an Android 8.0 Oreo upgrade in the future, together with every newer member of the same product family, as was previously rumored.

The same update is also planned for the Galaxy Note lineup, with the Galaxy Note 5 being the oldest S Pen-equipped phablet that Samsung is planning to upgrade to Android 8.0 Oreo. While the Galaxy Note 7 Fan Edition is a somewhat niche device, it isn’t excluded from Samsung’s Oreo roadmap, according to the same source. The Galaxy A-branded phones released over the course of this year are all alleged to receive the next major OS upgrade, as are the Galaxy A8 (2016) and Galaxy A9 Pro (2016). The upcoming Galaxy A (2018) lineup won’t launch with Oreo but should be updated in the first several months following its release early next year. All Galaxy C-series handsets that were commercialized in the last 18 months will be updated to Oreo next year, together with every version of the Galaxy J7 (2016) Galaxy J7 (2017).

The affordable Galaxy ON and ON Max smartphones that Samsung is selling in India will receive the same treatment, as will the company’s five last major tablet releases, with the Galaxy Tab Active S2 and Galaxy Tab A (2016) being the oldest Samsung-made slates currently planned for an Android 8.0 Oreo upgrade. The first stable build of Oreo-based Samsung Experience is expected to hit the Galaxy S8 and Galaxy S8 Plus in early 2018 before making its way to the Galaxy Note 8 and then all of the aforementioned models. Samsung’s Oreo beta is already underway in select countries and has reached its third experimental build earlier this week. 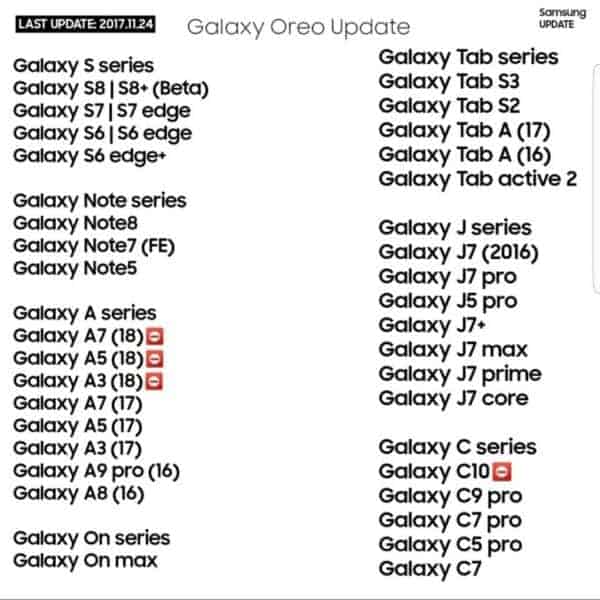