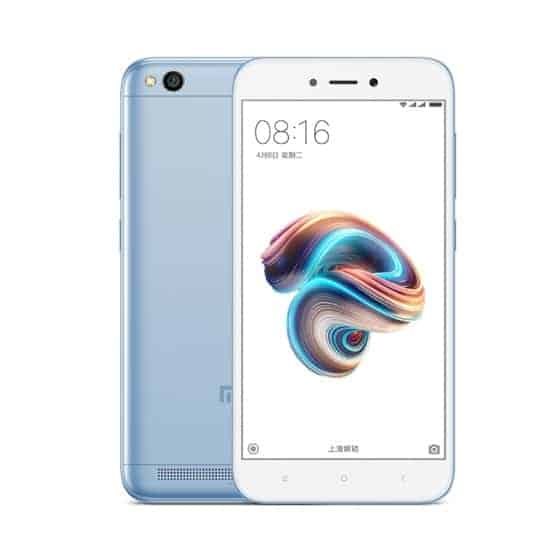 Xiaomi has just announced a new color variant of its Redmi 5A handset, the Light Blue model has arrived. This handset was originally announced last month, and it is the company's entry-level smartphone. The Redmi 5A originally arrived in Champagne Gold, Platinum Silver, and Rose Gold color options. This handset has been available in China for a while now, and the new color version is already available for pre-order in China, while it will go on sale starting on November 24, just in case you live in China, and you happen to be interested. This version of the Redmi 5A is priced at 599 Yuan ($91), which is the same price point as all the other color variants, as this phone is identical to all of those, except it comes with a different paint job, of course.

The Xiaomi Redmi 5A is made out of metal, and you can see what this phone looks like exactly by checking out the provided image above. This handset doesn't exactly have the thinnest bezels out there, though that's not all that surprising considering its price point. The phone comes with a set of capacitive keys which are placed below its display, while all of its physical keys are included on the right-hand side of this phone. A SIM card tray is placed on the left side of the Redmi 5A, while the phone comes without a fingerprint scanner. The Xiaomi Redmi 5A is fueled by the Snapdragon 425 64-bit quad-core processor, while it comes with a 5-inch 720p (1280 x 720) IPS LCD display. This handset also comes with 2GB of RAM and 16GB of native storage, while a 13-megapixel snapper can be found on its back side. A 5-megapixel camera is included on the front side of this smartphone, and the device comes with a 3,000mAh non-removable battery.

Android 7.1 Nougat comes pre-installed on this smartphone, while you will find Xiaomi's MIUI 9 OS / skin applied on top of Google's OS. This phone comes with two SIM card slots, and we're looking at a hybrid dual SIM setup here, which means that you can use the second SIM card slot in order to insert a microSD card and expand the phone's internal storage. This phone comes with two nano SIM card slots, by the way. The device measures 140.4 x 70.1 x 8.4mm, while it weighs 137 grams, in case you were wondering.

Buy the Xiaomi Redmi 5A