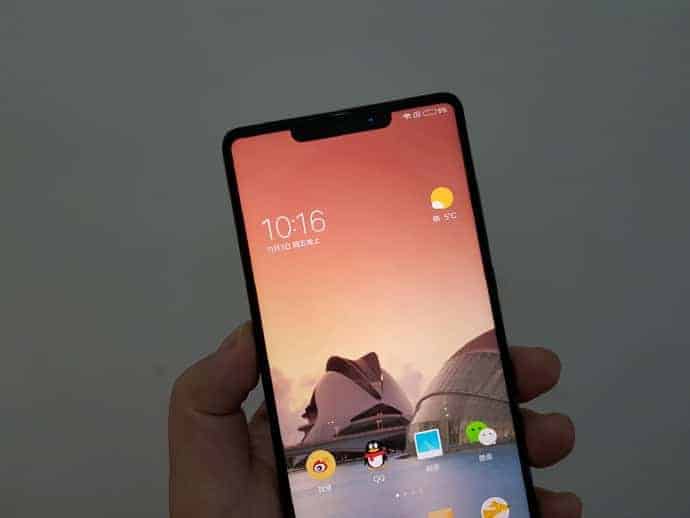 The iPhone X is currently one of the most popular smartphones out there, and it seems like Xiaomi is working on a design that will sport an iPhone X-esque notch at the very top of the display, at least according to the newly-leaked images. If you take a look at the gallery down below, you will see four images which are allegedly showing off Xiaomi’s upcoming smartphone, though we cannot see the whole design, as the bottom of the phone’s front side is not shown here, nor did the phone’s back side.

From the provided images, however, it is clearly noticeable that MIUI, Xiaomi’s custom UI, is running on this smartphone, and that the notch is present. Other than the notch, this smartphone sports really thin bezels, as expected, and according to the source, this could be a new version of the Xiaomi Mi MIX 2, which will be called the Xiaomi Mi MIX 2s. Now, this is definitely not the Xiaomi Mi MIX 3 or anything of the sort, so it is possible that it will launch in the coming months, presuming that the provided info is accurate. The phone will probably be made out of metal and glass, and chances are that its bottom bezel is quite thin as well. Presuming that these leaked images are accurate and that the phone is on the way, chances are we’ll see plenty of such leaks in the coming weeks. Some of you are probably wondering what specs will this smartphone ship with, well, the source did not share any such info, but we can always guess, of course.

The Xiaomi Mi MIX 2s will probably ship with high-end specifications, it is even possible that it will be fueled by the same processor that is included in the Xiaomi Mi MIX 2, the Snapdragon 835. The device will probably also include at least 4GB of RAM, though it is possible that it will ship with 6GB of RAM on the inside. It is still unknown whether it will come with one or two cameras on the back, but it will almost certainly ship with MIUI 9 OS on top of Android, especially if it launches in the next couple of months. Xiaomi had started rolling out MIUI 9 global stable version to a number of its smartphones, and the company’s devices that have launched lately all arrived with MIUI 9 out of the box.