JBL is just one of many third-party speaker manufacturers that are dipping its toes into the world of Google Assistant-enabled speakers. JBL announced the LINK 10, LINK 20 and LINK 300 at IFA back in September and now those Bluetooth speakers are finally available. JBL, being part of HARMAN, is known for its sound quality with its various Bluetooth speakers, Soundbars and Headphones, so there are some high expectations for the JBL LINK 20. Now can the LINK 20 live up to those expectations? Let's find out. 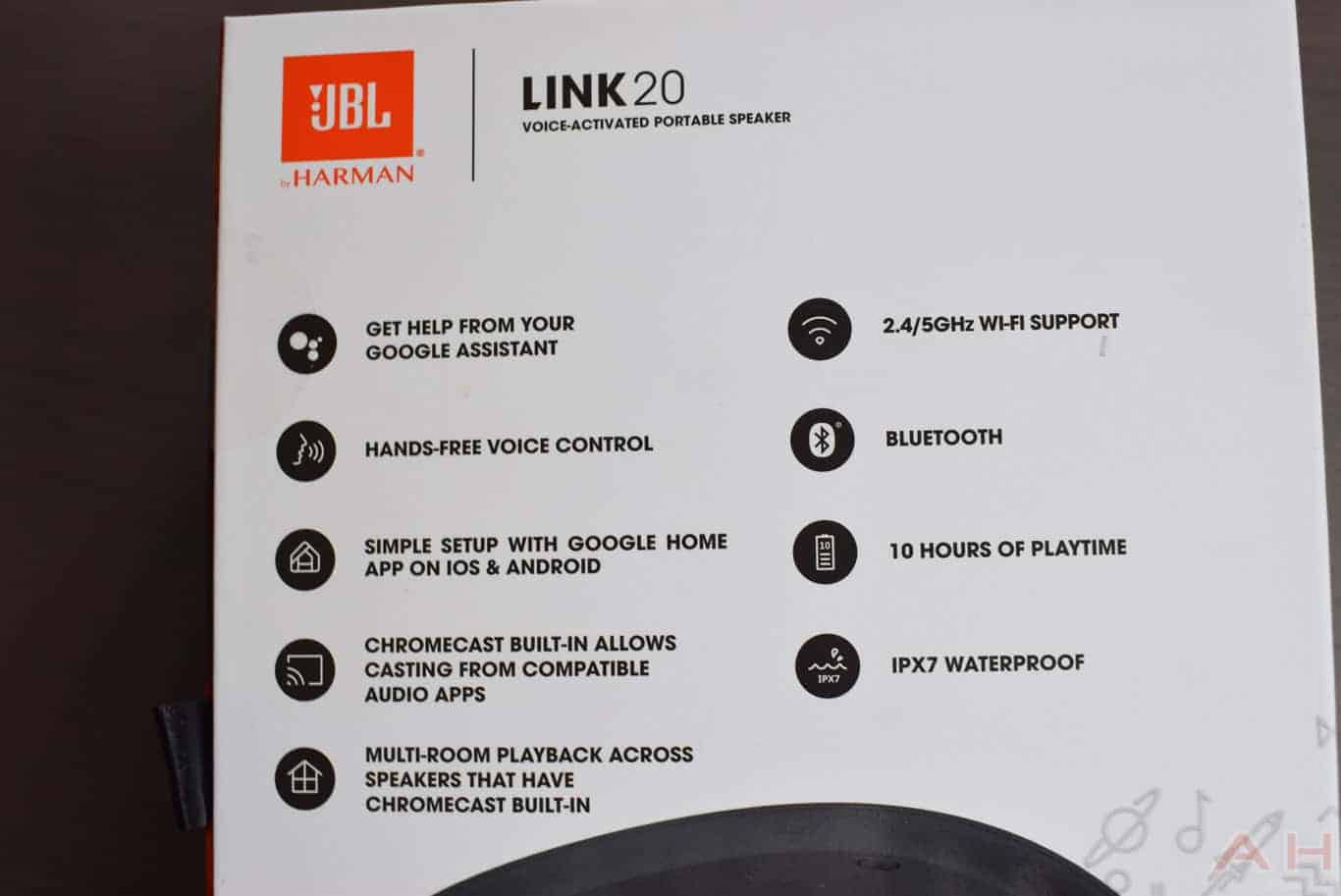 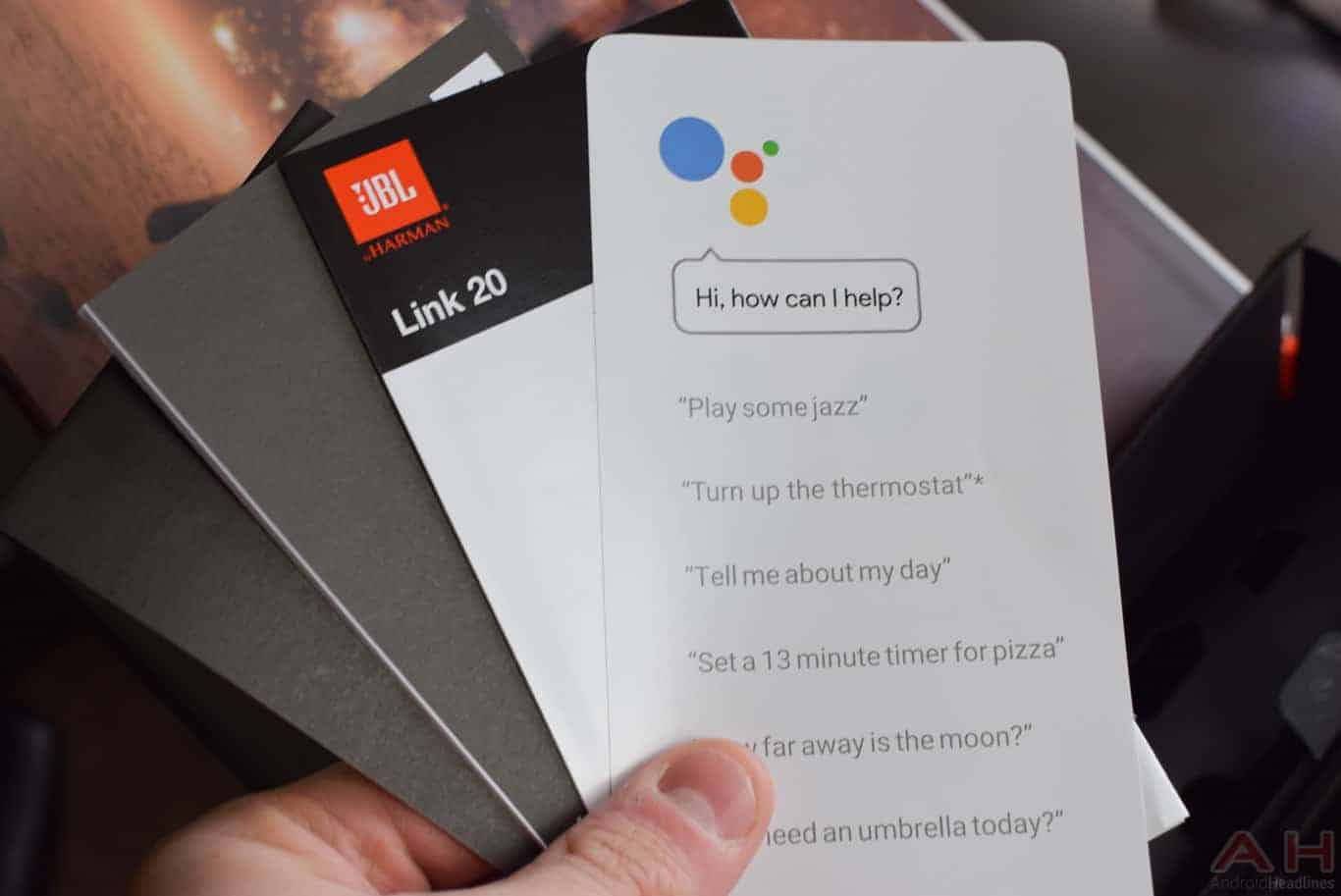 Inside the box with the JBL LINK 20, you'll find a small box on the left side which houses the wall adapter, the micro USB cable and some paperwork for getting started. And that's about it. There's not much in terms of surprises here in the box with the JBL LINK 20. There is a getting started guide for the speaker, as well as one for Google Assistant, if for some reason you haven't used Google Assistant yet. 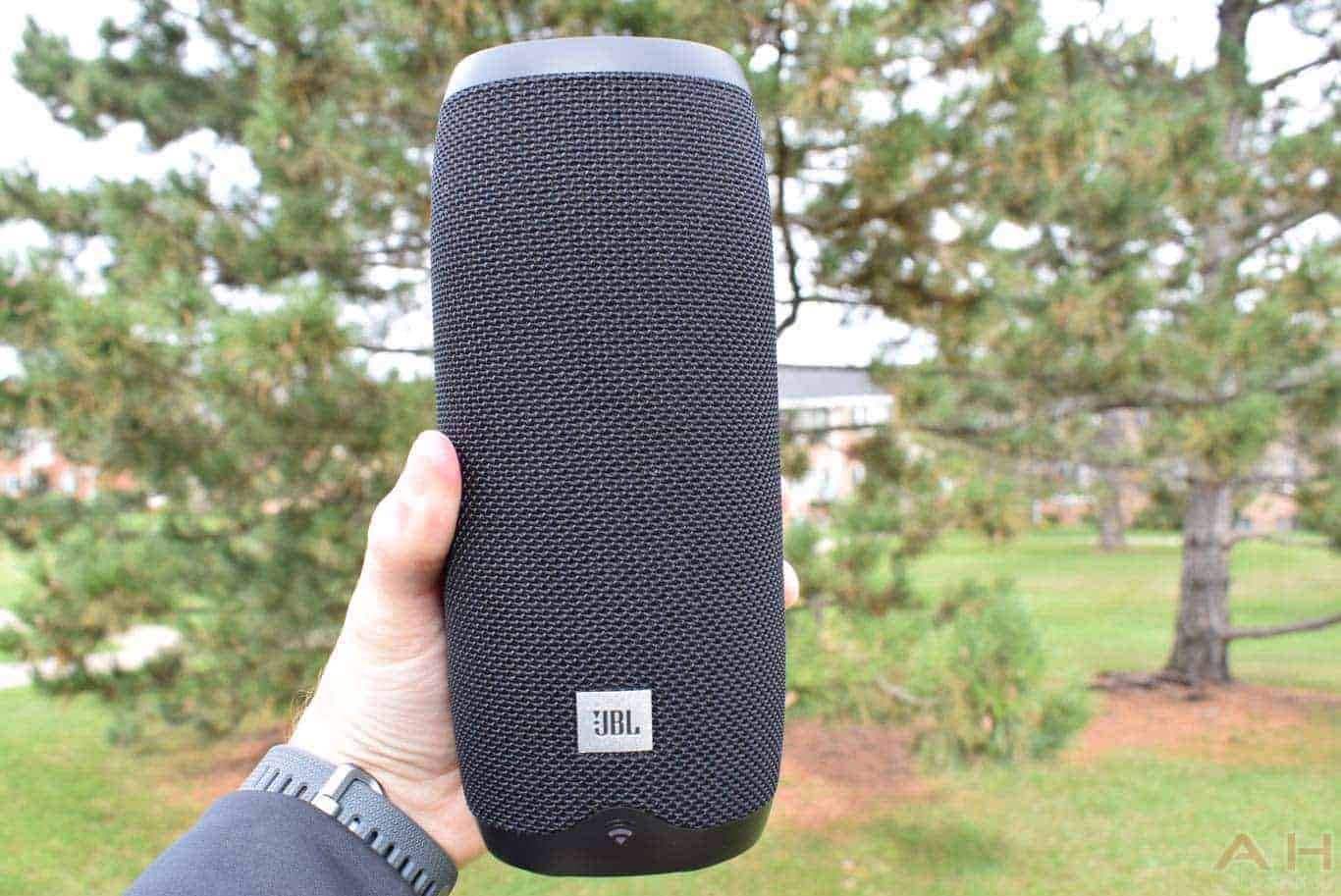 The hardware of the JBL LINK 20 is actually very similar to the Flip 4, which we reviewed recently. There's a mesh exterior which not only looks good, but also keeps the speaker waterproof or water-resistant. It sports an IPX7 waterproof rating, which means you can take it to the pool, take it in the rain or even the shower. On the top of the speaker, you'll find the usual controls with a Bluetooth pairing button at the top, play/pause near the bottom and then volume controls on the left and right. The addition here is the Google Assistant button which is in the center. Now the JBL LINK 20 is always listening, however you can also opt to press the button to talk to the Assistant instead of saying "OK Google". The only other buttons are on the back, which is a power button and the mic mute button. And finally the micro USB port is found at the bottom under a flap – for waterproofing reasons. 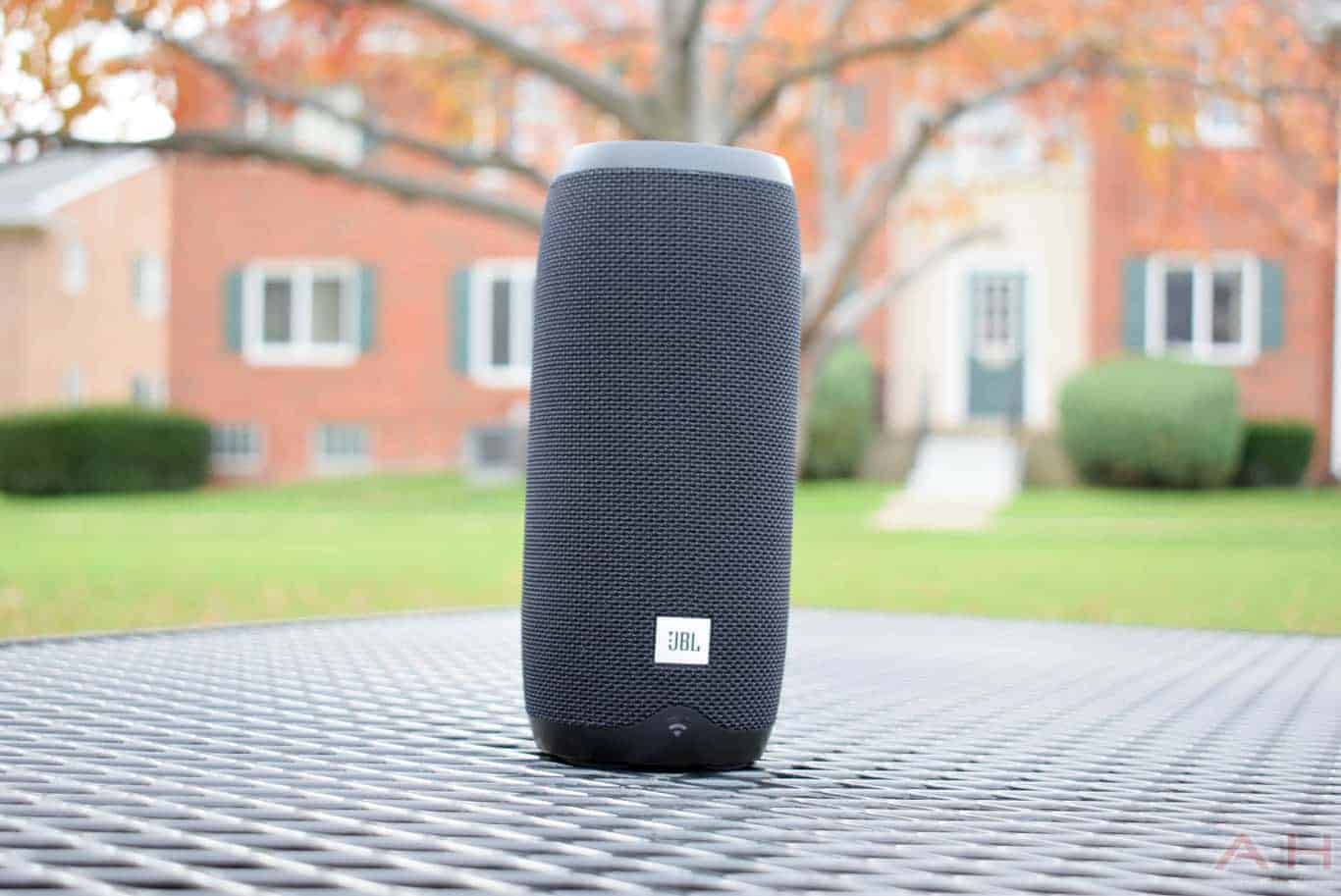 JBL LINK 20 is a fairly heavy speaker, compared to some others at this size and price point. But the reason for this is likely the larger battery. Since this is a Google Assistant speaker, it is going to be always-listening, which means battery life won't be as good. But JBL was able to still get this one up to around 10 hours on a single charge. That's pretty impressive, and while it is still a bit lower than most other Bluetooth speakers these days, considering it is always listening, it's actually pretty good. 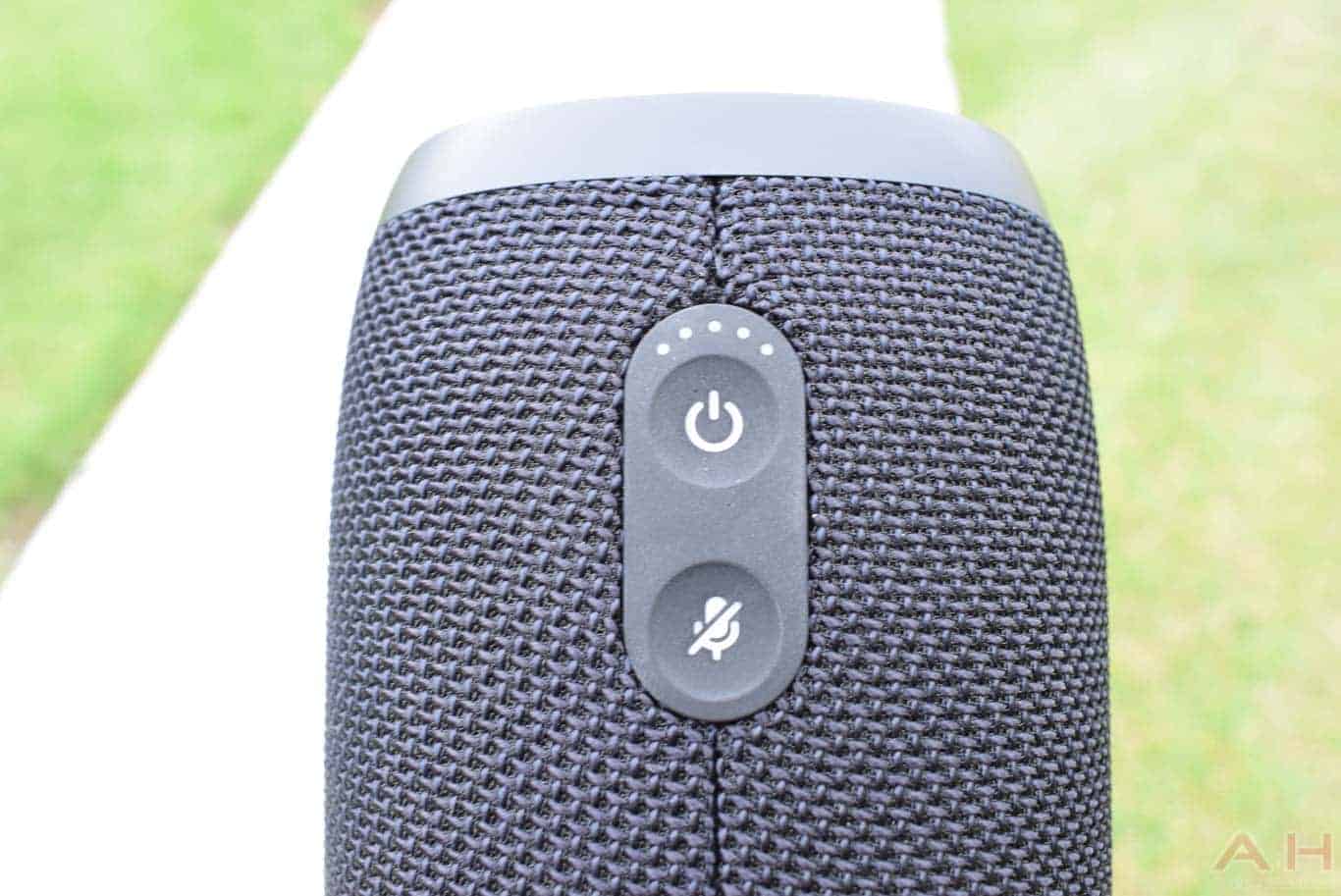 There's 360-degree sound here on the JBL LINK 20, which means it'll be able to fill an entire room with sound. The 360-degree audio is a feature that JBL has been using for quite some time, in fact you'll find that the majority of their speakers are 360-degree, and many of its competitors are moving that way as well. We'll talk more on the sound in a bit, but it's pretty good. Now there is also a WiFi indicator on the front of the JBL LINK 20, this is because it is also a WiFi connected speaker, so it'll light up when it is connected to a WiFi network, versus streaming over Bluetooth. Unlike some of the other JBL speakers, the LINK series is only available in black and white, which still looks pretty good, but having it in a few other colors would be pretty cool as well. 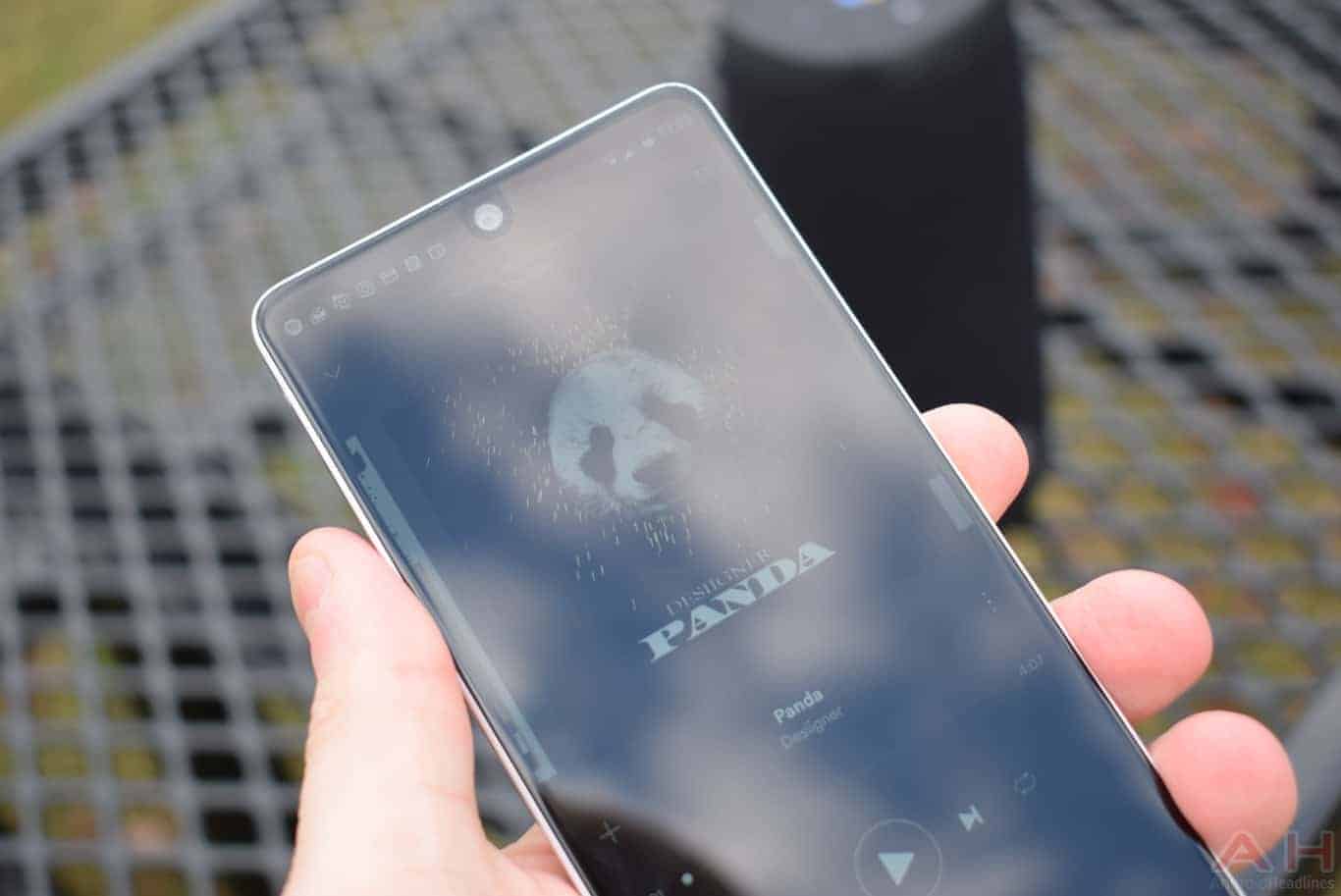 The sound from the JBL LINK 20 is pretty good, this should be the same for both the LINK 10 and LINK 300 with the LINK 300 obviously being quite a bit louder and perhaps having deeper bass. The LINK 20 does have some deep bass, but also some crisp mids and highs. The LINK 20 does have a wide range for volume as well, I typically have it fairly low while listening to music while writing, but it can get loud enough to fill up most rooms, even larger ones. In fact, it could even fill some smaller apartments or homes with music as well. While some cheaper speakers may start to distort once you turn up the volume, that is not the case with the JBL LINK 20, it sounds rather impressive.

Part of the reason for the sound quality being so good is the fact that it is streaming over WiFi. By streaming over WiFi, JBL is able to take advantage of the added bandwidth when compared to Bluetooth. This means that it can handle better quality audio without any issues. Now you may notice a difference when streaming over Bluetooth versus WiFi, but it likely won't be a huge difference. We did try it with Bluetooth and did notice a small difference, but nothing to major.

Since this is a Google Assistant-enabled speaker, JBL has decided not to add JBL Connect+ support for this speaker – which is the app to connect multiple JBL speakers together for multi-room audio. Instead JBL is using Google Assistant and Chromecast for multi-room audio. So you can still pick up two JBL LINK 20's and sync them up, over Google Assistant. Or you could pick up a JBL Flip 4 and a Chromecast Audio dongle and do the same thing. It's not quite the same thing, but for most customers, it will be a better experience. 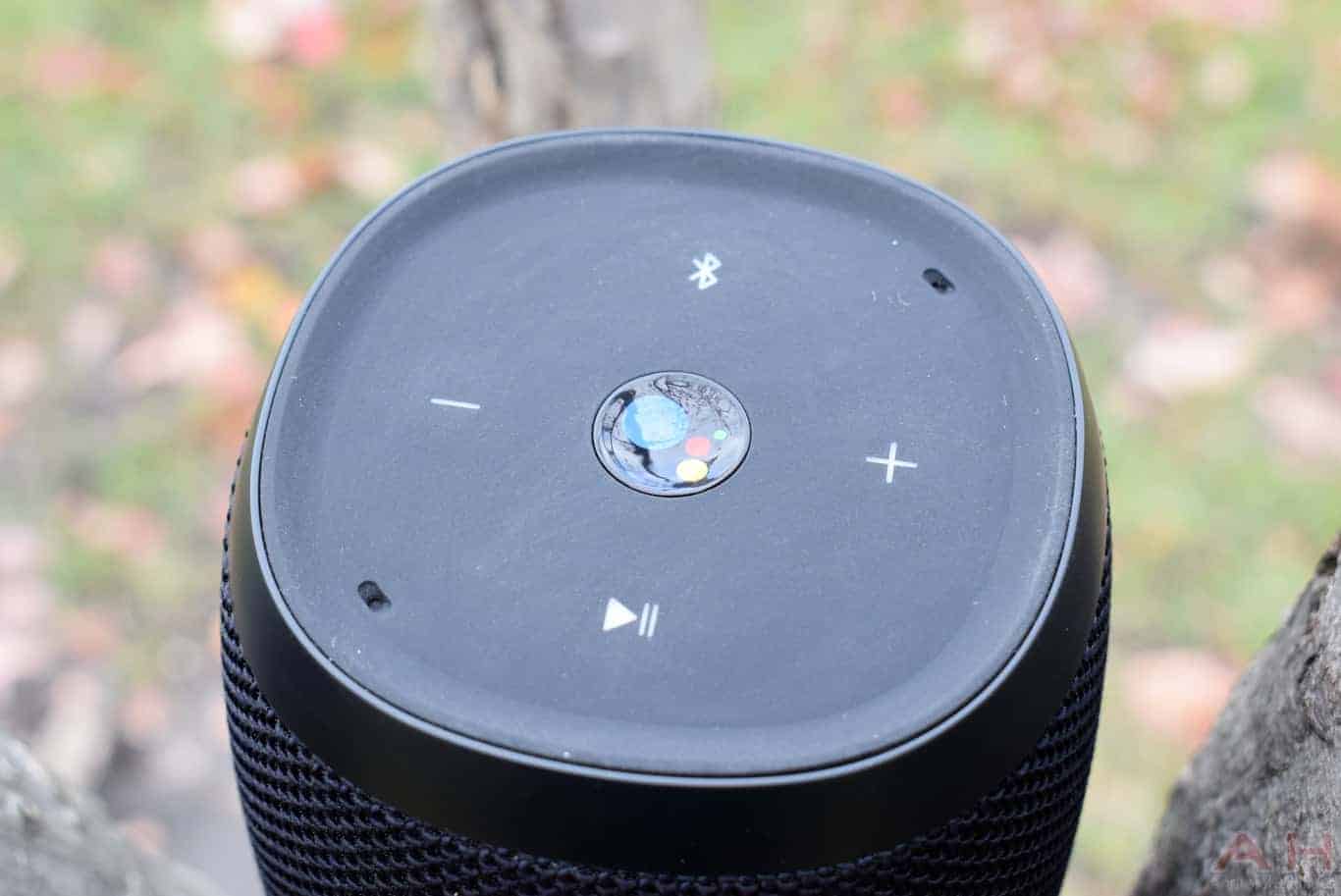 This is one of the first third-party Google Assistant speakers out there (brace yourselves, there will be loads more coming in the coming months, especially at CES in January). And the experience is pretty comparable to the Google Home. This is a bit surprising, given how Amazon limits third-party Alexa speakers functionality. The skinny here is that everything you can do with the Google Assistant on Google Home, you can do on the JBL LINK 20, and it's portable. This means that it can turn on your lights, adjust your thermostat, and much more within your smart home. Of course, you can also ask the Assistant many different questions, have it set timers, alarms, create lists and so much more.

There are far field microphones included here, and in our experience, the Google Home and JBL LINK 20 picked up the "OK Google" command about the same amount of times. What this means is that the microphones in the LINK 20 are the same as in the Google Home. It is good at listening to you, and not triggering from a commercial on TV (an Alexa speaker has been doing that to me lately), and you also don't have to scream across the room to get its attention, that's something else that the Echo sometimes struggles with. So this is definitely a good speaker, especially if you don't want to use Alexa, but Google Assistant instead.

The "portable" aspect here for Google Assistant is something that I'm not sure is going to be a selling point. Yes having a portable Google Assistant-enabled speaker is a good thing, but I'm not sure anyone will buy the JBL LINK 20 solely based on that. Considering we all have Google Assistant on our smartphones, even those on iOS, which is always in your pocket anyways. But being able to take the JBL LINK 20 outside in the summer and saying "OK Google, play Despacito on Google Play Music" is definitely a good feature to have. 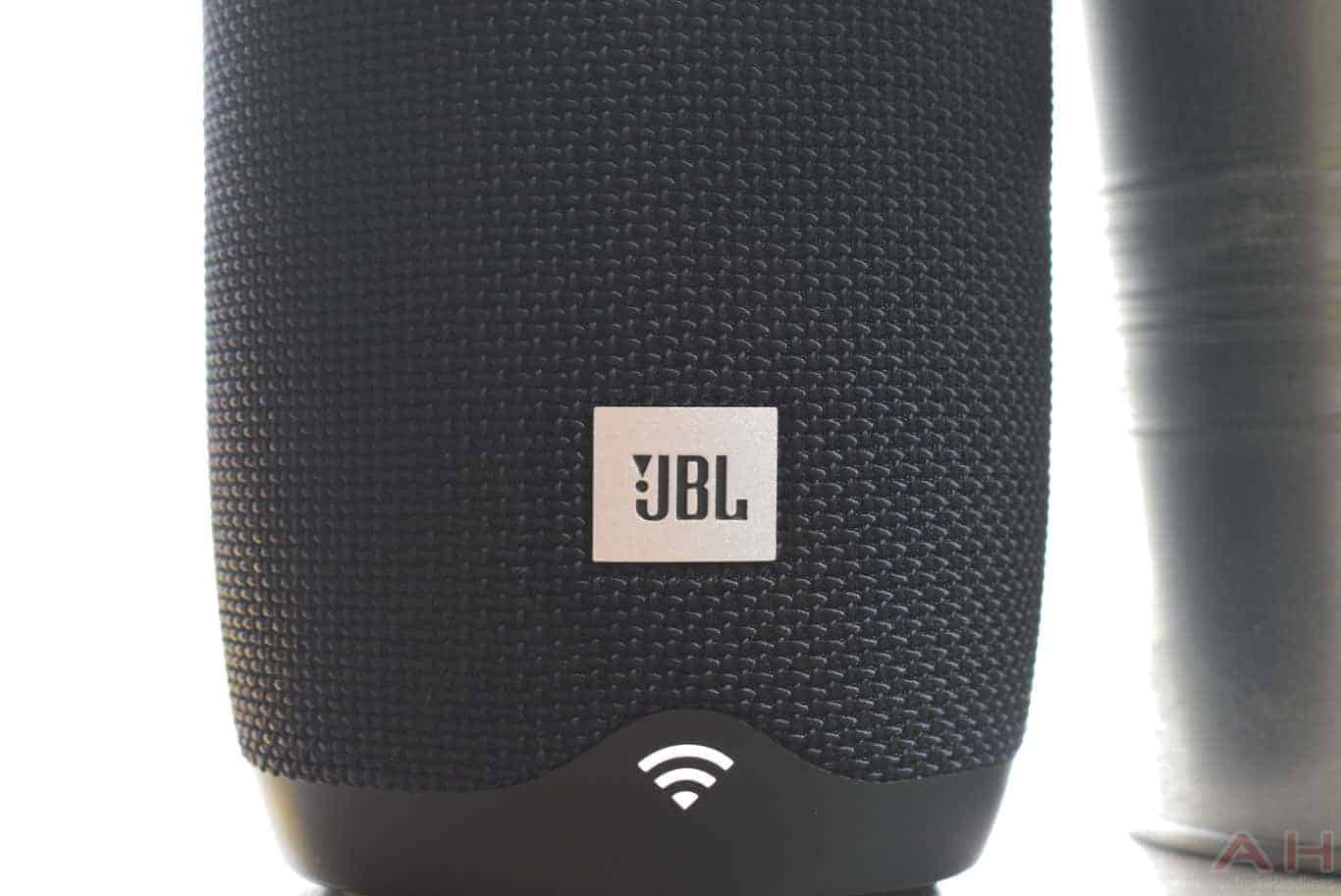 Battery life is about what JBL has said it would be, right around 10 hours. Usually with Bluetooth speakers, the battery life will depend on the volume of your music, how long it has been on standby, and what kind of music you are listening too – for example, bass-heavy music will use more juice than those that aren't. But in our experience, streaming over WiFi the majority of the time, we were able to get right around 10-11 hours of playback. It was a bit longer with Bluetooth, but about an hour longer. So nothing to impressive really, but still noteworthy if you wanting it to last as long as possible.

It is worth noting that if the speaker is not plugged in, and it is not playing any music, it is not always listening and will actually turn itself off. So you will need to turn it on, in which case it will take a few minutes to start up, and then you'll be able to get started with Google Assistant and playing music. When it comes to connectivity, it worked just as advertised. We never experienced any issues with the JBL LINK 20 losing connection to WiFi and/or Bluetooth. It never lost connection with the device that was streaming to it either, so both WiFi and Bluetooth are rock solid here, which is good to see. 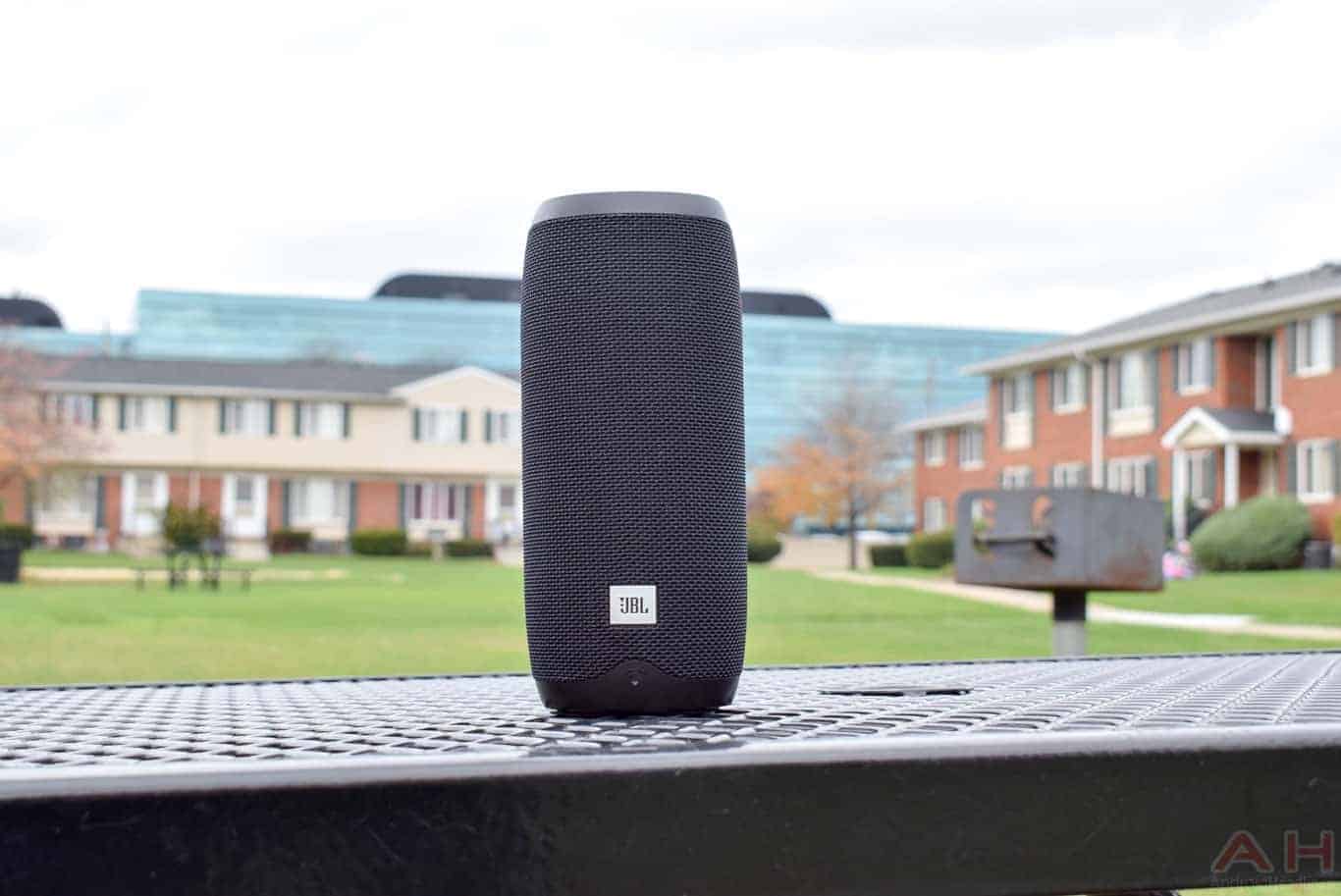 The JBL LINK 20 is a good alternative to the Google Home, although it is a bit more expensive. JBL sells the LINK 20 for $199 (the LINK 10 is $149 and LINK 30 is $299), so it is a bit more than a Google Home, but still cheaper than a Google Home Max which would be more comparable to the LINK 30. The main advantage that the JBL LINK series has over the Google Home, is the better sound quality and portability (except on the LINK 30). For most people, the sound quality difference isn't going to be huge, but audiophiles will definitely prefer the LINK 20 over the Google Home. Of course, being waterproof and portable is a big deal here, and those that don't want Google Assistant tied to a wall outlet all the time will definitely love this speaker.