According to preliminary data from the International Data Corporation (IDC), the tablet market continued to decline in the third quarter of the year by 5.4 percent, despite the fact that four out of the five top tablet vendors have experienced year-over-year growth (YoY). The research firm reveals that roughly 40 million tablets have been shipped globally throughout the 3rd quarter of 2017, with Apple leading the pack, followed by Samsung, Amazon, Huawei, and Lenovo.

IDC’s preliminary data indicates that Apple shipped 10.3 million tablets in Q3 up from 9.3 million a year ago, and managed to secure 25.8 percent of the market, up from 21.9 percent in Q3 2016, representing a year-over-year growth of 11.4 percent. IDC claims that Apple’s lower-priced iPads and the new version of iOS helped the tech giant secure the first place. Meanwhile, Samsung has experienced a 7.9 percent YoY decrease with 6 million tablets shipped in Q3 down from 6.5 million last year and is now holding 15.0 percent of the market as opposed to 15.4 percent. Reportedly, while Samsung offers a wide range of tablets with different configurations and sizes, its detachable tablets have accounted for less than 10 percent of shipments in Q3 and the company continues to rely on lower-cost products such as the Galaxy Tab A and E series. The third place goes to Amazon who is looking at 4.4 million tablet shipments over the third quarter, up from 3.1 million a year ago. Amazon’s tablet market share also grew from 7.5 percent to 10.9 percent, and the company experienced massive year-on-year growth of 38.7 percent. This is largely attributed to its aggressive strategy for pushing low-cost hardware like the Fire 7 at an affordable price, which appears to have created a long-standing relationship with its user base. Lastly, Huawei and Lenovo have adopted a similar strategy for pushing low-cost devices in Western Europe and Asia/Pacific, and both OEMs now occupy the fourth place with 3.0 million tablets shipped in Q3, each. Huawei currently holds 7.5 percent of the tablet market while Lenovo’s products account for 7.4 percent, and both have experienced year-over-year growth of 18.8 and 8.9 percent, respectively.

According to Jitesh Ubrani, senior research analyst at IDC’s Worldwide Quarterly Mobile Device Trackers, although the need for low-cost tablets seems to continue, many of the units shipped this quarter are “long-awaited replacements” for existing consumers switching from an older model. As a result and given that the segment continues to find itself in an awkward middle ground between smartphones and PCs, the tablet market finds it increasingly difficult to acquire brand new users, and the existing user base will likely continue to decline in the coming years. 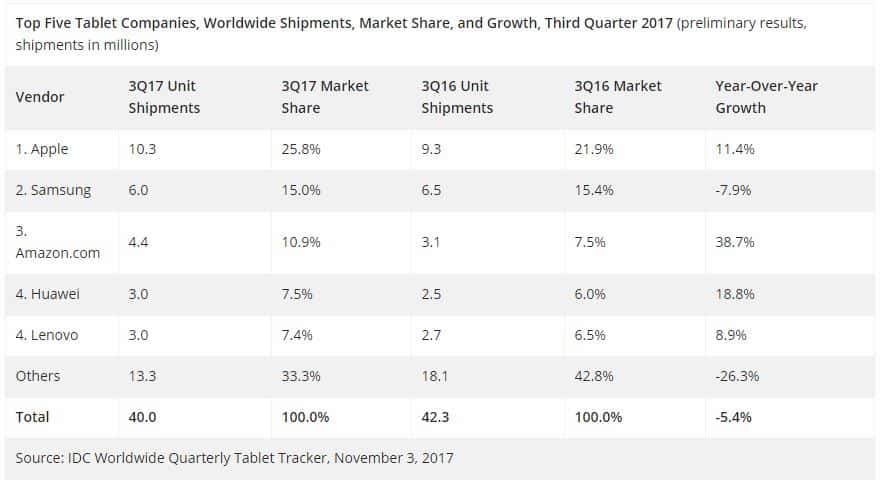 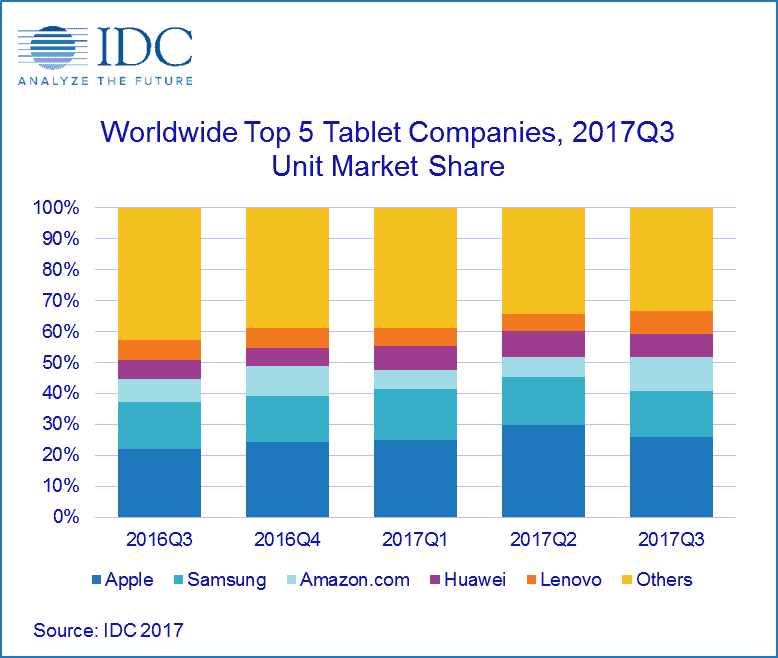