Honor has just announced its new flagship smartphone in China, the Honor V10. The Honor V10 had been leaking for weeks now, the device got certified by TENAA (China’s equivalent to the FCC) a while back, and it seems like most leaks were spot on when it comes to this smartphone. The Honor V10 is made out of metal, it comes with rather thin bezels, and it sports a dual camera setup on the back. Those two cameras protrude a bit on the back of this device, while the power / lock and volume rocker keys lie on the right-hand side of the device.

Now, interestingly enough, most leaks were not right about one thing, the phone’s fingerprint scanner placement. The device actually comes with a front-facing fingerprint scanner, not a rear-facing one, and despite that fact, the bezels on this handset are not thick at all, they’re actually quite thin. That fingerprint scanner doubles as the device’s home key, as expected. Now, in terms of specs, the Honor V10 actually comes with a rather large display, it sports a 5.99-inch fullHD+ (2160 x 1080) panel, which sports a 2.5D curved glass on top of it. As you can see, we’re looking at an 18:9 display ratio here, as expected. The phone actually comes in several variants, both 4GB and 6GB RAM models will be available, the 4GB RAM variant will be available with 64GB of storage, while the 6GB RAM model will ship in both 64GB and 128GB storage flavors. Huawei’s Kirin 970 64-bit octa-core processor fuels this handset, that is the company’s AI chip which had been included in the Huawei Mate 10, Mate 10 Pro and PORSCHE DESIGN Mate 10. The Honor V10 features a 3,750mAh battery on the inside, while fast charging (22.5W) is included in the package as well. This smartphone includes two SIM card slots, and we’re looking at a hybrid dual SIM setup here. On the back of the phone, you will be able to find 16 and 20-megapixel shooters (f/1.8 aperture), we’re looking at RGB and monochrome sensors here, respectively, which is something we’ve seen on previous Huawei and Honor smartphones.

Android 8.0 Oreo comes pre-installed on the Honor V10, while you will be able to find Huawei’s Emotion UI (EMUI) 8.0 on top of it. The Honor V10 was announced in several color options, the phone will be available in Aurora Blue, Red, Gold and Black color variants, at least in China, and it is only 6.97mm thick. Now, as far as availability and pricing are concerned, the 4GB RAM version with 64GB of storage is priced at 2,699 Yuan in China, while the 6GB RAM variant with 64GB of storage costs 2,999 Yuan. The most expensive model with 6GB of RAM and 128GB of storage is priced at 3,499 Yuan in China. Either of these variants can be pre-ordered in China already, and the device will be available for purchase starting from December 5. 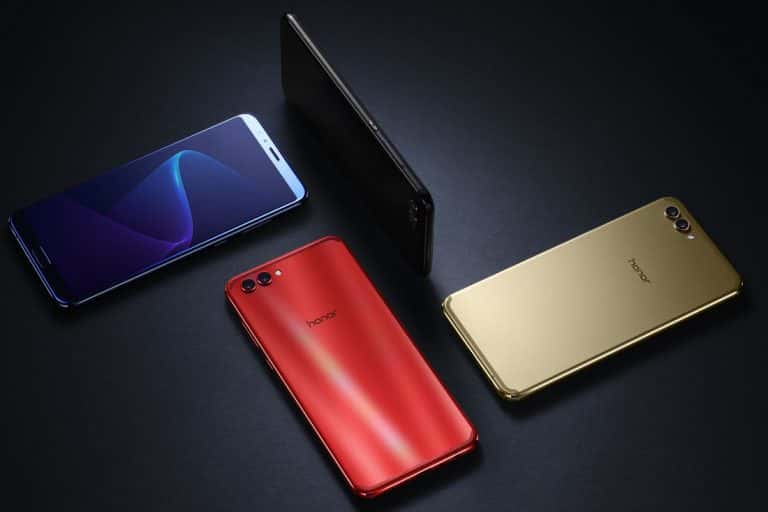