Google Photos now has a shortcut that will allow users to instantly get a photo into an outside editing app of their choice, as of version 3.9, which should be live in the Play Store for all users as of this writing. The shortcut in question, as shown in the screenshots below, is quick and simple; when pressed, it pops up a list of other photo editors that a user has on their device, and can instantly open the image up in one of those apps to get the job done. It's unknown right now just how inclusive the list of supported photo editors is, and it's safe to say that some more niche ones may not make the list or be seen by the app picker.

Google Photos' built-in photo editor is useful for applying filters or editing some aspects of how photos look, but making major edits, spot-on touch-ups, or adding in things like objects, watermarks, backgrounds, and frames all has to be done in other apps. This change will allow users to do that with relative ease, right from within the Google Photos app. Users can even make basic edits in the Google Photos app, then export the edited photo to an outside editor for the heavier lifting. Naturally, photos edited elsewhere can be put right back into the Google Photos editor for finishing touches, such as putting greyscale on a colored photo frame or tweaking the light balance of a changed background.

Google Photos has been rolling out a number of minor changes lately, staying largely the same app and serving the same purposes, but becoming better and better at what it does in small ways. One example of this is a new lens animation for Pixel devices. The app also seems to be working toward having all of its various bugs fixed, along with minor UI inconsistencies and other small issues. When all is said and done, Google Photos has its purpose, being a centralized cloud backup and searchable viewing hub for all of a user's photos with some minor sorting and editing chops, and its current feature set fulfills that purpose quite well. 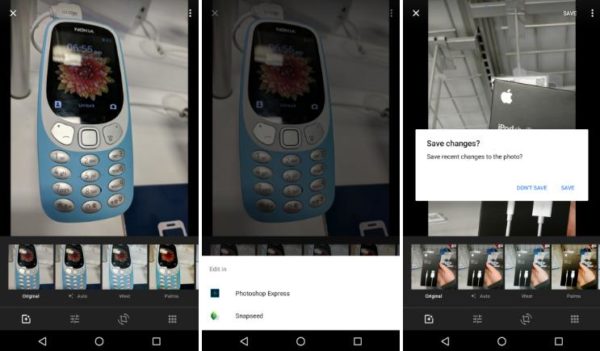