Tech giant Foxconn has a vested interest in seeing self-driving cars succeed, and is thus studying the possibility of rolling out dedicated lanes for such vehicles, starting with Interstate 94, a major highway that runs through Wisconsin. According to local transit authorities, this is one of many proposals that are currently being evaluated regarding how to integrate fully autonomous vehicles into normal traffic in the state. Foxconn’s proposal in particular is currently only in the research stage; all involved parties are conducting research and weighing out the proposal to see how feasible it may be, and how it stacks up to other proposals of a similar sort.

The goal of the proposal is twofold; not only would a dedicated lane for self-driving cars make things safer and faster for riders, who would not have to mingle with human drivers in traffic, but it would also provide a perfect testing ground for benchmarking self-driving cars as they cruise through I-95 unimpeded. Self-driving cars are made to handle the hazards of everyday city driving, but flying down the highway is an area where test data has thus far been plentiful, but not exactly varied. There are, of course, obvious setbacks. For starters, this would mean less lanes for human drivers. That means that the amount of people taking advantage of the self-driving cars in the special lane would have to outweigh the loss of that lane, or it would make traffic on I-95 slower and more chaotic in general by packing drivers that would previously have used the lane into the other lanes. Another possible setback is the very real probability that a frustrating traffic jam will cause a driver in the normal lane to cheat by swerving into the autonomous lane, if not multiple drivers, which could throw self-driving cars off by presenting an element that goes against expectations.

For its part, Foxconn is ready to commit 13,000 employees to a stretch of I-95 to help convert it. The proposal is feasible to execute, but the real question is how much benefit it will hold for motorists. Metropolitan Milwaukee Association of Commerce president Tim Sheehy said that the entire association was “dumbstruck” at the very idea of the proposal at hand, but will be giving it a fair chance among the many other potentially viable solutions that are increasingly being submitted as the advent of the publicly usable self-driving car grows nearer and nearer. 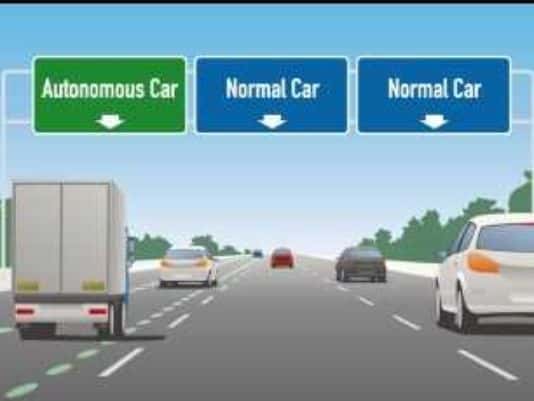