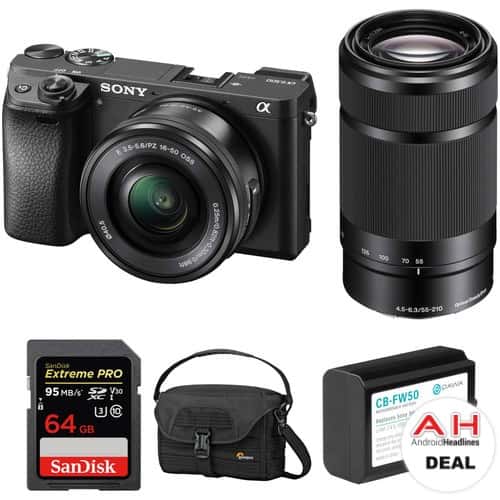 B&H Photo has a pretty good deal on the Sony a6300 Mirrorless camera right now. It's offering up a two-lens bundle which includes the kit 16-50mm lens, along with a 55-210mm lens. But that's not all, you also get a 64GB SD card as well as a spare battery, two things that can really come in handy with a brand new camera. This is about $350 off of the regular price for this bundle, which even at its regular price is a really good price considering the price of everything included here.

The Sony a6300 is not the newest mirrorless camera from Sony, but it will still work really well. This one here has a 24.2-megapixel sensor, and can shoot at 4K. Now since this is a pretty small camera, shooting in 4K does make it pretty warm. So unfortunately you aren't going to be able to shoot in 4K for very long, but it is a possibility. It can also do 1080p in up to 120 frames-per-second so you do get some slow-motion capabilities here. This is a mirrorless camera which makes it smaller than a DSLR, but it can still accomplish everything that a DSLR can. It's called a "mirrorless" camera because DSLR's use mirrors to go from the lens to the actual sensor to create the picture, and this camera takes that part out and often times leaves you with a better picture. Having both the kit 16-50mm and the 55-210mm lens included here is a big deal. That 55-210mm lens usually goes for around $350 itself.

Advertisement
Sony Alpha a6300 Mirrorless Digital Camera with 16-50mm and 55-210mm Lenses and Free Accessory Kit
$996
Buy Now!
Trusted By Millions
Independent, Expert Android News You Can Trust, Since 2010
Publishing More Android Than Anyone Else
13
Today
13
This Week
505
This Month
3017
This Year
104496
All Time
Advertisement