Strategy Analytics has released its latest report detailing the current smartphone landscape within the US. In particular, the report looks at how the smartphone marked shaped up during the third quarter of 2017 with a focus on how many smartphones were shipped by the major smartphone makers and how those numbers equate to market share for those companies.

As for market share, these figures mean that Apple managed to retain the biggest share (30.4-percent) of the quarter, although this is down from the 32.5-percent it occupied during the same quarter in 2016. All Android-related manufacturers showed a slight increase with Samsung climbing from 24.2-percent up to 25.1-percent, LG up from 16.2-percent to 17.2-percent, and ZTE up from 9.1-percent to 11.6-percent. As mentioned, although Motorola saw the least units shipped of the top five, due to its position in the US during the same quarter last year, its market share effectively doubled in Q3 2017, up from 2.7-percent to 5.2-percent. As Ken Hyers, Director at Strategy Analytics, points out, this sees Motorola returning “to a top-five ranking for the first time since 2015.” 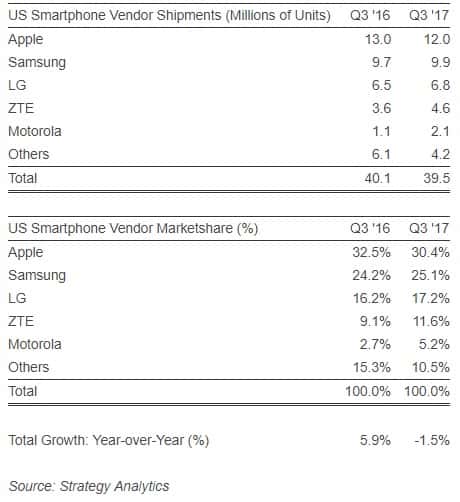