The latest developer version of Chrome OS comes with the option to enable multitasking (split-screen) when in tablet mode. This is something which has seemingly proved time-consuming to implement due to how long it has taken to arrive. However, with the influx of Chrome OS devices which now sport touch-based screens and Android app support, it is likely to be a feature which many Chrome OS device owners will have been waiting for.

While it is still not an announced feature by Google or the Chrome OS team, François Beaufort (via Google+) noticed a Chromium commit for the feature and has since confirmed it as working on the Google Pixelbook. Although the Pixelbook is Google’s flagship Chromebook, any Chrome OS device running the latest developer version (version 64) should be able to make use of the feature by enabling the “Split view in Tablet mode” flag, aka enable chrome://flags/#enable-tablet-splitview. Once active, the user can click on the relevant icon in the bottom right corner of the screen which will provide an overview of the open windows and from there, the user just needs to ‘snap’ a window to either the left or right side of the screen. It is worth noting that although the feature is now live for the developer version, it is one which does not currently seem to support many Android apps, if any. Which does largely means that this is currently only usable for the likes of the Chrome browser. Limitations such as this are as to be expected considering the reason it has to be enabled is due to it being more of an experimental feature at the moment. Let alone, an experimental feature on the developer channel. Speaking of which, there is no current time-frame of when it can be expected to become available via the stable version of Chrome.

This is not the first time this feature has been commented on however, as a previous commit was noted back in July of this year. That commit also looked to confirmed that the Chrome OS team was working on offering a windows management based solution to using a Chromebook in tablet mode. So not only has this been something in the works, but also something that has been expected to arrive in some form or another. You can see an example of how it looks and works in the image below. 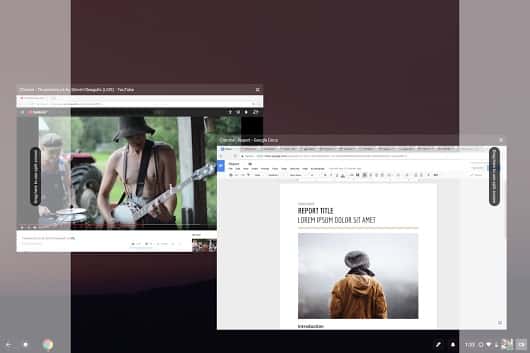