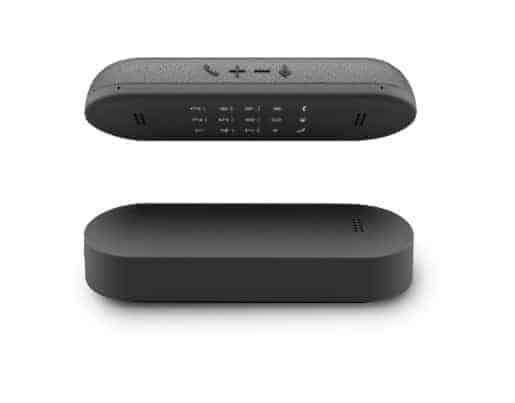 Besides the absolute basic phone feature you would expect – the ability to make calls – the Anywhere HQ is also listed as coming equipped with a smart assistant as well as hands-free voice control functionality. Which means once it is setup and running the user can voice command the Anywhere HQ to call someone and it will. The call can then be continued in a hands-free fashion thanks to the use of the included speakerphone, or at any point be picked up and taken as it would be with a cordless phone. While most smart speakers do offer this sort of functionality by piggybacking off a smartphone connection, what seems to be different here is that this one is connected to the phone number and not the actual phone. As it is part of the company's wider Republic Anywhere platform which allows customers to sync their phone number to multiple different devices, and across operating systems. The overall idea with the Anywhere HQ being that once you get home you can "disconnect" from your phone… by connecting to the Anywhere HQ.

Unfortunately, besides the general overview of the main features (and the attached images) there is next to no information available on the phone. Besides assuming the role of a cordless phone, Republic Wireless have yet to disclose any of the features in detail including what the included 'assistant' actually is. Although the Anywhere HQ is listed as supporting LTE and therefore will not be dependent on a Wi-Fi connection. Likewise, there is currently no firm details on when the device will become available to buy. Although according to the launch page, the Anywhere HQ has now entered the Republic Labs – which is the MVNO's beta testing ground for new products. Those interested in checking out the Anywhere HQ in more detail (and also finding out how to join the Republic Labs program as a beta tester), head through the link.