Xiaomi's long-rumored Redmi Note 5 has now cropped up on Geekbench. As with all pre-reveal information, the benchmark should be taken with a measured degree of skepticism since it could feasibly have recorded some aspects of the device inaccurately. However, if the benchmark is accurate, it may put a damper on some of the more exciting speculation pointing towards a more powerful mid-range device. Most notably, the benchmark contradicts earlier leaks which suggested the device might arrive with a Snapdragon 630 or 660 SoC. Instead, the test reveals the motherboard model as Qualcomm's msm8952, pointing to a more budget-friendly Snapdragon 617 chipset. That includes a 64-bit octa-core processor, coupled with an Adreno 405 GPU, which in this case is shown to have been clocked at 1.4 GHz.

That's likely to be a source of disappointment for some who had been anticipating Xiaomi's next Redmi Note handset. That's especially true since the downgraded SoC wouldn't support many of the features that the Redmi Note 5 was expected to arrive with. For starters, it won't include Bluetooth 5 and Quick Charge 4.0, if the benchmark is accurate. Instead, it would only support Bluetooth 4.1 and Quick Charge 3.0, without support for USB Type-C. With that said, it was previously reported that there would be at least two variants of the device, featuring either 3GB or 4GB of RAM. The model tested was shown to have only 3GB of RAM onboard and it isn't impossible to imagine Xiaomi could launch the variants with different SoC's on board, too. That could be a long-shot at best, but it may be best to continue withholding judgment until something more official is unveiled. Meanwhile, the handset is also marked as being driven by Android 7.1.2 (Nougat).

Aside from the specifications revealed by the benchmark, current rumors point to the Redmi Note 5 shipping with a generous 3,790 mAh battery that is non-removable. The front of the device will feature a 13-megapixel selfie shooter, while the main dual-camera setup around the back will be a 16-megapixel sensor with a f/2.0 aperture. On the storage side of the equation, the smartphone is expected to have either 32GB or 64GB of space. All of that is expected to be packed into behind a 5.5-inch Full HD screen with a bezel-less design and an 18:9 display ratio. 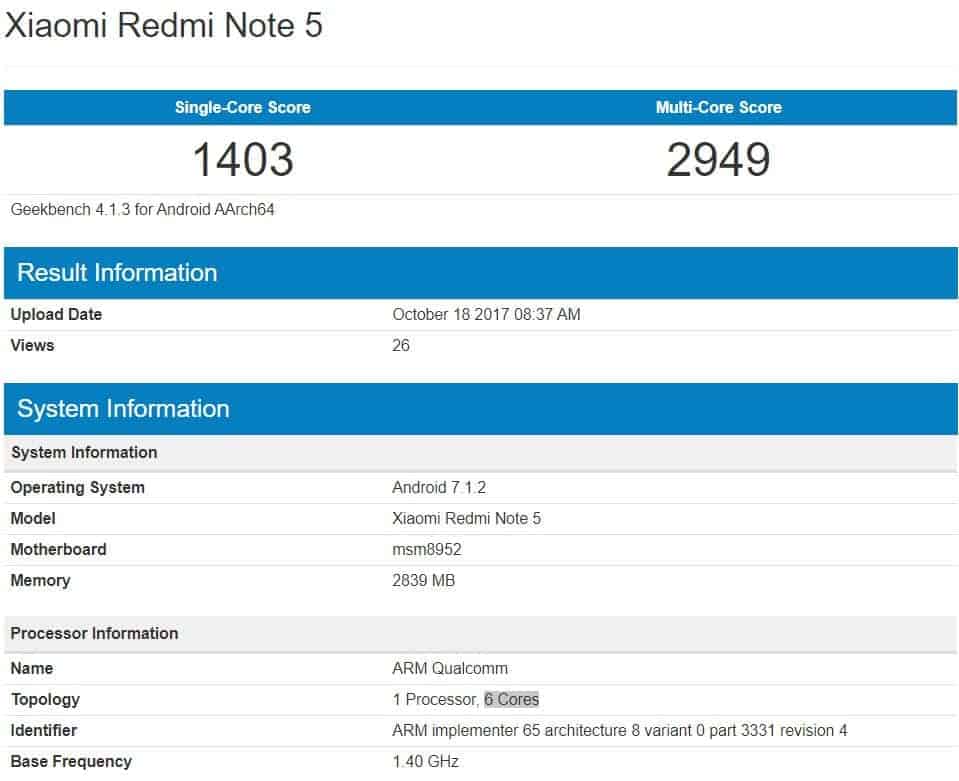