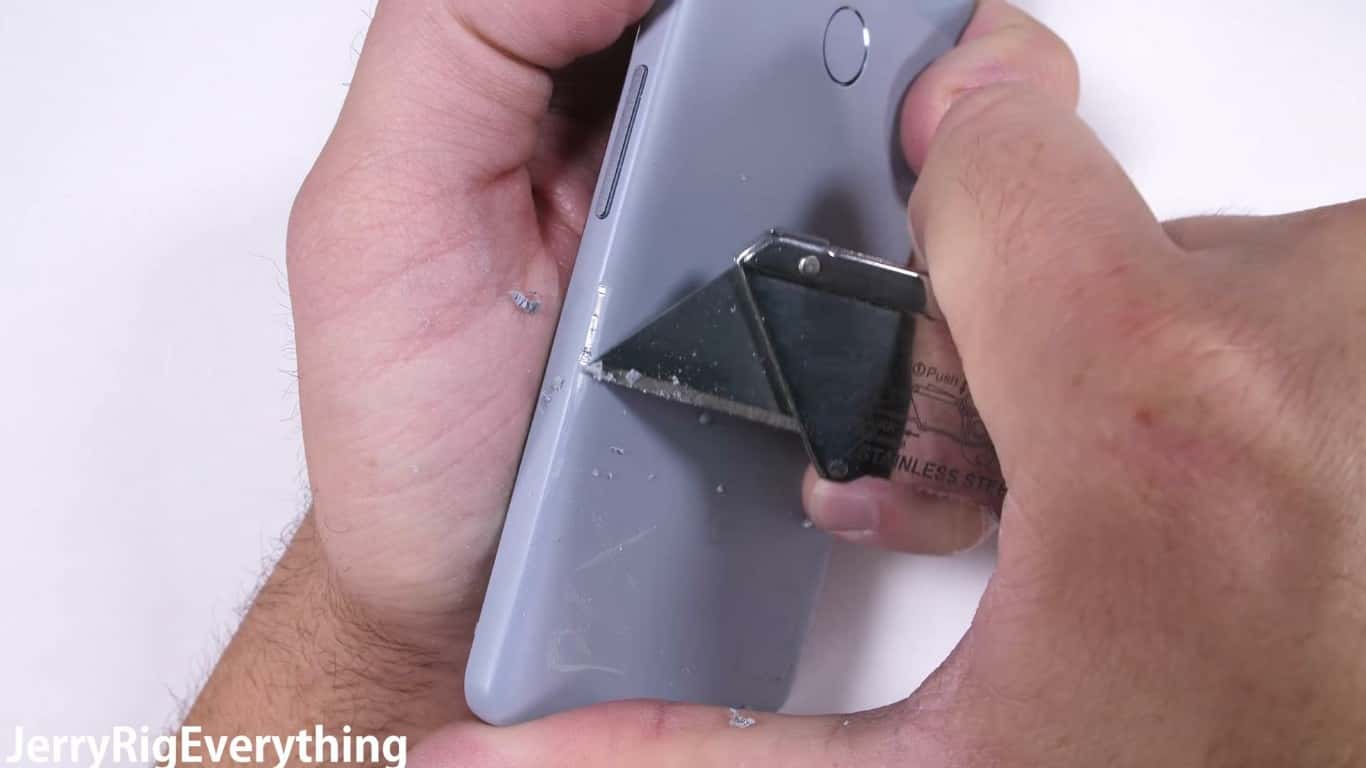 Google had introduced the Google Pixel 2 and Pixel 2 XL smartphones quite recently, and Jerry (from JerryRigEverything YouTube channel) has managed to get ahold of one Pixel 2 unit it seems, as he just posted the Pixel 2 durability test on YouTube. Now, as it usually goes, he submitted the device to a number of tests, ranging from exposure to fire and a scratch test, all the way to the bend test in order to see whether the phone will snap when he applies pressure to it. Having said that, you can check out the full test in the embedded video down below, and we'll get to it in the remainder of this article, read on.

The display scratch test took place first, and the Pixel 2's display was scratched with a level 6 pick, which is standard when it comes to the Gorilla Glass 5-protected displays. The Pixel 2's front-facing speakers come with a slate of metal on top of them, the earpiece is included in that package, of course, as it is located next to one of the two speakers, under the metal plate. The phone's front-facing camera is placed under the same Gorilla Glass 5 panel as the display, so it should be well-protected from scratches, and the same can be said for the rear-facing camera. The Pixel 2 is made out of metal (aluminum) but on top of it, Google applied what it calls 'premium hybrid coating', so it essentially means that your skin won't be touching metal when holding the Pixel 2, metal is placed underneath the aforementioned coating, as the provided video proves.

Moving on, the volume rocker is made out of metal, though the differently-colored power key on the 'Kinda Blue' variant of the Pixel 2 is made out of plastic, which is interesting. An LED flash on the back of the Pixel 2 is covered by plastic, which is actually a standard. The phone's main camera actually comes with metallic housing around it, which is raised a bit, so even if you drop it, the metal might get a hit, but the glass itself should not, the whole camera is protruding on the back a bit, though. The phone's display reacted to the fire test, it lasted for about 15 seconds, but it never recovered. Now, the bend test is the final test in every video on this channel, and unfortunately, the side of the Pixel 2 actually snapped after pressure was applied from the back side, as Google opted to include an antenna line in the world possible spot, right in the middle of the metal frame, below the SIM card tray. The phone still functioned fine after the bend test, it did not snap completely or anything of the sort, but the side now has a crack on it, and it's not water resistant any longer, of course. We're still not sure whether the same results apply to the Pixel 2 XL, though, there could be some differences.