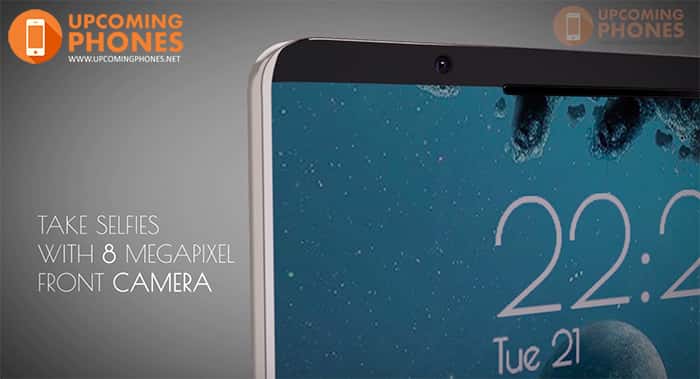 A new ambitious smartphone concept emerged online earlier this week, with one group of enthusiasts designing what they refer to as the Nokia 9 Edge and is essentially a much better and more capable version of the Galaxy Note 8. The Nokia 9 Edge seen in the video and gallery below adopts a bezel-free aesthetic of Samsung's latest phablet together with its soft corners and curved display panel but is significantly thinner than its likely role model and comes with a variety of additional features like a built-in projector and 8GB of RAM.

The rear panel of the concept device boasts a dual-camera setup entailing two 16-megapixel sensors arranged in a vertical manner and positioned immediately above a dual-LED (dual-tone) flash unit. Further below those modules is the aforementioned LED and infrared projector meant to mirror the contents of the phone's screen. Despite the fact that the Nokia 9 Edge is an extremely ambitious concept, the handset still doesn't feature an on-screen fingerprint reader and instead opts for a traditional rear-mounted sensor sandwiched between its projector and Nokia's signature branding. The creators envisioned two variants of the device which are visually identical and only differ in terms of memory configuration, with the base model having 6GB of RAM and 64GB of internal flash memory and the more premium version boasting double the storage space and 8GB of RAM.

While the team behind the concept claims that their design was based on the latest rumors about the Nokia 9, that doesn't appear to be the case, at least as far as widespread reports from somewhat credible sources are concerned. HMD Global is widely believed to be making a more bezel-less Android flagship called the Nokia 9 that may even have a slightly curved screen but that device is unlikely to look anything like these newly unveiled renders. Instead, the handset may actually be a redesigned version of the Nokia 8, the first premium addition to the famous Finnish brand in its post-Microsoft era which boasts high-end hardware but comes in a package with regularly sized bezels and generally doesn't follow the latest design trends in the smartphone industry. The Nokia 9 may hence be a bezel-less reimagining of the Nokia 8, much like the rumored HTC U11 Plus is said to be a more contemporary-looking revision of the original U11.