T-Mobile has announced that it wants to help customers get into the Halloween spirit, and will do so by offering special themed prizes for T-Mobile Tuesdays throughout October, including a free T-Mobile superhero cape, and a shopping spree on HalloweenCostumes.com, among others. The prize pool includes discounts at a number of stores, as well as chances at $25 and $200 gift cards for HalloweenCostumes.com. A Twitter contest will be held to give away a $5,000 gift card for the website, the wireless carrier confirmed. This month's giveaways will culminate with a grand prize package that will see one customer sent to London for Halloween to check out some of the city's spookiest spots and most harrowing haunts.

Aside from things that customers have a chance at winning, the October 10th giveaway will provide all customers with 25 percent off their order at HalloweenCostumes.com, giving those who didn't or won't win a giveaway for the site a chance to grab some Halloween gear. On October 17th, those who would rather make their own costumes and decorations will have a chance to do so, with 60 percent off of any one item at Jo-Ann Fabrics. People who read about a T-Mobile cape in the first paragraph and instantly started pining for one will have to wait until October 24th to actually don it. Finally, since the big day falls on a Tuesday this year, those who are too old to trick or treat or end up with a small candy haul can console themselves with a treat of their choice at Baskin Robbins, discounted by $2.

The more mundane thank-you gifts from T-Mobile will be getting a Halloween overhaul for the month of October as well. Discounts on sweets from Dunkin Donuts are on the menu, as well as Vudu and Redbox codes to help customers find a scary movie to embrace the season with. Lyft codes are on hand to help customers get to swanky Halloween parties, or anywhere else they may need to arrive, and T-Mobile hasn't been more specific on prizes beyond that, meaning customers will just have to wait until the themed prizes debut on October 10th to see what else the Un-Carrier has in store for them. 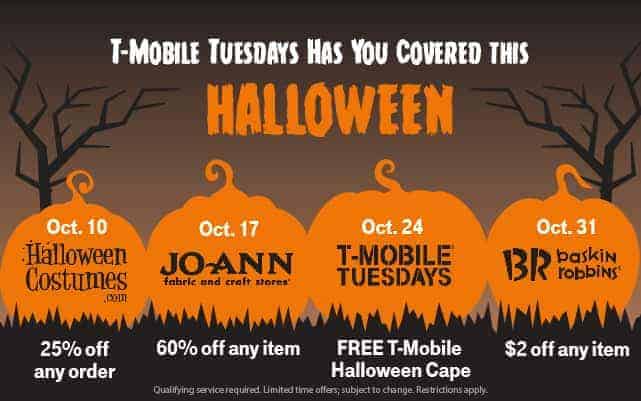