A new study from Chinese researchers has put Google at the top of the current AI market, by indicating that Google’s AI is not far off the level of intelligence displayed by the average six-year old child. The same study looked at AI solutions from Apple, Baidu, and Microsoft, all of who failed to match Google’s AI products in sheer brainpower. Google’s AI IQ came in at 47.28 points, more than halfway to matching the average six year old child at 55.5 points. This is up from 26.5 points back in 2014, meaning that the score nearly doubled in a span of only three years.

As for the AI products that ranked behind Google, Baidu’s product was a distant second with 32.92 points, a small difference from third placer Microsoft’s Bing AI, which scored 31.98. Apple’s AI-based Siri assistant, meanwhile, rounded things out with a fairly big drop down to 23.94 points for fourth place. That low score for Apple is actually lower than Google’s 2014 score, and even below Baidu’s 2014 score of 23.5. Back then, neither of the other two major companies in the current data set were even among the top 13 back in 2014, with Portuguese firm clix netting that position by virtue of a score of 16.5 points.

The AI’s IQ in this study was based on a model that considers data, information, knowledge, and wisdom. This means that AI are ranked on factors that affect their amount of available data, usefulness, and ability to synthesize information. The ranking takes AI into account in the form that they’re intended to be used, which means that cloud-based AI, which all of these are, cannot achieve a high ranking by virtue of the vast store of information available to them alone. AI needs to demonstrate understanding, critical thinking, learning, and synthesis to rank well, and how difficult those factors are for an AI affects their weight in the total IQ score. Using the quantification method created for this study back in 2014, AI are analyzed in much the same way as human subjects. To put all of these results in a good frame of reference, this quantification method finds that the average 18 year old human scores 97 points. Below is an overview of how the various AIs scored and how they compare on average to humans of varying ages. 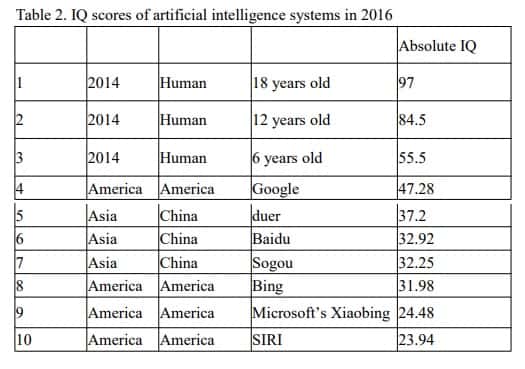