An unannounced Samsung device with the model number SM-A730F recently appeared in the Geekbench database, and it’s believed to be none other than the Galaxy A7 (2018). The benchmark listing reveals some core specifications of the handset which appears to a an offering meant to compete in the higher mid-range market segment. The smartphone should be a direct successor to the Galaxy A7 (2017) with notable improvements and likely a significant upgrade in terms of design. Recent rumors indicated that the Galaxy A7 (2018) will sport the bezel-less Infinity Display seen on the current Samsung flagships, with its new sighting now also suggesting improved specs, including a new Exynos processor and double the RAM of its predecessor.

Seemingly confirming recent rumors, Geekbench lists the purported Galaxy A7 (2018) with the Exynos 7885 chipset under the hood, clocked at 1.59GHz. Based on previous leaks, the Exynos 7885 will be an octa-core processor manufactured using the 10nm FinFET process, comprising two A73 cores, six A53 cores, and the Mali-G71 GPU. Judging by the benchmark scores, the Exynos 7785 may offer similar performance to some newer mid-range Snapdragon processors from Qualcomm. The benchmark further notes that the smartphone will pack 6GB of RAM, marking a huge bump from the 3GB of RAM found inside the current Galaxy A7 (2017). When it comes to scores, Geekbench lists a single-core performance of 1,490 and a multi-core performance of 4,172.

The benchmark further lists the Galaxy A7 (2018) with Android 7.1.1 Nougat on board, but that’s likely just the version it ran during the tests and not necessarily the version it will run when it makes its official debut. Geekbench doesn’t offer additional spec details, but some recently leaked renders indicated that the smartphone will sport a 6-inch Infinity Display, a single rear camera, dual front cameras, a rear-facing fingerprint scanner, and a USB Type-C port. The handset is expected to boast IP68 certification for dust and water resistance and a metal-and-glass casing. Samsung’s next-generation Galaxy A series could make its debut in early 2018, filling the space between the low-end Galaxy J series and the high-end Galaxy S and Galaxy Note lineups, though it remains to be seen whether all of its upcoming mid-rangers will also adopt Bixby. 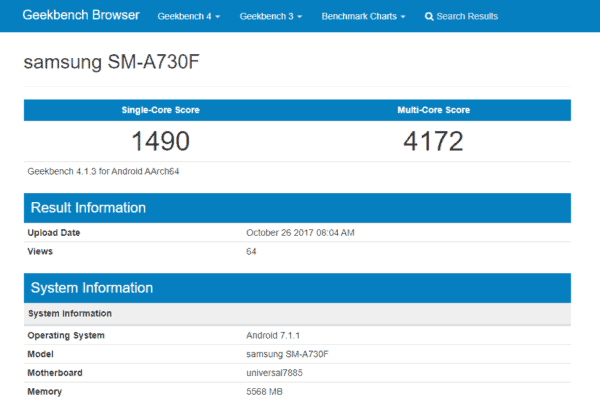