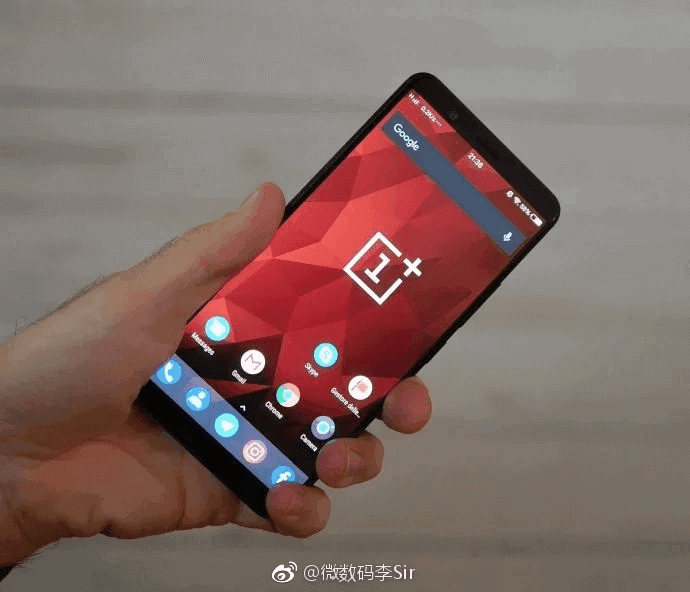 The OnePlus 5T keeps popping up, the alleged OnePlus 5T real life image has just surfaced. This image popped up on Weibo (China's social media network), and it's showing off the front side of the device. Truth be said, this phone looks identical to the upcoming OPPO R11s, at least based on leaks of that phone, and the OnePlus 5T is actually expected to be based on the OPPO R11s, so there's that.

In any case, as you can see, the display is powered on here, which gives us a look at the UI on the phone, which looks somewhat different than the OxygenOS we're used to. This is either a fake leak with a custom launcher on top of it, or OnePlus plans to make some changes in OxygenOS for the OnePlus 5T. As you can see, the network info is placed in the top left corner of the display, while the clock is included in the middle of the phone's top row. This phone sports really thin bezels, which is easy to see here, considering that its display is powered on, and the display corners seem to be rounded, though not to a huge degree. There are no keys included on the front side, which suggests that a fingerprint scanner will be included on the back, as leaks have been suggesting for quite some time now. All in all, it is possible that this is the OPPO R11s which is running a custom launcher or something like that, in any case, the device will be made out of metal, and you can expect to see a dual camera setup on the back.

Having said that, the alleged OnePlus 5T actually surfaced on AnTuTu quite recently, and OnePlus' CEO shared a camera sample from the device, well, at least it seems like it based on Carl Pei's Twitter post. The OnePlus 5T is said to ship with a 6-inch fullHD+ (2160 x 1080) AMOLED display, though the phone will keep a similar footprint like the OnePlus 5, despite the fact its display will be considerably larger. Android 8.0 Oreo will ship out of the box on the OnePlus 5, while you'll find a new version of OxygenOS installed on top of it. Qualcomm's Snapdragon 835 64-bit octa-core processor will fuel the OnePlus 5, and chances are we'll get both 6GB and 8GB RAM variants of the OnePlus 5T.