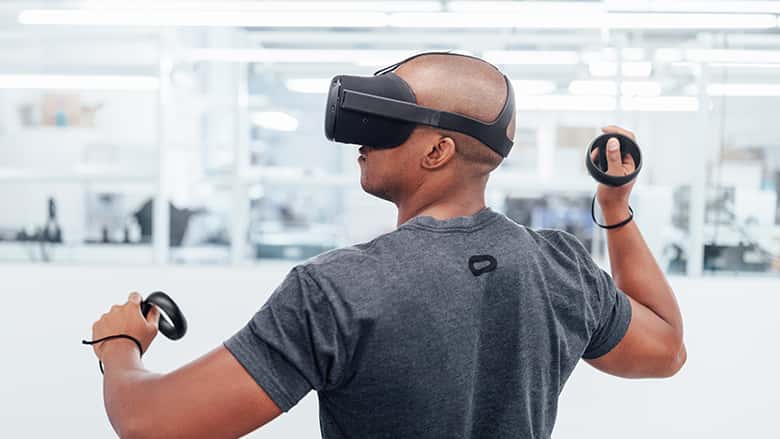 Oculus Rift is a great VR headset from the company, however the main issue that it has (and so does the HTC Vive), is the fact that it is tethered. In order to provide a great experience, it needs to be attached to a computer that is broadcasting data to it, like a game. But that might be a thing of the past. Oculus revealed today that it is working on Project Santa Cruz, which is in its early development, but it's going to be an untethered VR headset, that does also support 6 degrees of freedom or 6DOF.

Last year at Oculus Connect, the company debuted Project Santa Cruz, which basically had a mobile computer strapped to the back of your head. Now, a year later, that has been removed, and it's clear that Oculus has made a lot of progress on this product. Oculus notes that the product shown today "delivers hand presence with two positionally tracked controllers." The company touts that this is still an industry-first milestone and it helps to bring the magic from the Touch controllers sold with the Oculus Rift, to a standalone experience. Oculus also noted that it used the same constellation tracking technology that was used on Rift and Touch. Also noting that the infrared LEDs on Santa Cruz controllers to work with the sensors on the headset was a huge problem for engineering, design and computer vision. And thus, it's a milestone that the company is very proud of.

Despite showing off Project Santa Cruz again this year at Oculus Connect, the company did note that it still has a lot of work to do on the product before it'll be ready for the public. Like it was with the Rift, it'll likely be a few more years before Santa Cruz debuts on the market, and is available for purchase at Amazon. Rift debuted at CES and didn't make it to store shelves for nearly five years. Standalone VR isn't something that Oculus is new too, after all it does develop the Gear VR for Samsung. However that does work off of your phone. Project Santa Cruz will not be a mobile-based virtual reality experience, and will offer a better experience than Gear VR, which is why it's taking Oculus so long to get it out the door.