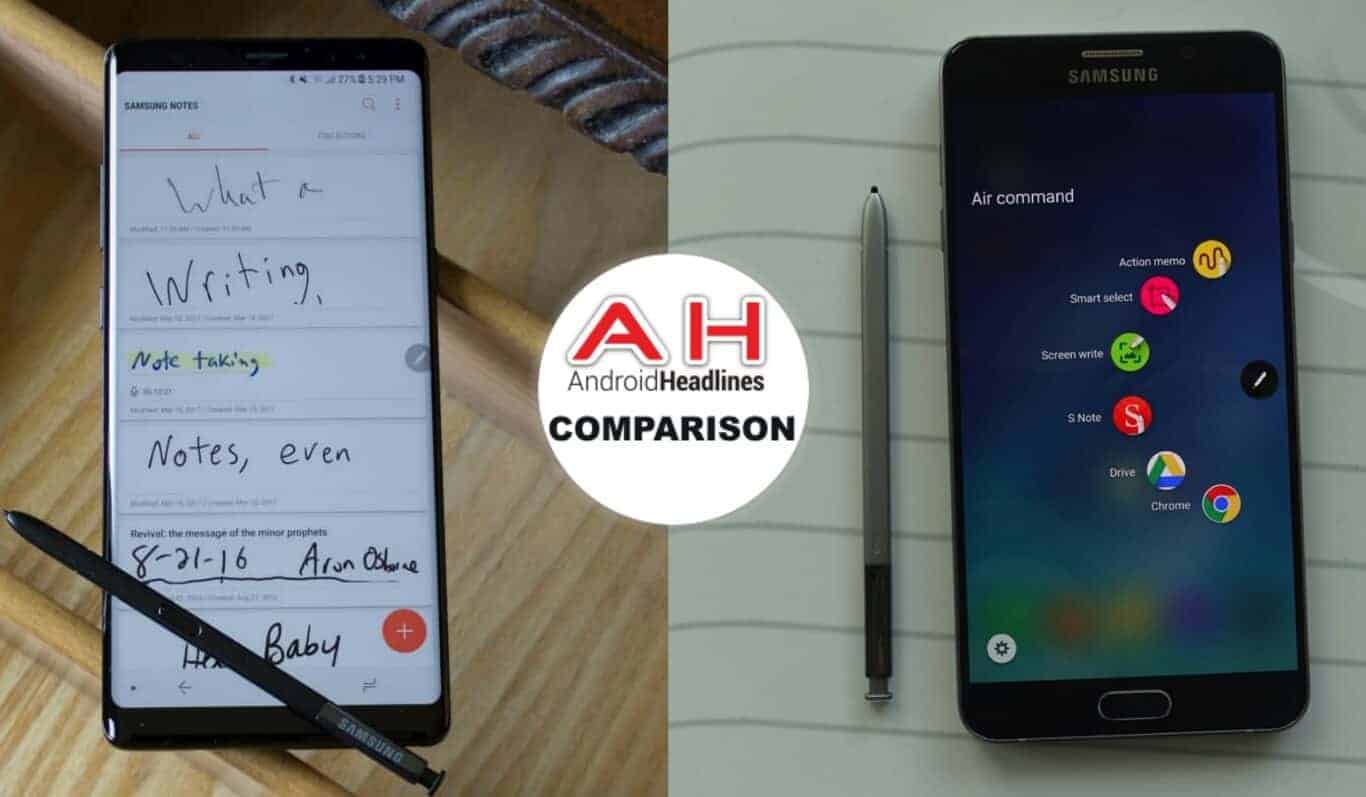 The past two years has seen many technical changes so there are many design differences between these two devices even though they are both Galaxy Notes.  The Note 5 looked more like past Samsung models, only larger, whereas the Note 8 has the new Infinity Display design with nary a bezel to worry about. Of course the processor is updated, as is the amount of RAM that jumped from the traditional 4GB to 6GB. The camera area of the Note 5 was awesome, but the Note 8 takes it to a new level with dual cameras and 2X optical zoom and it jumps the front-facing-camera (FFC) from 5MP to 8MP. The battery stays non-removable, but increases from 3,000 mAh to 3,300 mAh. Both have Hi-Res audio with Note 5 using 24bit and the Note 8 bumping it up to 32bit. Both have advanced charging capabilities and both include a 3.5mm headphone jack so no special dongle is required.

Please take a thoughtful look at the detailed Specifications Comparison chart below and here you will see just how these two great devices stack up against one another. After that, we will look at each device in greater depth and point out some of its pros and cons. From all of this information, we will try to determine the winner based on specs and execution of design and functions. 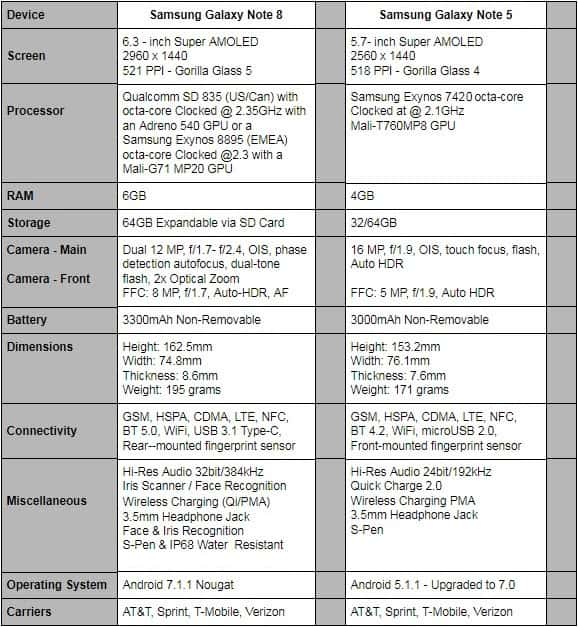 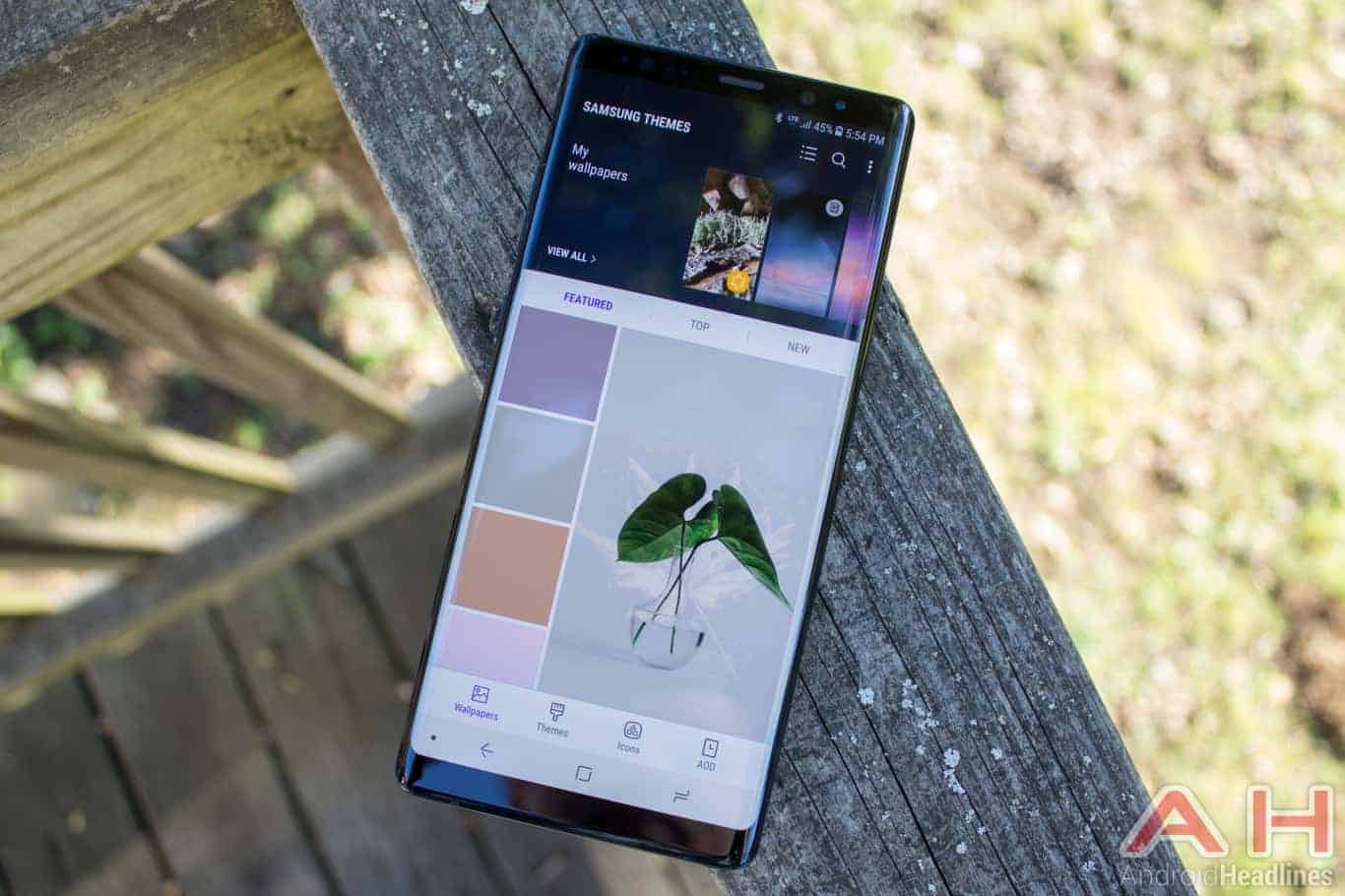 Samsung made some major design changes that started with its Galaxy S8 (S8 Plus) models. The Galaxy Note 8 shares the new Infinity Display – an 18.5:9 ratio, dual curved display that curves around and seamlessly blends into the back, eliminating any side-bezels. Samsung also eliminated the home button as the Note 8 uses onscreen buttons. The top and bottom bezels are very small on this large display while Samsung finally opted to include a dual rear camera setup on the Note 8. The fingerprint scanner is still in an awkward position on the back next to the camera, but thankfully, at least when there is light, you can unlock the phone rather quickly with the iris scanner. If all else fails, one can always fall back on using a pin for unlocking the Note 8. As usual, Samsung made improvements to the S-Pen and software to make it easier to use and more productive. The Galaxy Note 8 is arguably the best looking and most feature laden smartphone on the market, however, all of this technology comes at a cost of approximately $960.

Samsung went with a much larger 6.3-inch Infinity Display with a new 18.5:9 aspect ratio. Samsung still uses its Super AMOLED technology and the QHD+ display resolution of 2960 x 1440 pixels generates 521 pixels-per-inch (PPI), although the Note 8 has its default set at FHD (2220 x 1080) to save battery life. Samsung uses its 'always-on' display to help save battery life and to make it easier and quicker to check notifications. Just like the Galaxy S8, the Galaxy Note 8 uses the new Qualcomm Snapdragon 835 octa-core processor or Samsung's excellent Exynos 8895 octa-core, both with the new 10nm technology. The US/China model uses the SD 835 clocked at 2.35 GHz with an Adreno 540 GPU for graphics, while other EMEA countries will see the Exynos 8895 clocked at 2.3 GHz and the Mali-G71 MP20 GPU for graphics. The Galaxy Note 8 packs 6GB of DDR4 RAM and has 64GB memory that is expandable via a microSD card.

Samsung made the long awaited move to a dual camera system on the Galaxy Note 8 using dual 12MP sensors. The main camera has a large aperture of f/1.7 for low light conditions, PDAF, a dual-tone LED flash, auto HDR, OIS, and 2X Optical Zoom. The secondary camera carries all of the same attributes except it opts for a smaller, f/2.4 aperture. This secondary camera allows the user to create photos with a bokeh effect where you select the object you want to focus on and then blur the background. Samsung uses an 8MP FFC along with an f/1.7 aperture, auto-HDR, and autofocus. Samsung increased the non-removable battery size from 3,000 mAh to 3,300 mAh – although rather small for such a large and powerful device – you should easily make it through the day. The Note 8 features Adaptive Fast Charging and Quick Wireless Charging for both Qi and PMA format.

Samsung kept a few of the new features of the Galaxy S8 – the Samsung Connect feature that allows you to control Samsung's appliances and other home controls and added their own personal assistant called Bixby. Like other personal assistants, you can ask Bixby simple questions and receive an answer, although it also offers more advanced features such as the ability to get information from a picture via the camera; a DeX Station that will interface the Galaxy Note 8 with a monitor, keyboard, and mouse to give you a near-desktop experience. The Galaxy Note 8 keeps its popular heart rate monitor and oxygen saturation sensor, while another nice feature on the Galaxy Note 8 is the ability to access not only Android Pay, but also Samsung Pay. The Galaxy Note 8 series is IP68-certified against dust and water resistance. It arrived with Android 7.1.1 (Nougat), measures 162.5 x 74.8 x 8.6 mm, weighs in at 195 grams, and is available in Midnight Black, Orchid Grey, Maple Gold, or Deep Sea Blue depending where you are located. The Galaxy Note 8 will cost about $960 outright and is available for purchase from just about everywhere. 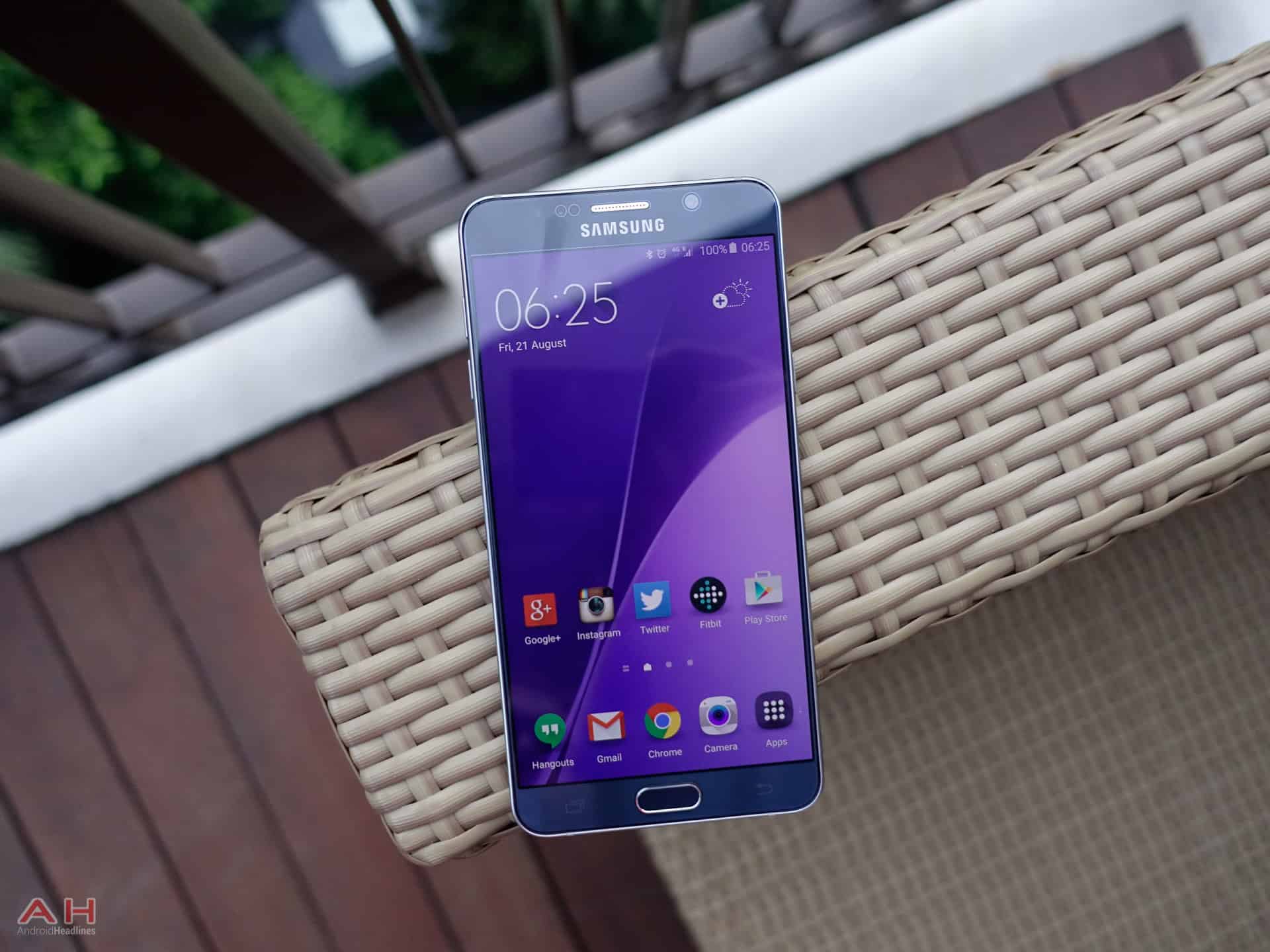 The Samsung Galaxy Note 5 continued the Galaxy S6 design as the device went from plastic, replacing it with glass and a metal frame. However, in doing so, Samsung took away both memory expansion and the removable battery. While the Note 5 is a more premium looking device compared to the Note 4, it is less functional and accommodating. So how does it hold up to the updated Galaxy Note 8?

The Galaxy Note 5 sports a 5.7-inch display with Samsung's usual tweaking to make it better than the year before. It has a QHD Super AMOLED display with a resolution of 2560 x 1440 pixels, a 518 PPI, and was one of the best displays on the market. All models of the Note 5 use Samsung's 64-bit Exynos 7420 octa-core processor with four cores clocked at 1.5 GHz and the other four cores clocked at 2.1 GHz with the then newest 14nm technology. The Note 5 packs 4GB of DDR4 RAM and when it comes to internal storage, the Note 5 offers either a 32GB or 64GB option of much faster UFS 2.0 Flash memory. The Note 5 offers no room for expansion.

The highly rated camera on the Galaxy Note 5 has a 16MP sensor with a fast startup, quick focus, a large aperture of f/1.9 for better low-light photos, Live HDR, and great software. The Note 5 uses a 5MP FFC with the f/1.9 aperture and wide-angle and Live HDR for selfies and video chats. The Note 5 has a non-removable 3,000 mAh battery with a Quick Charge 2.0 as well as quick wireless charging capabilities.

The Note 5 has Samsung's yearly improvements with the S-Pen by giving it more sensitivity and added features to give it even more functionality. The Note 5 had improvements to its document area, allowing it to handle longer documents. You could also send live broadcasts of your videos. Out of the box, it was running Android 5.1.1 (Lollipop), but has since received its Android Nougat upgrade. It was priced at $700 outright for a 32GB model and $790 for a 64GB model, although it is much cheaper now. 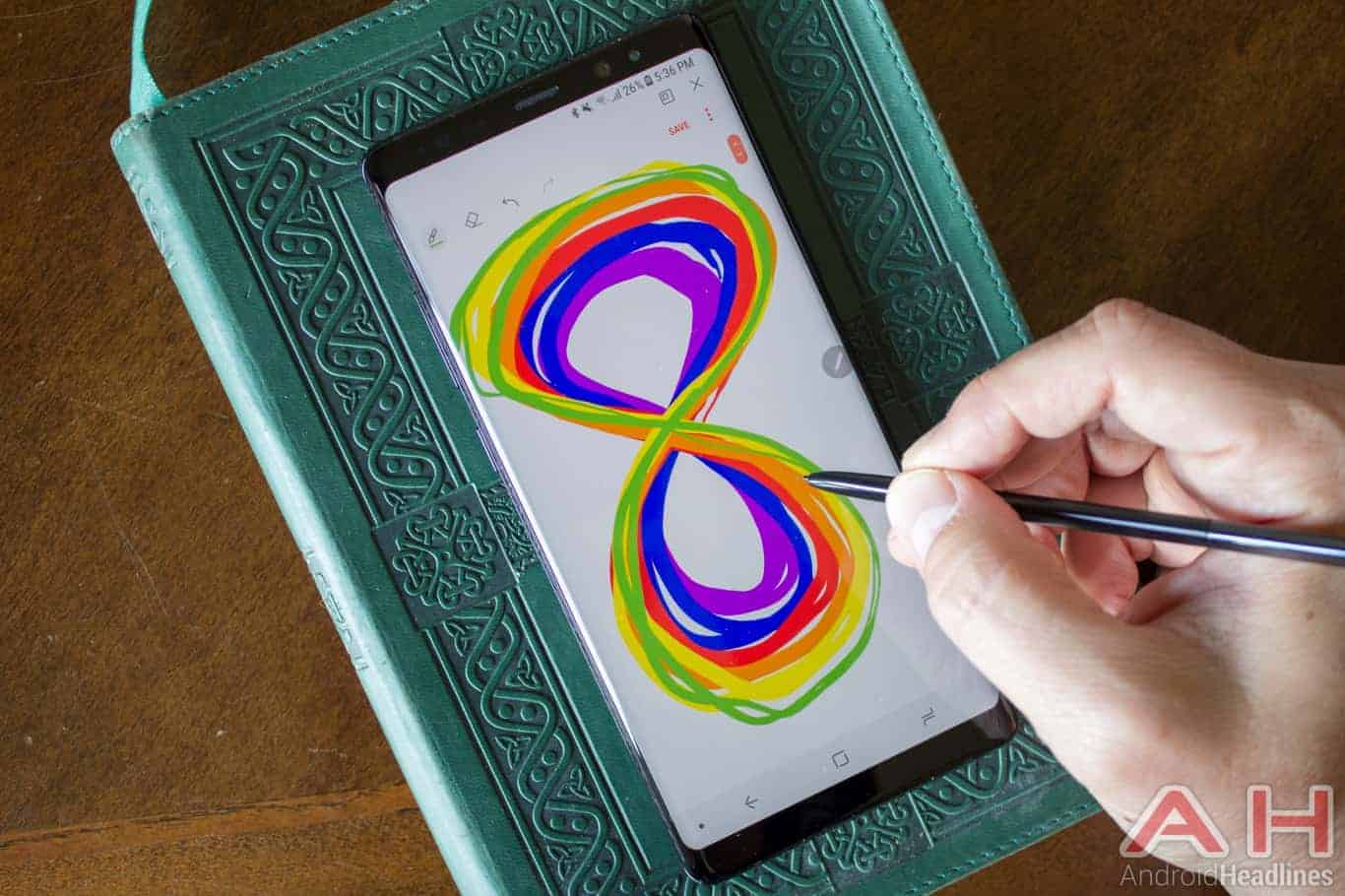 There is no doubt that the Galaxy Note 8 is a superior and more technically advanced device compared to the Galaxy Note 5 – after all, it is two years newer. But with that technology and extra features comes a price tag of close to $1,000! Only you can decide if the added features are worth paying those extra bucks for.

The Note 8 has a larger display, faster processor, more RAM, expandable memory, improved S-Pen, a People and Apps Edge on the display, a more feature laden dual camera, a larger battery, IP68 rating, and a more appealing design. While the fingerprint scanner is in an awkward area, the Note 8 incorporates Face and Iris recognition system that works fast – as long there is light – otherwise you have to enter a pin.

Over the years, the Galaxy Note 5 has proven itself a solid device. If you are okay with a smaller display (by comparison), a less powerful processor, and a few less features, then the Galaxy Note 5 is a great choice as you will save yourself a pocketful of money by picking the Galaxy Note 5. This begs the question of whether the Note 8 is worth the upgrade if you already own a Note 5? This is a decision that only you can make – is the Note 8 a more advanced device; it certainly is, however, it will cost you for the privilege of ownership.

Buy Galaxy Note 8 Buy Galaxy Note 5
Trusted By Millions
Independent, Expert Android News You Can Trust, Since 2010
Publishing More Android Than Anyone Else
35
Today
153
This Week
153
This Month
3319
This Year
104796
All Time
Advertisement