Do we have an interesting comparison for you today – the new LG V30 takes on the LG G6. The LG G6 is the mainstay of the LG smartphones and competes directly with the likes of the Samsung Galaxy S8 series. LG decided they needed a smartphone designed for the photo and audio enthusiasts when they released the first LG V10, however, the lines between the V30 and G6 are becoming a little faded. The design of the LG V30 is certainly more up-to-date and steals some of its looks from the Galaxy S8 with its almost edge-to-edge display, but the LG V30 does not have the curved edges like the Galaxy S8. The V30, even with its larger display – 6-inch vs 5.7-inch – is lighter than the LG G6. Is the LG V30 worth the extra money? If you already have an LG G6, is it worth upgrading? These questions and more are what we hope to answer during this comparison. Before we look at each individual device, let’s take a look at what they have in common.

The LG V30 and its older sibling, the LG G6, have a few things in common. Although both devices use a different size display and technology, the both use a Quad HD resolution and an 18:9 aspect ratio. The processor/GPU used in both devices are Snapdragons and Adrenos, but different models. Both have 4GB of DDR4 RAM and both offers an expandable 64GB configuration – 32GB is standard in the LG G6. They both pack a 3,300 mAh non-removable battery, Quick Charge 3.0, and Wireless charging. Even the physical dimensions are very close with the LG V30 weighing in at 5 grams less than the LG G6. Both have Hi-Res Audio – 32-bit/192kHz – IP68 water and dust resistance, MIL-STD-810G specs, and a 3.5mm headphone jack. The LG V30 and LG G6 are both running Android Nougat – 7.1.2 for the V30 and 7.0 on the G6 – and both will work on all US carriers. 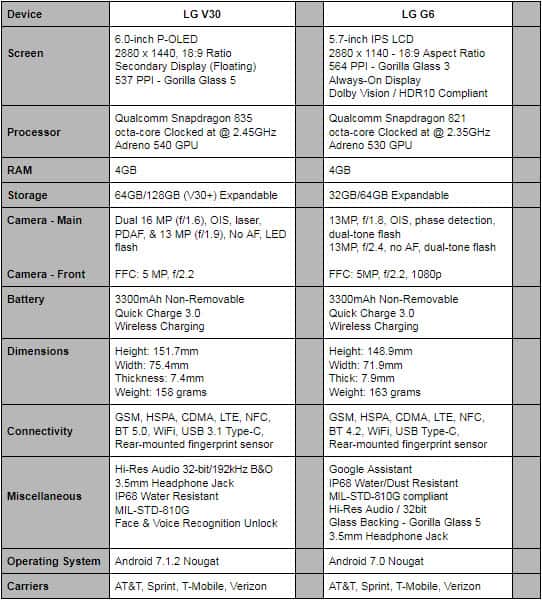 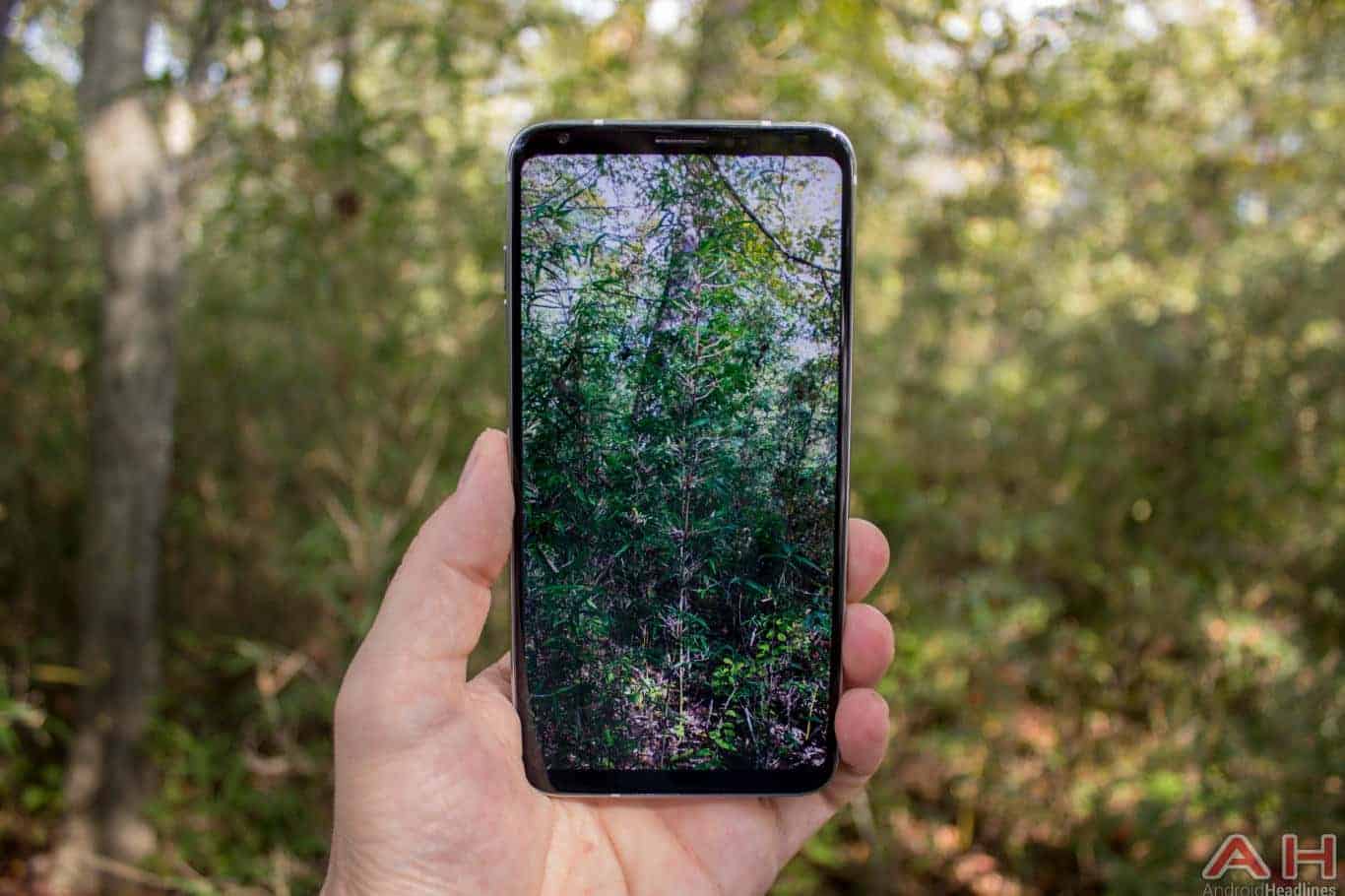 LG tries to be a very innovative company as it competes with another powerful South Korean company, Samsung. One only has to look at the LG G5’s modular design, their jump to dual cameras, and four DACs. When the company set its sights on the new LG V30, it was not afraid to change things up from the LG V20. LG used an all-metal design on the LG V10 and on the V20 – only switching from stainless steel to aluminum. The new V30 uses an all glass body, switched to a non-removable battery, but it gains both an IP68 certificate and wireless charging. LG also broke its tradition of using the LCD display technology and jumped on the OLED bandwagon. The LG V30’s display also parted ways with the 16:9 aspect ratio of the V20 and followed the growing trend to the 18:9 ratio. By making this change, it allows the V30 to have a larger display than the V20, but a smaller footprint. LG included the Snapdragon 835 and retained the Hi-Res audio circuitry that works great with a pair of headphones. LG really commits a crime by only including a single speaker.

LG has dabbled with using an OLED display on their limited flexible G Flex device – another innovative idea – but this is the first time on a flagship device. The LG V30 sports a 6-inch QHD OLED display with a resolution of 2880 x 1440 that results in 538 pixels-per-inch (PPI). As competition for Samsung’s ‘Infinity Display’, LG named their new display ‘FullVision’ that includes Dolby Vision and HDR 10 support, and the new 18:9 ratio. This allows LG to give the user a larger display with a smaller footprint and it forms two squares for a better multiple screen experience. Rather than use the fixed secondary display at the top of the main display like the LG V20, the LG V30 uses a ‘floating bar’ that can be moved or swept out of the way. The LG V30 packs a Snapdragon 835 processor clocked at 2.45 GHz that adds speed, more capabilities, and better battery life. It is paired with an Adreno 540 GPU for stunning graphics. The V30 retains the standard flagship RAM of 4GB and 64GB of expandable memory.

LG started their dual camera craze on the LG V10, continued it on the V20 and keeps it on the LG V30, but they included some improvements. The primary camera sports a 16MP sensor, OIS, laser and PDAF for focusing, dual-tone LED flash, and a large f/1.6 aperture to help capture those lowlight shots. The secondary camera, used for your wide-angle photos, does not have all of the features of the primary camera but uses a 13MP sensor with a wide-angle 120-degree field and a slightly smaller aperture of f/1.9. The front-facing camera (FFC) is the same 5MP used on the LG V20, but adds facial recognition to go along with selfies and video chats. A 3,300 mAh non-removable battery that offers Quick Charge 3.0, as well as wireless charging powers the device. LG join most other manufacturers and did away with their removable battery, but on the upside, you are getting IP68 water-resistance and wireless charging.

The LG V30 follows the LG V20 with its four DAC (Digital-to-Analog Converters), the EQ with left/right balance controls and B&O Play certifications. Even after switching from metal to a glass back on the V30, it retains its MIL-STD-810G certification. Using a glass back forced LG to use a non-removable battery, but now offers IP68 water-resistance and wireless charging. Other improvements start with the P-OLED technology and a larger display. It gives you blacker blacks and richer colors. The camera area improves all around and now adds facial recognition to the V30’s voice recognition. The non-removable battery is slightly larger at 3,300 mAh and will easily make it through a day. The device measures 151.7 x 75.4 x 7.4 mm and weighs in at 158 grams. The V30 comes in your choice of Cloud Silver or Moroccan Blue and will come with Android 7.1.2. The LG V30 will cost you approximately $840 outright. 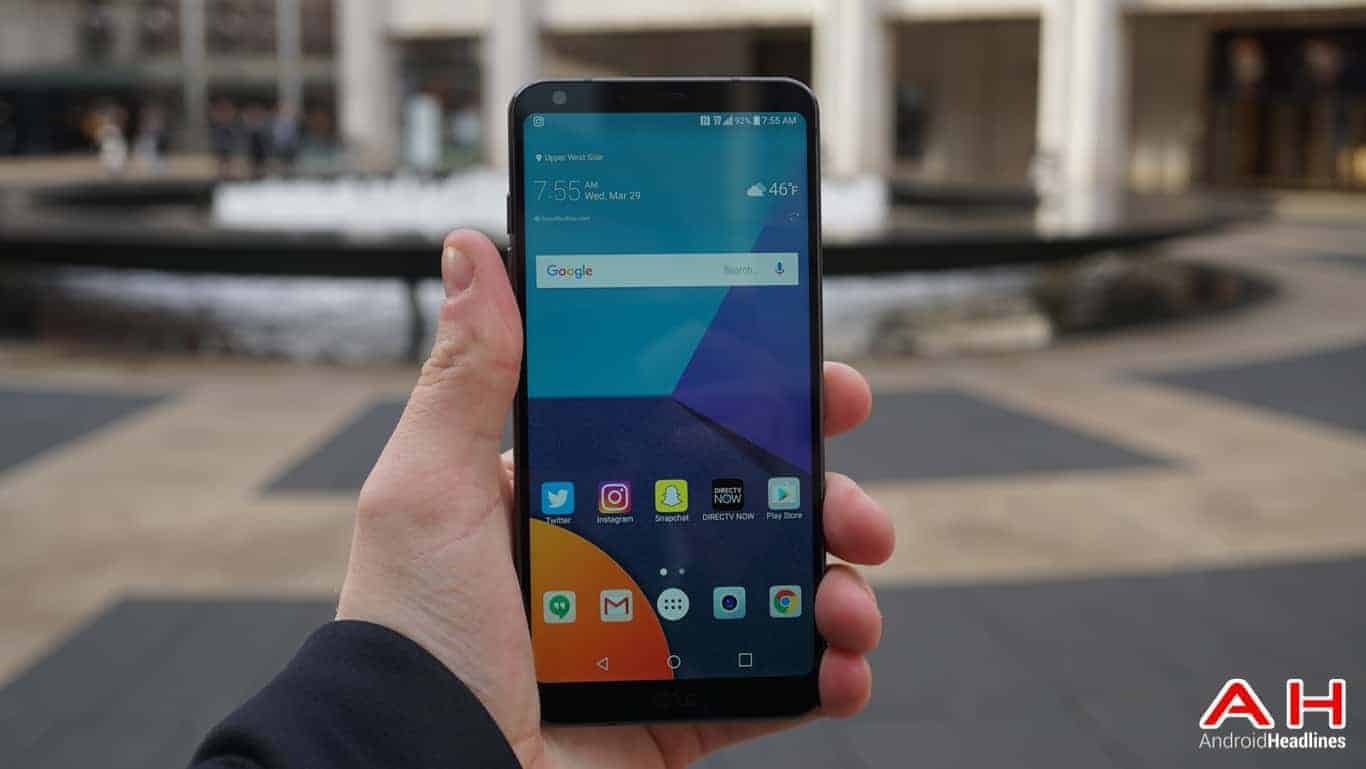 LG did a complete turnaround from the LG G5 and its modular design as it reworked the LG G6 from the ground up. The modular design seemed like a good idea at the time, but the public did not care for it and that resulted in poor sales. LG went to a new sleek, all glass design and this allowed the LG G6 to include an IP68 certification and wireless charging. However, the removable battery got lost in the shuffle, but LG helped by increasing the battery size from 2,800 mAh to 3,300 mAh. LG increased the display size from 5.3-inches to 5.7-inches and gave it an 18:9 screen ratio for a better entertainment experience and easier multitasking. LG improved the camera area and kept the fingerprint sensor on the back of the device. Let’s see just how the one LG flagship holds up to its other flagship, the LG V30.

The LG G6 sports a 5.7-inch IPS LCD QHD+ display and includes the ‘always on’ feature and a resolution of 2880 x 1440 pixels that works out to 564 PPI. The LG G6 was the first LG device to switch to an 18:9 screen ratio. The LG G6 has a slightly taller and narrower display that is Dolby Vision/HDR10 compliant. Its sizing also allows for two perfect squares that make multitasking a breeze. LG decided not to wait for the newer Snapdragon 835 and went with the 2016 Qualcomm Snapdragon 821 quad-core processor. It has dual cores clocked at 1.6GHz and another dual-core clocked at 2.35GHz. That is paired with the Adreno 530 GPU for graphics. This combination provides the user with speed and terrific graphics. The G6 packs 4GB of DDR4 RAM and 32GB/64GB of internal memory that is expandable to 2TB via a microUSB card.

Like the V30, the LG G6 comes with dual cameras that operate independently from one another. The primary camera uses a 13MP sensor with a large f/1.8 aperture, PDAF, OIS, and dual-tone LED flash. The secondary camera is a 13MP ultra wide-angle 125-degree sensor with a fixed focus and a smaller f/2.4 aperture. Most pictures you take with the LG G6 will use the primary 13MP shooter; however, if you want a wider group shot or a landscape setting, you can use the 13MP ultra wide-angle lens. LG used a 5MP FFC with an f/2.4 aperture for selfies and video chatting. LG increased the battery size from 2800mAh to a 3300mAh with Quick Charge 3.0 and now offers standard wireless charging.

LG moved their fingerprint sensor to the back of the phone many models ago – the LG G5 due to its modular design and the LG G6 due to the small bezels. The LG G6’s fingerprint sensor also acts as an on/off switch as it did on the LG G5. The LG G6 did away with its IR Blaster, but the FM radio is available in certain market areas. The LG G6 was the first non-Google smartphone to include Google Assistant built into the device. The LG G6 measures 148.9 x 71.9 x 7.9 mm, weighs in at 163 grams and comes in Mystic White, Astro Black, or Ice Platinum. The device is available on all the leading US carriers for about $670 for the 32GB model. 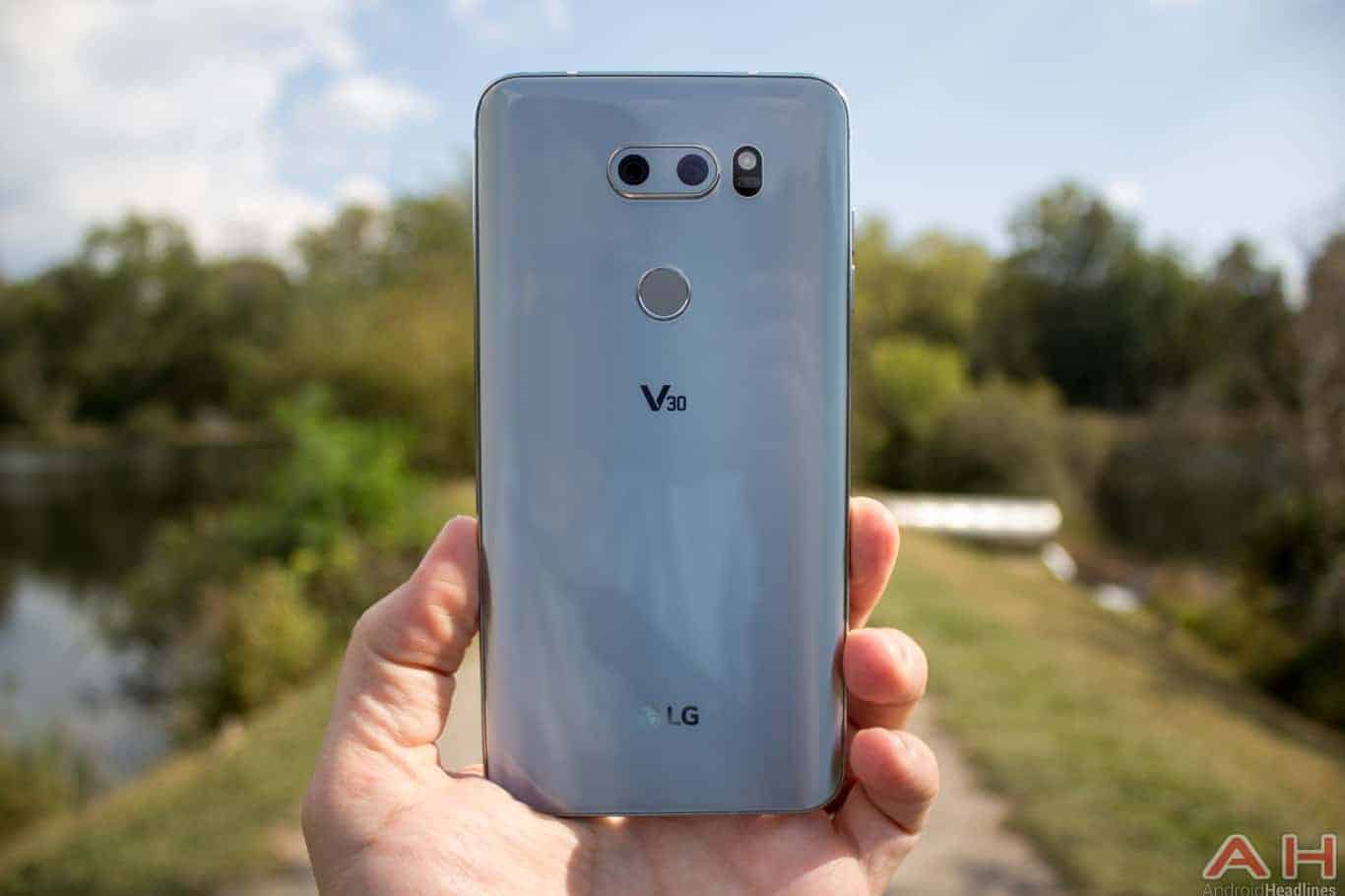 The LG V30 is the clear winner when it comes to specifications and looks – better display, faster processor/GPU, better camera area, and more base memory. However, these features come at an increase in price – $840 versus the LG G6’s reduced price of $670. Only you can decide if the upgrades are worth it to you.

The LG G6 is a solid device and was well received when it hit the market in March, but by coming out so early, LG was forced into using the Snapdragon 821 processor and Adreno 530 GPU – both solid processors, but a step down from the SD835/Adreno 540 used in the LG V30. The camera area is good with two 13MP sensors, but the LG V30’s camera is just a tad better, offering a superior experience.

If you need to save the money, the LG G6 should satisfy your smartphone needs, but if you want the most up-to-date performance and sexier looking device, go for the LG V30.