Google made a huge move last year when it put the Nexus brand to rest and started a new precedent – the Google Pixel and Pixel XL. They had new look, upgraded hardware, and a higher price tag than Nexus owners were used to paying. The Pixel 2 line continues along the same lines with improved looks and even a better camera that is top of the line in the mobile field. Google kept the glass panel at the top of the device, but it is smaller this time around. The backing on the Pixel 2 XL has a nice “grippy” material – that, coupled with the new 18:9 display ratio, make holding the device much easier. The Pixel 2 XL adds stereo speakers to the small top and bottom bezels but takes away the 3.5mm headphone jack. The Pixel 2 XL also takes full advantage of Android 8.0 Oreo and this adds to the difference between the two devices. The Nexus/Pixel line has often been criticized as being ‘no frills,’ however, the Pixel 2 lineup starts to add the larger 18:9 display ratio, their new Active Edge, and Google Lens. Of course, pricing is now set at $849 for the 64GB model and $949 for the 128GB model – this is ‘Samsung style’ pricing – luckily, if you are on Verizon, you can purchase a Pixel 2 smartphone on their 24-month payment plan.

Despite being a year apart in design and build, the Pixel 2 XL and the original Pixel XL do have a few things in common. Both use the OLED technology and QHD resolution on their displays, and both have almost the same pixel-per-inch (PPI) count even though the Pixel 2 XL is one-half inch larger. Both devices use the Snapdragon processor and Adreno GPU du jour. You will find 4GB of DDR4 RAM in both devices and non-expandable memory. The camera area is almost identical, although a few improvements were made in the Pixel 2 XL. The non-removable batteries offer a fast charge option, you will find Bluetooth (5.0 in the Pixel 2 and 4.2 in the Pixel), an USB Type-C port, and a rear-mounted fingerprint sensor. Both offer water and dust resistance and Google Assistant built into the phone. The phones are nearly identical in physical size and both are running Android 8.0 Oreo. The Pixel models come unlocked to work on all US networks, however, Verizon is the exclusive carrier. 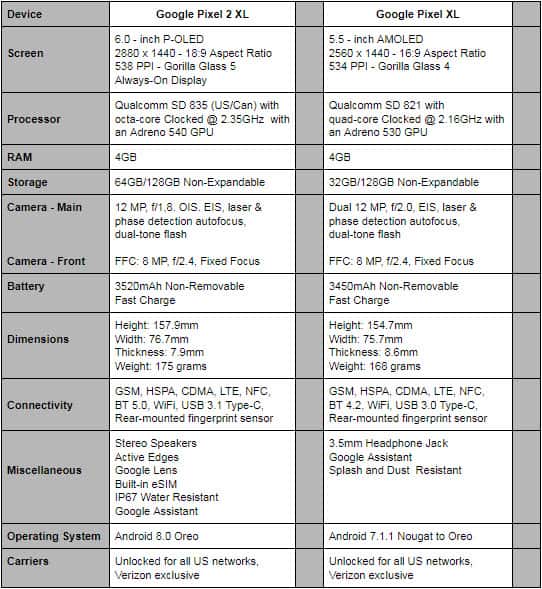 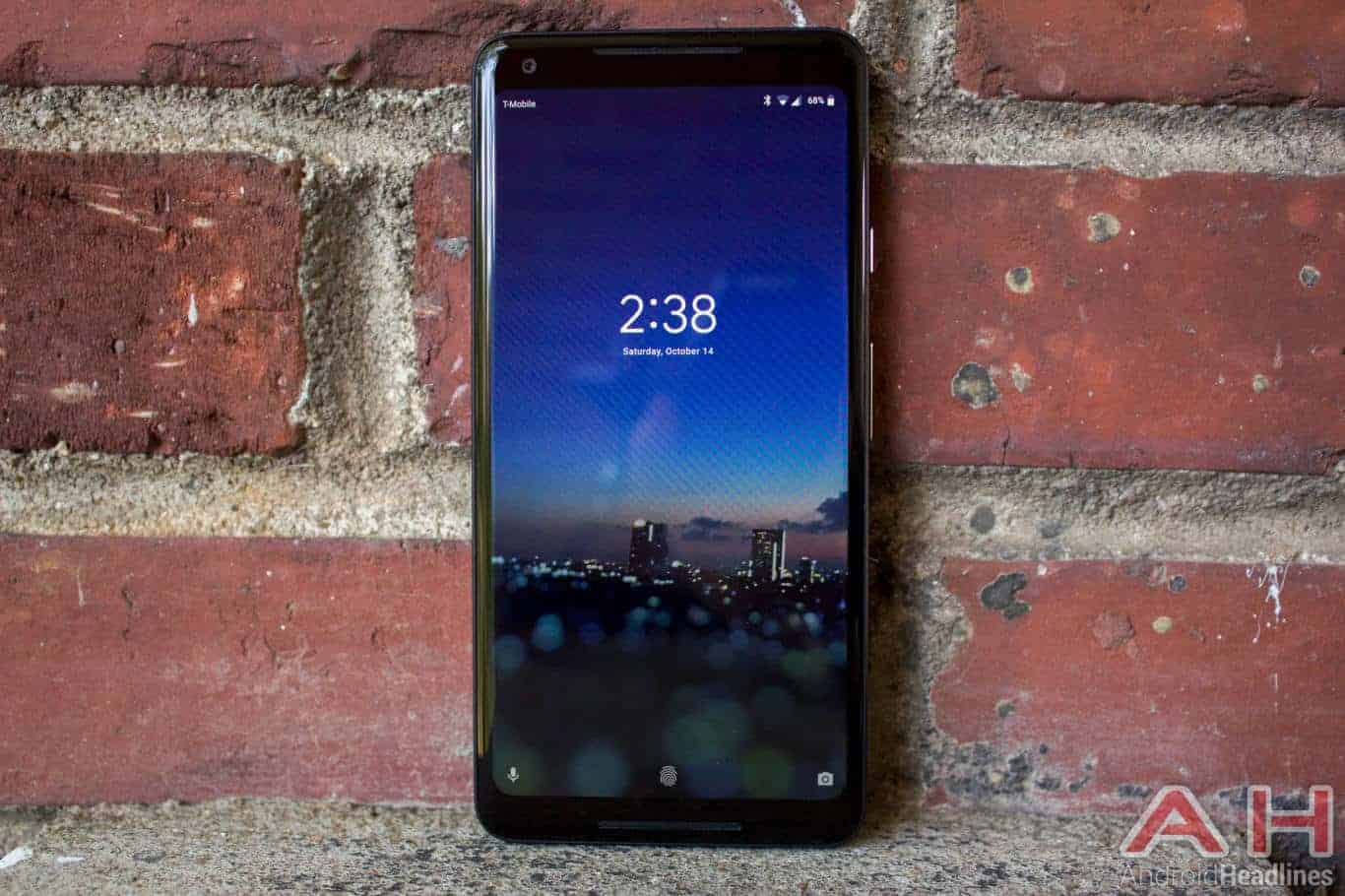 The Google Pixel 2 lineup made improvements over the original model in almost every department. In this comparison, we are looking at the Pixel 2 XL model, which Google designed as a ‘bezel-less’ device. We throw that term around, but it is not really ‘bezel-less.’ It does have very small bezels on the left and right, and the top and bottom ones are much smaller than the Pixel 2 – giving it a more modern look. The Pixel 2 XL now uses a P-OLED display with an 18:9 aspect ratio. The device takes advantage of Android 8.0 and incorporates an Active Edge that lets the user launch Google Assistant without a voice command or silence an incoming phone call. Google Lens is another feature that can identify details about photos – what kind of flower, movie details from a poster, etc. Pricing must also be taken into account – with 128GB of non-expandable memory, you are looking at $949 and with the standard 64GB, it will still cost $849. Verizon is once again the exclusive dealer of the Pixel 2 phones although you can still buy them unlocked to work on any US carrier.

For the Google Pixel 2 XL, the display increased to a 6-inch P-OLED QHD+ display with a resolution of 2880 x 1440 pixels and 538 PPI. Google followed the other top phones by giving it an 18:9 aspect ratio and uses the Always-On display feature for notifications. By not having to turn-on the main display, the Always-On feature saves battery life. The new Pixel 2 models use the newest Qualcomm Snapdragon 835 octa-core processor clocked at 2.35 and an Adreno 540 GPU for the graphic demands. The Pixel 2 XL has no expandable memory but there are two variations – one packs 64GB and another packs 128GB. Both models use 4GB of DDR4 RAM.

The original Google Pixel line had the number one rated camera, and we are glad to report that the Pixel 2 models have added improvements, including the camera software. The Pixels use a single camera with 12-megapixel sensor, an aperture of f/1.8, include both EIS and OIS, laser and PDAF, and a dual-tone flash. The FFC is an 8-megapixel with fixed focus and an f/2.4 aperture. Google supplied their top Pixel 2 XL with a large 3,520 mAh battery that will certainly last you throughout the day. When you do need to charge the battery, fast charging is available.

The Google Pixel 2 XL did well in our review and Google designed it to compete nicely with other flagships – its biggest drawbacks are pricing, the lack of expandable memory, and no 3.5mm headphone jack. Another consideration is availability – Google is known for running out of stock of certain colors or configurations. It has a great camera area that is the best on the market and then adds to that Camera Lens, Active Edge features, and Google Assistant. While it does not have Hi-Res Audio, it does have stereo speakers on the front but no 3.5mm headphone jack. Google finally added water resistance this year, but only IP67, not the IP68 that other flagships are using. Of course, the Pixel 2 XL is running Android 8.0 (Oreo) out-of-the-box and will receive the fastest Android updates. The Pixel 2 XL measures 157.9 x 76.7 x 7.9 mm, and weighs in at 175 grams. It is available in two colors – Just Black and Black & White. The Pixel 2 XL will cost about $849 with 64GB of RAM and $949 with 128GB of RAM and is available at the Google Store, Best Buy and as an exclusive through Verizon.

The Google Pixel XL caused quite a stir with longtime Nexus lovers when they dropped the Nexus name the year before in favor of the new Pixel moniker. Google is trying to establish their own ecosystem so that customers will purchase more Google products. The two original Pixel models are very similar with the exception of the screen size, display resolution, and the battery size. We will be looking at the Google Pixel XL because its 5.5-inch display with the QHD resolution is better suited to go against the Pixel 2 XL. Let’s see how Google’s Pixel XL (made by HTC) with its polished glass and metal construction holds up to the newly designed Pixel 2 XL (made by LG).

The Google Pixel XL sports a 5.5-inch AMOLED display with a Quad HD resolution of 2560 x 1440 pixels and 531 PPI. The brain is the Qualcomm 821 quad-core processor with a dual-core clocked at 1.6GHZ and a dual-core clocked at 2.15GHz. This is really the SD820 that packs an extra 10-percent faster performance according to Qualcomm. It packs 4GB of DDR4 RAM and 32GB or 128GB of fast UFS 2.0 non-expandable memory. It uses a large 3,450 mAh non-removable battery for power and has rapid charge capabilities.

The camera specifications, on paper, are not that impressive sounding – a 12.3-megapixel sensor for their main camera along with an aperture of f/2.0, laser and phase detection autofocus (PDAF,) and a dual-tone LED flash. The large 8-megapixel FFC is a nice size and comes with an f/2.0 aperture, a 1.4µm pixel size, 1080p, and offers excellent selfies and video chatting. However, even with these pedestrian specs, the Pixel camera, tested by DxOMark, received a score of 89 – the highest yet for a smartphone.

There is a fingerprint sensor on the back of the device that will allow you to unlock your device or authorize mobile payments, including Android Pay. With the fingerprint sensor on the back, it is surprising that Google used such large bezels on the front of the device – this is corrected on the Pixel 2 XL. The Pixel series are the first smartphones to have Google Assistant built into the device. The Pixel XL measures in at 154.7 x 75.7 x 8.6mm and weighs in at 168 grams. It comes in Quite Black, Very Silver, and Really Blue (as a limited edition.) It runs Android 7.1 Nougat out of the box, but has since been upgraded to Android 8.0 Oreo. The 32GB Google Pixel XL is IP53 rated for splash resistance and will cost you about $670 as the price is reduced since the Pixel 2’s are out. 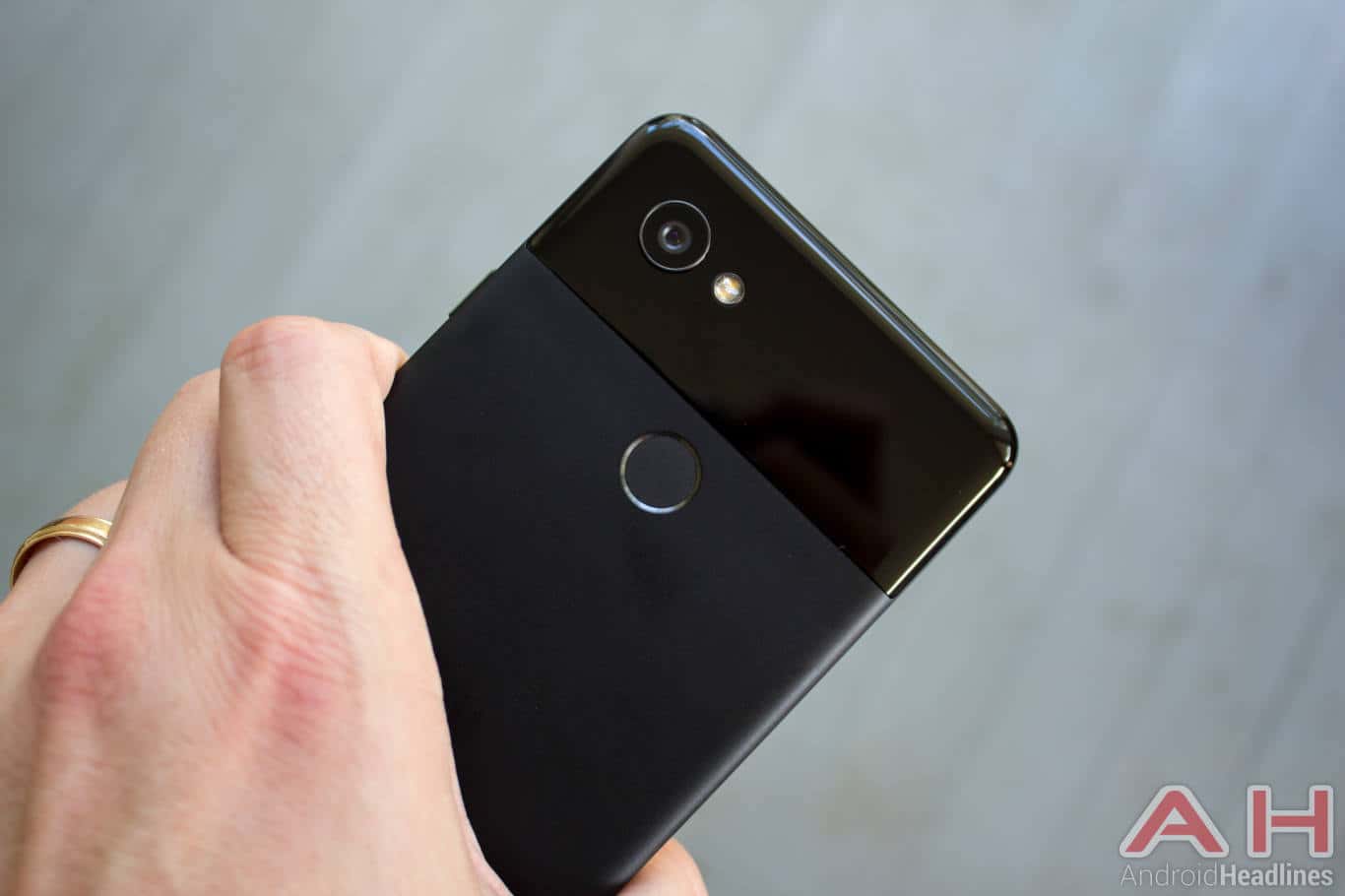 Taking into account that there is about a $180 difference between these two devices, we have to pick the Google Pixel 2 XL as the winner of this competition. It is nicer looking, easier to grip, has a larger display, better technical specs, improved camera, Active Edge, and Camera Lens. The Pixel 2 XL is the best that Google has and it could go up against any modern smartphone.

The original Pixel XL is a fine device, but even at its reduced price of $670, it still seems a bit expensive. The device has no IP68 certification, no Always-On display, no Hi-Res Audio, no memory expansion, and large bezels. It does run pure vanilla Android, will receive the fastest updates, has a great camera, and will save you some money. If you are willing to live without the Pixel 2 XL upgrades, then the Pixel XL might be for you.