OUKITEL recently announced a new smartphone it has on the way, the OUKITEL K5000. In many ways, this is a smartphone that resembles the Galaxy S8 from Samsung. Making it a device that is in some respects comparable to Samsung’s Galaxy S8. However, this is a device that is designed to be much more affordable than the Galaxy S8 offering consumers some of the same features, but at a lower price. Now, OUKITEL has detailed some of the similarities and differences between its OUKITEL K5000 and the Galaxy S8 for those that are in the market for a new smartphone.

What is clear is that both of these phones place a good deal of focus on their respective displays and in no small part due to both smartphones adopting the now-common 18:9 aspect ratio, which results in more screen real estate while also adopting a thinner, yet taller, display. As for the size and resolution differences, the OUKITEL K5000 features a 5.7-inch display along with a HD+ resolution which the Galaxy S8 features a 5.8-inch display with a Quad HD+ resolution. Adding to their similarities is that both devices come with a curved design on both the front and back of the devices.

Inside however, is where some of the main differences can be seen. For example, while both smartphones offer 4GB RAM and 64GB storage, the expandable storage on offer with the K5000 is resigned to 128GB compared to the 256GB on offer with the Galaxy S8. Likewise, the K5000 is a device that comes powered by a MediaTek 6750T octa-core processor, compared to the Qualcomm Snapdragon 835 octa-core SoC found in the Galaxy S8.

When it comes to the cameras, the Galaxy S8 is a device that features a 12-megapixel rear camera along with an 8-megapixel front facing camera. In contrast, the K5000 comes loaded with a 13-megapixel (interpolated to 16MP) rear camera along with a 16-megapixel (interpolated to 21MP) front-facing camera. Likewise, when it comes to the battery life the Galaxy S8 is powered by a 3,000 mAh battery while the OUKITEL K5000 packs in a 5,000 mAh battery.

So to sum up, when it comes to the core numbers, the Galaxy S8 is a smartphone that comes with a slightly larger display, a greater resolution and is powered by a more powerful processor. While the OUKITEL K5000 manages to include a greater battery capacity and higher MP counts for its front and back cameras. Not forgetting of course, the latter is also one that is priced considerably less. An overview of the specs of both devices can be seen below, as well as the option to find out more about the OUKITEL K5000 through the link. 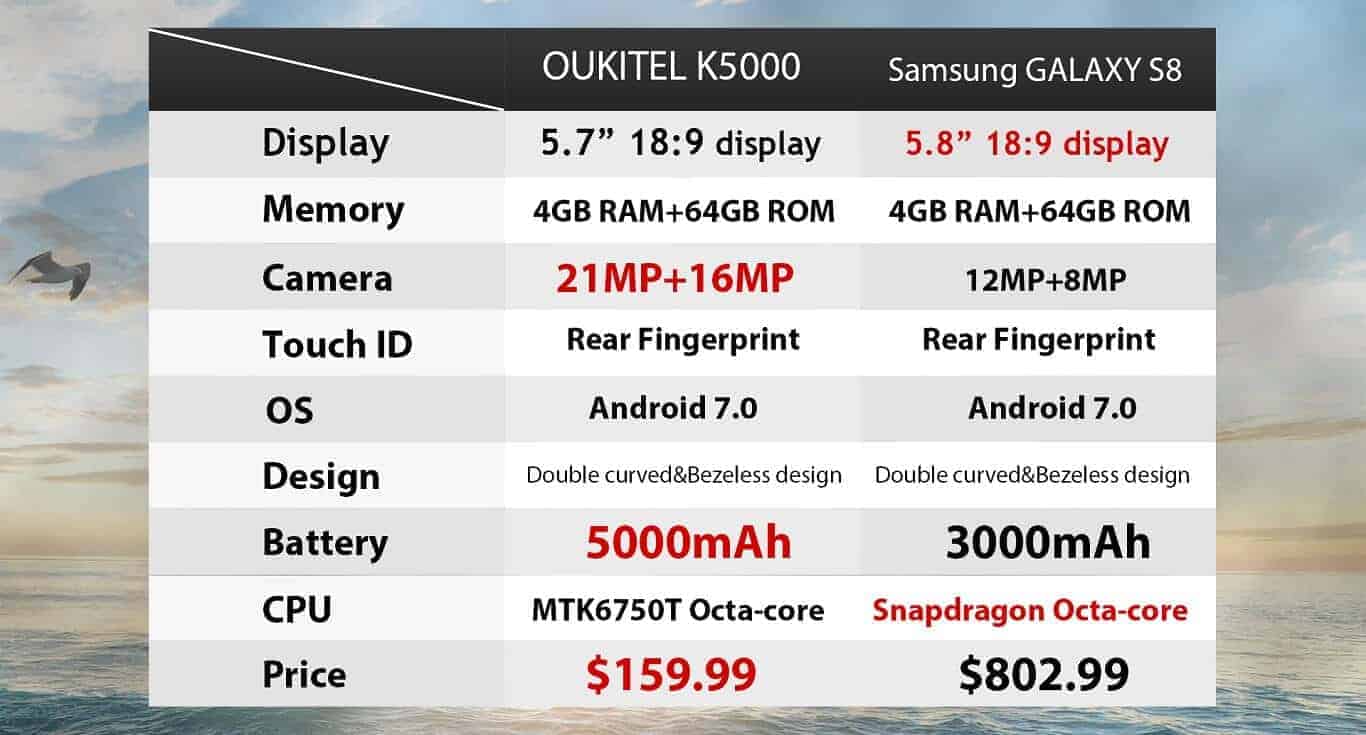