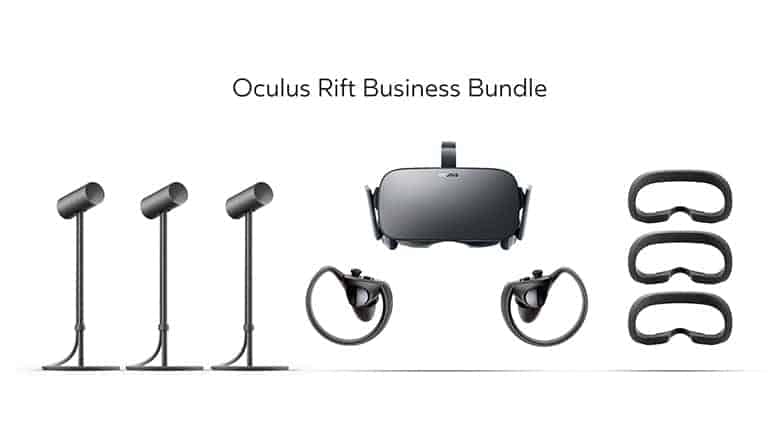 Earlier today Oculus announced that it was permanently dropping the price of its Oculus Rift touch bundle to $399, down from its official $499 price. Along with that announcement, the company also explained that it is now making available an ‘enterprise edition’ of the Oculus Rift VR headset aimed squarely at businesses. As this is more of an enterprise solution, it is one which comes with a number of additional benefits compared to the consumer version, although by the same token it also comes with a higher price tag attached, with Oculus conforming the ‘Oculus for Business‘ model is priced at $900 per bundle.

As for the bundle itself, and in addition to the actual Oculus Rift, the enterprise version does come with touch controllers, three room sensors, a remote, and three Rift Fits – facial interfaces designed to work with Rift. Although where the added-value for businesses really comes from is that these bundles also come with a commercial warranty, a commercial licence, and what the company refers to as “preferential customer service.” According to the announcement, Oculus for Business is something that can benefit a wide range of businesses, and irrespective of the size of a business, as Oculus will sell these bundles on a per unit basis, as well as in bulk for those who want a much wider VR integration solution for a wider network of locations. To provide some examples, Oculus confirmed the likes of Audi, DHL, and Cisco are already making use of Oculus Rift to promote their products and services, as well as provide a new way in which customers can engage with the companies in general.

For those in the market for such a solution, the company is now selling these enterprise options directly through its website, while also advising that units can be shipped to the US and Canada, as well as a number of European countries, including the UK, France, Germany, Spain, and more. Full details on the new enterprise version of Rift available through the link below. Also below, is a newly released video further highlighting Audi’s use of Oculus for Business by allowing customers to customize and get a better feel of “their dream car.”