Nubia’s Thursday product event was focused on two smartphone models – the Nubia Z17S flagship and the more affordable Nubia Z17 miniS. As the moniker suggests, the latter is part of the same smartphone series and shares some design characteristics with its larger sibling while being offered in a smaller body. It carries a more modest system-on-chip and is priced accordingly but follows the larger model in the sense that the Nubia Z17 miniS also employs a total of four camera modules split into two pairs for its front and back panels. The smartphone follows the same availability pattern as its counterpart and as a result, prospective buyers in China can now pre-order the device and look forward to an October 19th shipping date.

The Nubia Z17 miniS features a 5.2-inch 2.5D display with a more conventional aspect ratio of 1,920 by 1,080 pixels and promising 450 nits of brightness, as well the ability to cover 85 percent of the NTSC color gamut. Under its hood resides the Qualcomm Snapdragon 653 system-on-chip sporting four ARM Cortex-A72 high-performance cores clocked at 1.95GHz, and four ARM Cortex-A53 low-energy cores operating at a frequency of 1.44GHz. The CPU is paired with the Adreno 510 graphics chip and 6GB of RAM, and the device offers 64GB of internal memory. In the camera department, the back panel of the Nubia Z17 miniS accommodates a 13-megapixel RGB sensor coupled with a 13-megapixel monochrome shooter, and the package takes advantage of optical image stabilization as well as 4K video recording capabilities, with both modules having an aperture of f/2.2. Meanwhile, the front panel of the device features a 16-megapixel unit with an f/2.0 aperture and 80-degree lens, as well as a secondary 5-megapixel sensor with an f/2.2 aperture.

The Nubia Z17 miniS relies on a 3,200mAh battery and runs Nubia UI 5.0 based on Android 7.1 Nougat. Other product details include a rear-mounted fingerprint sensor, 4G VoLTE, Bluetooth 4.1, and Wi-Fi 802.11ac connectivity, as well as a USB Type-C connector. The device doesn’t have a 3.5mm headphone jack and is available in Black Gold and Deep Blue color options for the price of 1,999 Yuan ($303), while the third color variant called Aegean Blue is priced at 2,099 Yuan or the equivalent of $318. 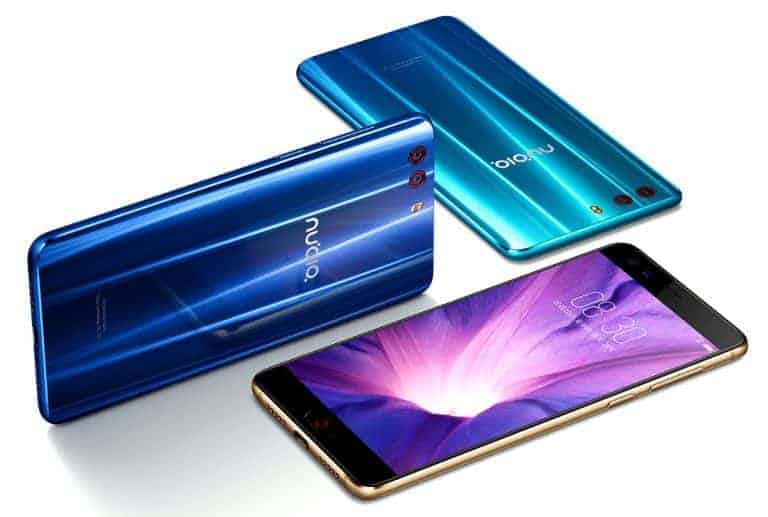