According to a Samsung patent application published in late September by the USPTO, the South Korean tech giant has developed a gesture-based input method for notebook computers which might be implemented in its future products. The patent application reveals a notebook touchpad that can detect both touch and non-touch inputs from the user, and briefly explains how this is achieved through a multi-layer panel.

Samsung’s touchpad concept includes an upper and lower electrode, as well as two touch controllers. The first controller can detect touch inputs by determining the change in the electromagnetic field generated by the two electrodes, whereas a second controller is designed to detect the change in the electromagnetic field caused by contactless input methods, i.e. gestures. The documentation also suggests that the multi-layer touchpad can apparently differentiate between accidental contactless inputs and actual gestures with the help of a threshold time period. The system detects whenever a user’s appendage is in the touchpad’s proximity and contactless inputs can be processed as gestures if the appendage remains in the area for a shorter time period compared to the threshold. Likewise, contactless inputs can be ignored if the appendage is detected for a period of time that exceeds the threshold. This should allow users to type on the keyboard without accidentally triggering the touchpad, and might also be of help in scenarios involving a touchscreen display.

The patent application was filed by Samsung in June and published by the USPTO a few months later. The documents don’t reveal any other important details in regards to when this type of technology could be introduced to the consumer market by Samsung, and given that the information at hand was gathered from a patent application like many others filed by the tech giant in recent times, there is no guarantee that the gesture-based touchpad in question will be adopted en masse in the future. On the other hand, this patent application might offer a preview of the South Korean company’s plans for its future laptops or Chromebooks. This year, the OEM took the veil off its new laptop lineup called the “Notebook” series which includes an entry-level model, a multimedia-centered notebook, the premium Notebook 9, and the gaming-centered Odyssey. 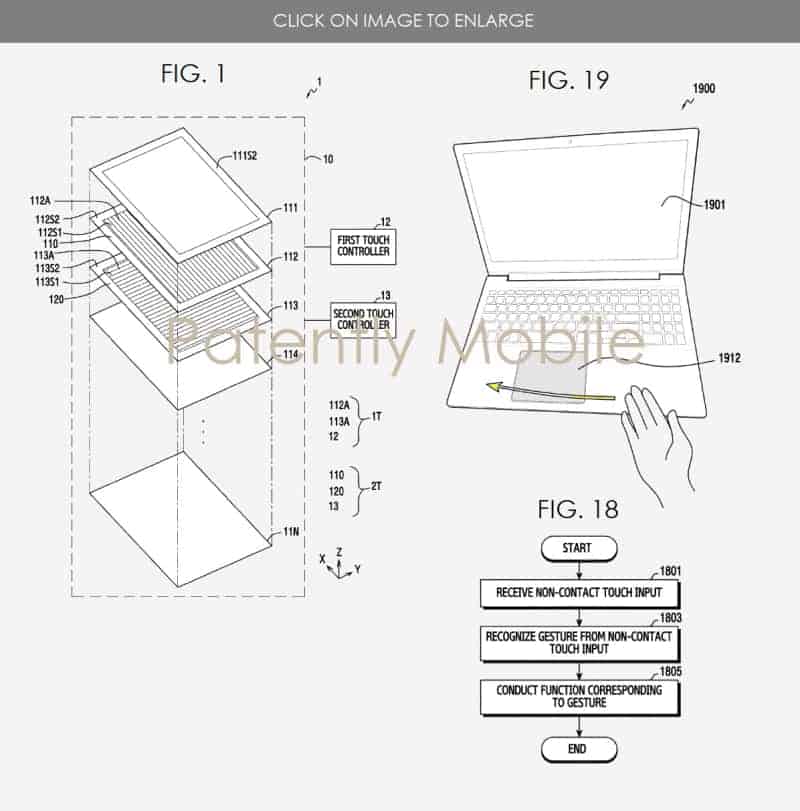