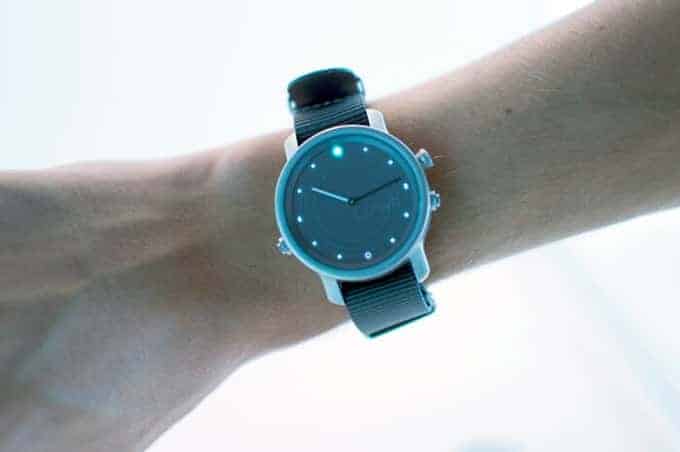 The LunaR smartwatch claims to be the first solar-powered smartwatch and interested consumers may now support this project through Kickstarter. The watch uses a transparent solar panel from the French company Sunpartner, dubbed as the "What You See Is Photovoltaic Surface" (WYSIPS) technology. This solar panel is capable of charging the smartwatch's 110mAH battery in an hour using either natural or artificial light. If there are no light sources available, users may also top up the device using the included USB charger. The watch is also waterproof up to 50 meters underwater.

The smartwatch has an embedded array of LEDs which can serve a number of purposes. The LunaR app, which is used to control the smartwatch's LED array, can be downloaded from the Google Play Store and it supports devices running Android 4.3 Jelly Bean and higher. The watch connects to the handset using Bluetooth 4.0 LE. The dual time zone feature allows the smartwatch to show the time in both the user's current and home locations. The local time displayed on the LED array while the home time is presented using the watch's hands. The app sets the local time automatically using the smartphone's GPS, although the user may also manually choose a city just in case GPS is not available or turned on. In addition, the LunaR smartwatch also shows notifications from supported applications through the topmost LED, and each app is represented with different colors. The MEMS 3-axis accelerator included with the smartwatch tracks people's physical activities while a refined algorithm monitors the user's deep sleep, light sleep and time awake. The LEDs alert the users if their goal for physical activity has been exceeded or when it is time to get some sleep.

The retail price for the LunaR smartwatch is $239, although Kickstarter backers will get the device for $138, which is 42 percent lower than the MSRP. Other available options for the Kickstarter backers include the smartwatch with sapphire crystal and knit strap for $169 or with sapphire crystal and leather strap for $179. Included in the box are the watch, nato strap, pins for attaching the watch to the strap, and the USB charger. First 3000 backers will receive the watches by December this year.