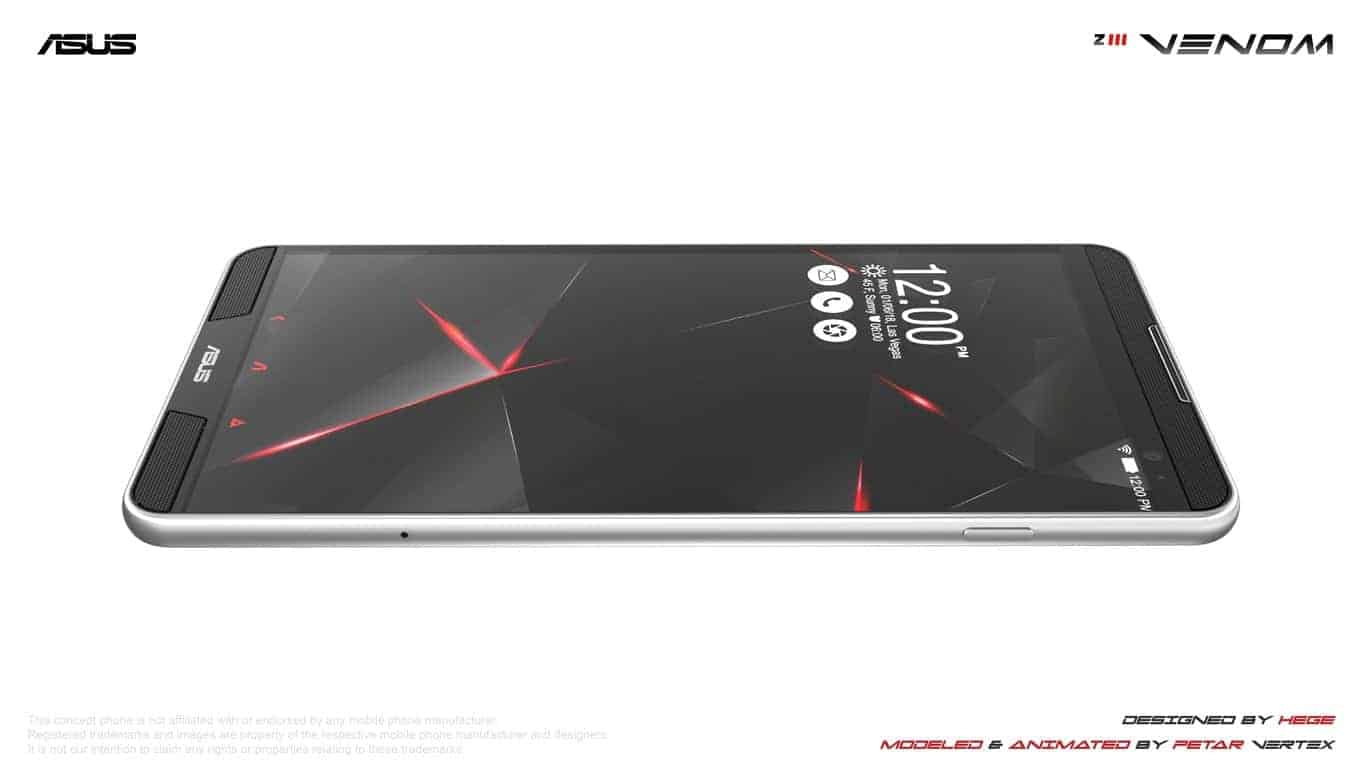 A new conceptualized ASUS smartphone has cropped up on YouTube, showing off what the concept designer hopes the company will aim for in its future devices. Interestingly enough, this design is actually a follow-up to a previous ASUS concept from the same designer – who goes by the pseudonym "Hege" – from early last year. Hege has reimagined that prior design for this new one, under the same objective of creating a device built specifically for gamers and, as would logically follow from that, it comes stamped with ASUS' PC-centric "Republic of Gamers" (ROG) branding. The device itself is called the ASUS Z3 Venom. It is envisioned as coming in three colors, including Venom Black, Venom Red, and Venom Silver. Aside from stunning metal-encased body and four front-firing speakers, the components on the inside should just about match what a PC gamer might ask for in a smartphone meant for gaming.

Those specs, as the above-mentioned ROG branding may or may not have given away, are imaged as being at or above the maximum of what is either currently possible with modern smartphones. They also aren't necessarily impossible, though you won't find them on any current ASUS device. To begin with, the device is shown as featuring a 6-inch 2K Super AMOLED display with Corning's Gorilla Glass 6 on top of it. On the inside, that display is backed up by a removable Li-Ion battery rated at 5,000mAh. It would presumably run Android 8 (Oreo), which is the latest edition of Android, with a specialized ZenUI laid over the top of that. Driving the software, the Z3 Venom would come with a Snapdragon 845 SoC and an Adreno 630 GPU. That would be helped along by 8GB of RAM and 256GB of storage out of the box.

Beyond the internals, the outside of the device would also feature a dual 12-megapixel camera setup at the back and an 8-megapixel shooter at the front. Both cameras would have a dedicated LED flash, but the main camera would go further to include dual tone flash and laser autofocus. Meanwhile, the device would also feature an LED notification light on the screen side and a fingerprint sensor at the back. It goes without saying that ASUS will probably not be releasing a device following in the footsteps of the concept, at least in the near future. It is, however, a lot of fun imaging the kinds of things that might be accomplished with the hardware Hege has thrown into it, from a gamer's perspective.