Netflix is in the process of raising the price of two of its access levels with the price change expected to have taken full effect by the start of next month, November. At present Netflix offers three access levels, Basic, Standard, and Premium, and it is the latter (or more expensive) two that will see their prices rising. Meaning the entry-level Basic access will remain at the $7.99 price.

As for Standard and Premium, these two will rise by $1 and $2 respectively for both new and existing users. Bringing the total for the Standard tier up from its current $9.99 to $10.99, while the Premium tier will see its price rising from the current $11.99 cost to $13.99. This was first reported on by Mashable although it now seems as though Netflix is already highlighting the price change on its website. Which also means that new users are now unable to take advantage of the lower prices before the price hike takes place. As due to Netflix offering new users a one-month trial the monthly price applicable following the start of a one month free trial from today (November 4) is listing the higher price changes. While existing subscribers should expect to receive an email on the price change within the next couple of weeks, depending on when their individual billing cycle ends. For those new to Netflix in general, the main differences between these three plans is the number of simultaneous streaming devices and the resolution. So for example, the Basic $7.99 plan offers one device at a time access, while the Standard plan permits two devices to stream at the same time, as well as in HD. The Premium package on the other hand allows four devices to stream simultaneously and in 4K UHD.

As for why Netflix is raising its prices, this is something that has been routinely occurring over the last couple of years, albeit at a fairly slow rate. So for example it was back in 2015 when the Standard plan price rose to its current $9.99 level. At the same time the streaming service has been greatly investing in its own ‘original’ content and it stands to reason much of the revenue generated from these price rises will be fed back into the creation and promotion of Netflix’s own content. Below is an example of the new price structure and how the three plans differ. 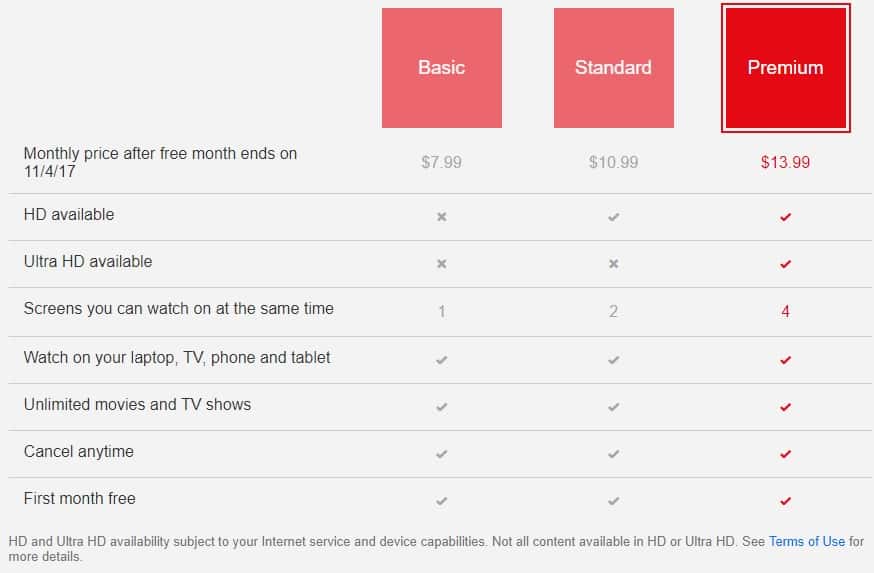