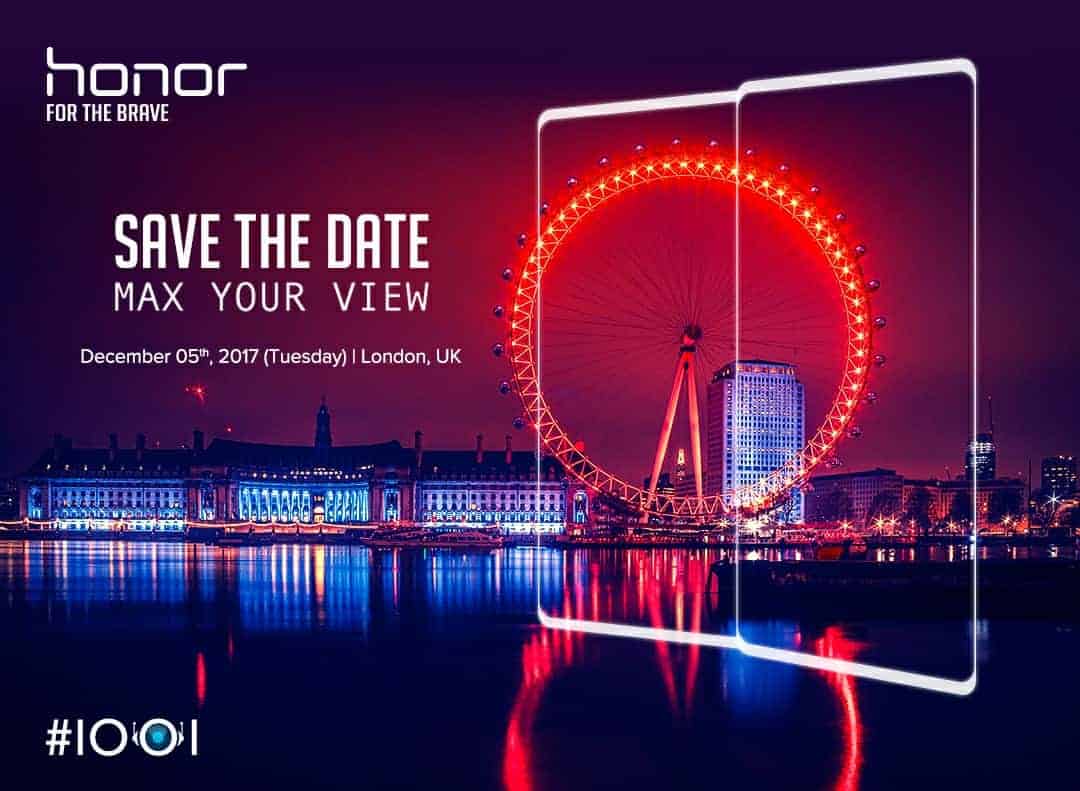 Honor had introduced the Honor 7X smartphone earlier today in China, and it seems like this phone will make its European debut on December 5. Honor has started sending out invites for its event in London, and the invite comes in a form of a teaser for the company’s upcoming smartphone. Now, if you take a look at the provided image, you will notice that Honor does not confirm that the Honor 7X is coming to the UK, but the company did share a footprint of the upcoming phone, along with the tagline ‘Max Your View’.

Now, the ‘Max Your View’ refers to the thin bezels of the upcoming smartphone, and quite probably its rather large display as well. The Honor 7X definitely fits the bill, it sports really thin bezels, and it comes with a 5.93-inch fullHD+ (2160 x 1080) display. Now, we’re still not 100 percent sure that Honor will introduce the Honor 7X, though, as the teaser suggests that the upcoming phone will not only have even thinner bezels than the Honor 7X (that could be just for teaser purposes, though), but its display will also have rounded corners, if this image is to be believed. Well, the Honor 7X does not come with rounded corners, so… who knows, maybe Honor plans to introduce a whole new smartphone and surprise us all. It is even possible that the upcoming smartphone is the Honor 9 Pro, though the timing is a bit off, as the Honor 8 Pro arrived back in April, so December announcement for the Honor 9 Pro does seem a bit early. We can guess all day long what phone will Honor introduce, but for the time being, let’s assume that it’s the Honor 7X, despite the fact that the teaser is a bit different than the phone itself (Honor 7X), that the company introduced earlier today in China.

The Honor 7X is made out of metal, it sports a rear-facing fingerprint scanner, and it also offers a dual camera setup on its back. This smartphone is fueled by the Kirin 659 64-bit octa-core SoC, while it packs in 4GB of RAM and 32GB / 64GB / 128GB of native storage. The device also sports a 3,340mAh non-removable battery, while Android 7.1 Nougat comes pre-installed on this phone, with Huawei’s Emotion UI (EMUI) skin on top of it. The Honor 7X’s pricing starts at 1,299 Yuan ($197) in China, though the phone will be somewhat more expensive in Europe.