China has been the world’s largest smartphone market for quite some time now, and according to most market research companies India has been in second place for a while now as well, though not Canalys. According to Canalys the US market has been sitting in second place until the third quarter of this year, when India overtook that place from the US, so now Canalys also reports that India is the second largest smartphone market out there.

According to Canalys, Indian smartphone market did not do all that great in the second quarter of the year, but India recovered quickly, its shipments grew 23 percent year-on-year (YoY) in the third quarter of this year, as shipments crossed 40 million units. Having said that, Samsung and Xiaomi actually account for almost half of total shipments, as the two companies shipped 9.4 million and 9.2 million units, respectively, which results in 18.6 million units altogether. That being said, Samsung, Xiaomi, Vivo, OPPO and Lenovo are the top smartphone manufacturers in India, as they account for 75 percent of total shipments in the country. Samsung actually managed to increase its shipments by almost 30 percent compared to the same period last year, while Xiaomi’s shipments jumped a whopping 290 percent compared to Q3 2016. Xiaomi obviously put more focus on the Indian market, and that clearly shows in its results, not only in India, but on a global scale as well, as Xiaomi managed to do even better than expected, at least thus far. Canalys did note that Xiaomi does great in low-end, but struggles in the mid-range market in India. Samsung, OPPO and Vivo are really strong in the mid-range segment (devices that cost between $230 and $310).

Now, it’s also worth noting that Apple started manufacturing devices in India as well earlier this year, and its iPhone shipments doubled to 900,000 handsets in Q3 2017, compared to the same period last year, so it will be interesting to see what will happen until the end of this year, and next year as well. That being said, if you’d like to check out the comparison between Q3 2016 and Q3 2017 shipments in India (per manufacturer), take a look at the provided chart down below, as it should give you a better idea what the market looks like at the moment, and how much Xiaomi grew in only one year. 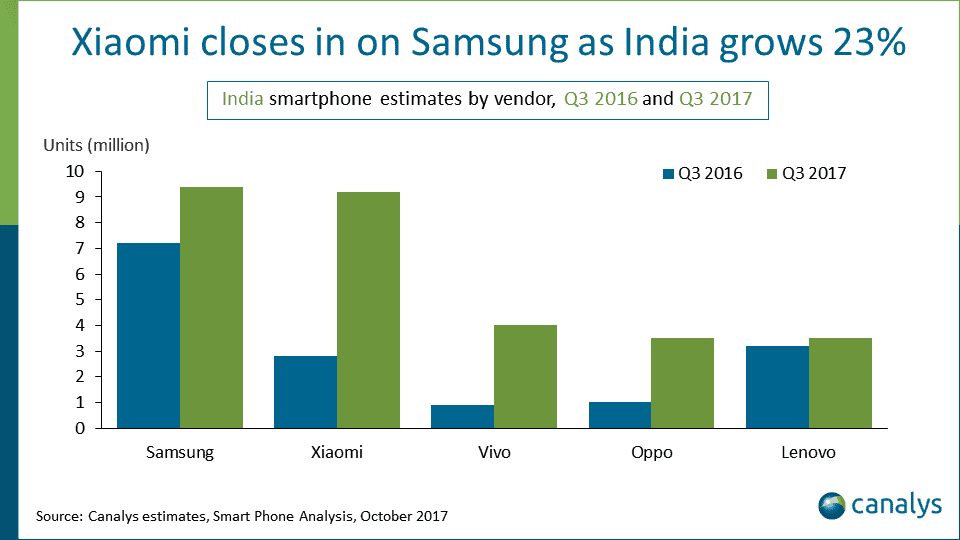