Motorola has been going all in with its Moto Mod lineup of products. The company had stated that it wanted to release about 4-8 new Moto Mods each year. It announced a few different Moto Mods at MWC earlier this year, that have not yet been formally announced – they were merely prototypes – which include the Amazon Alexa speaker Mod and the Polaroid Insta-Share Printer Mod which Evleaks has just posted over on Twitter.

The picture above shows both Moto Mods, and Evleaks did also mention that he doesn’t believe these images are to scale. What he means by that is the fact that the Alexa speaker looks like it would only take up the bottom portion of the Moto Z2 Force or Moto Z2 Play. But it is more than likely that it takes up the entire backside, possibly covering the camera, like the Hasselblad camera Mod did. Of course, that would make it a bit tougher to use the camera with the speaker attached, since it would be covered – and it’s very unlikely that the Alexa speaker Mod would add its own camera to the mix.

The Amazon Alexa speaker Mod looks pretty similar to the JBL SoundBoost Mod that is already out. It’s likely fairly thick, so it may not be something you want to keep attached at all times. It also has the Amazon Alexa logo on the back in the center. It’s available in black, and it could launch in other colors, but that information is not yet available. Based on the information that is currently available, the Alexa Speaker would be like adding an Echo to the back of your Moto Z2 Play or Z2 Force, which is an interesting feature. Now the Polaroid Insta-Share Printer is a bit of a more interesting one and likely more expensive. It basically adds an Insta-Share Printer to the back of your Moto Z smartphone. This would allow you to take a photo and then print it from your phone (literally, and not using Google Cloud Print which you can do already). And judging by the colors of this printer, Polaroid likely either made it, or made it in conjunction with Motorola. 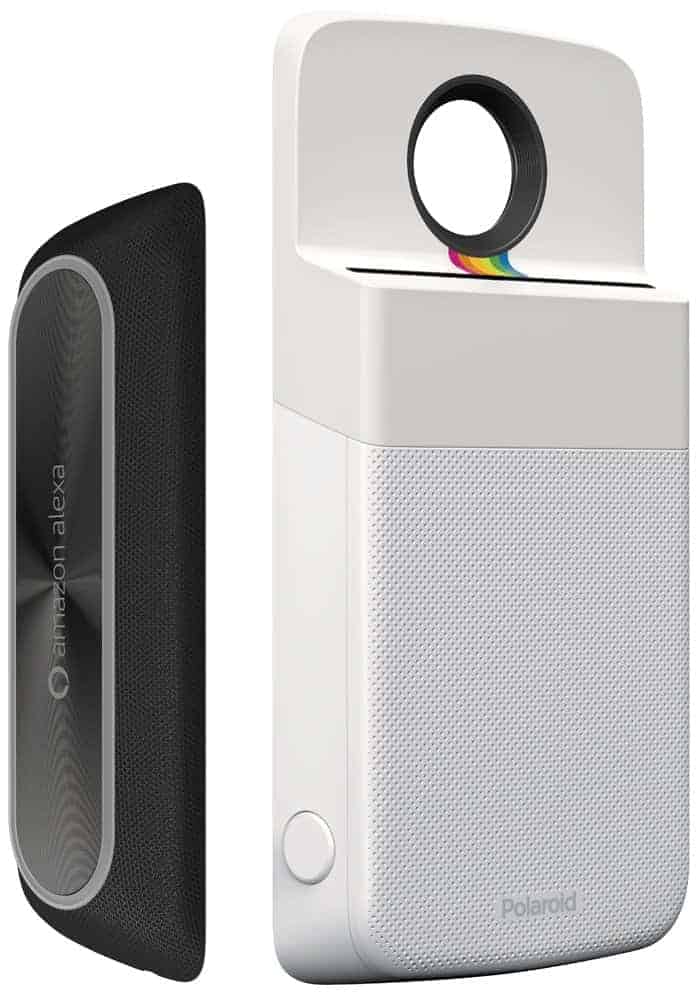