The mysterious Nubia NX907J smartphone was recently spotted as part of a GFXBench listing where some of its hardware characteristics have been uncovered. The device carries the same model number as the Nubia smartphone previously approved by TENAA – China’s FCC equivalent – but some hardware specifications such as the amount of RAM and storage space seem to differ, lending more credibility to the idea that that the Nubia NX907J may be released in multiple variants, with each one carrying a different price tag.

According to the GFXBench listing, the Nubia NX907J sports a Qualcomm Snapdragon chipset featuring eight ARM Cortex-A53 cores clocked at up to 1.4GHz and the Adreno 505 graphics chip. While the exact model is unspecified, those characteristics point toward the Qualcomm Snapdragon 435 system-on-chip (SoC) which has previously been employed by devices like the Xiaomi Redmi 4, LG Q6, and the Nubia M2 Play. Furthermore, GFXBench reveals that the smartphone carries 3GB of RAM and 32GB of on-board storage, out of which around 22GB are available to the end user, while the previous TENAA listing revealed 2GB of RAM and 16GB of memory. In addition to that, the main camera of the newly listed device is of the 12-megapixel variety, whereas its front panel accommodates a 5-megapixel unit with Full HD video recording capabilities. The device appears to be powered by Android 7.1.1 Nougat and should have a display resolution of 1280 by 720 pixels. It’s interesting to note that, according to GFXBench, the Nubia NX907J has a large 9.2-inch display which would place it well within the tablet category, but this is likely an error on the benchmarking tool’s side, and the device is more likely to accommodate a 5.5-inch panel as previously suggested by TENAA.

At the moment, there is no word on the smartphone’s availability and pricing, however, it’s evident that the Chinese original equipment manufacturer is preparing the device for an eventual market release which may take place in the near future. However, it’s also likely that the Nubia NX907J will be specifically aimed at select Asian markets, not unlike the Nubia M2 Play which was introduced in China this June. 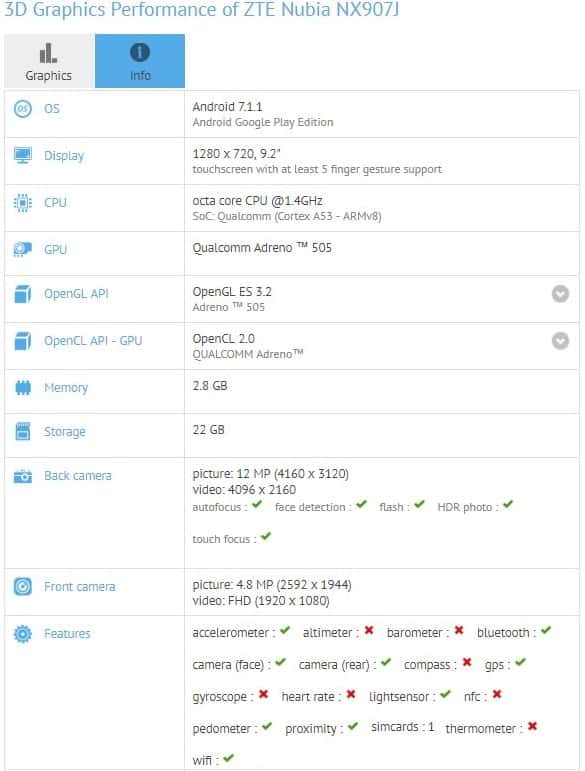