A Xiaomi-made smartphone codenamed Chiron was once again sighted online earlier this week, having appeared in the database of mobile benchmarking tool GFXBench. The device that was previously rumored to be the Mi MIX 2 features different hardware specifications than the company’s recently announced phablet, indicating that the Chinese original equipment manufacturer has another high-end handset in the works. While the Xiaomi Chiron is also equipped with premium specifications, it ships with a 5.6-inch display panel with a resolution of 1,920 by 1,080 pixels amounting to a conventional widescreen aspect ratio of 16:9. In contrast, the Mi MIX 2 boasts a 5.99-inch FHD+ screen which utilizes a taller 18:9 image format.

Other features of the Xiaomi Chiron seem to be comparable to those of the Mi MIX 2, with the device being listed as coming with Qualcomm’s Snapdragon 835 SoC and 6GB of RAM, in addition to having 256GB of internal flash memory. It’s currently unclear whether its storage space is expandable and GFXBench didn’t detect a secondary SIM card slot in the handset, though that still doesn’t mean the Xiaomi Chiron won’t have one, especially since this particular benchmark often struggles with identifying dual-SIM capabilities of smartphones. According to the same listing, Xiaomi’s unannounced phablet comes with a 12-megapixel camera on its rear plate, whereas its top bezel supposedly houses a 5-megapixel sensor. The primary imaging setup of the device is supposedly accompanied by a flash unit and features autofocus, HDR, and face detection support, in addition to being able to record 4K content. The secondary sensor is of the QXGA (2,048 x 1,536) variety in terms of video capabilities and doesn’t seem to be paired with a flash.

The Xiaomi Chiron was tested running Android 7.1.1 Nougat with Xiaomi’s proprietary MIUI skin, presumably MIUI 9. NFC seems to be part of the package here but a heart rate monitor isn’t included in the smartphone, according to GFXBench. With Xiaomi already debuting a high-end device meant to be on sale this fall in the form of the Mi MIX 2, it’s currently unclear when the recently sighted handset may hit the market and what its official moniker may be. Based on the specs revealed by GFXBench, the Xiaomi Chiron sounds like the Mi 6 Plus which was long rumored about but never released, with the tech giant instead opting to launch a visually identical Mi Note 3 which ships with a mid-range SoC. 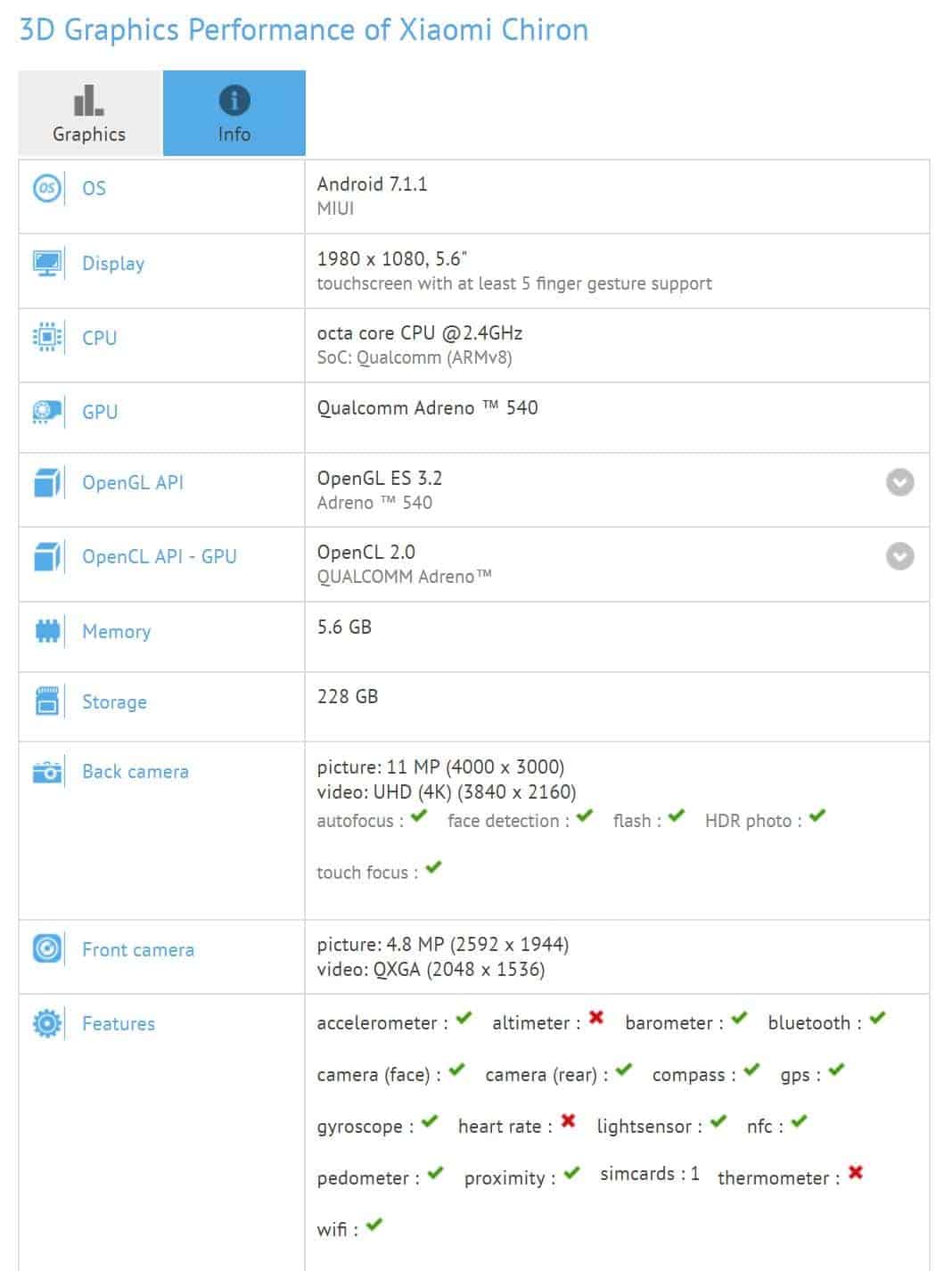