Several key hardware specifications of the upcoming Vivo X20 Android smartphone have been recently uncovered in a couple of leaked live photos depicting the device’s retail box along with a list of features planned to be showcased in physical retail stores. The list also further confirms the smartphone’s exterior design boasting a dual rear-facing camera setup and depicts the handset in three different color options – black, pink, and gold.

According to the leaked materials, the Vivo X20 will be equipped with a 6.01-inch display featuring an 18:9 aspect ratio and a 2K resolution. The device will be powered by the Qualcomm Snapdragon 660 system-on-chip based on eight Kryo 260 CPU cores split into two four-core CPU clusters operating at up to 1.84GHz and 2.2GHz, respectively. Additionally, it appears that the Vivo X20 takes advantage of two 12-megapixel main cameras which can work together to deliver 24-megapixel images, but no new details on the front-facing sensor have been revealed. Lastly, the smartphone seems to accommodate an AK4375A Hi-Fi audio chip and the flyer confirms that the device will take advantage of a face recognition technology which has been previously referred as Face Wake by the Chinese OEM. Judging by these leaked images, the Vivo X20 will not abandon its fingerprint reader in favor of face recognition and will also carry a rear-mounted scanner.

The Vivo X20 has been previously confirmed for an official unveiling set to take place in less than a week, specifically on September 21 when the company is also expected to showcase two additional variants of the same device. One of those smartphones carries the Mars Edition moniker and was recently teased in a handful of live pictures alongside a couple of bonus items, all packaged in an industrial-looking briefcase. The other variant is known simply as the Vivo X20A, though it’s currently unclear how exactly it will differ from the standard model. Either way, the Vivo X20 and its variations should represent an important addition to the company’s mobile portfolio as it will be its first device to adopt the now-popular full-screen form factor which emphasizes large display panels and increasingly thin bezels. 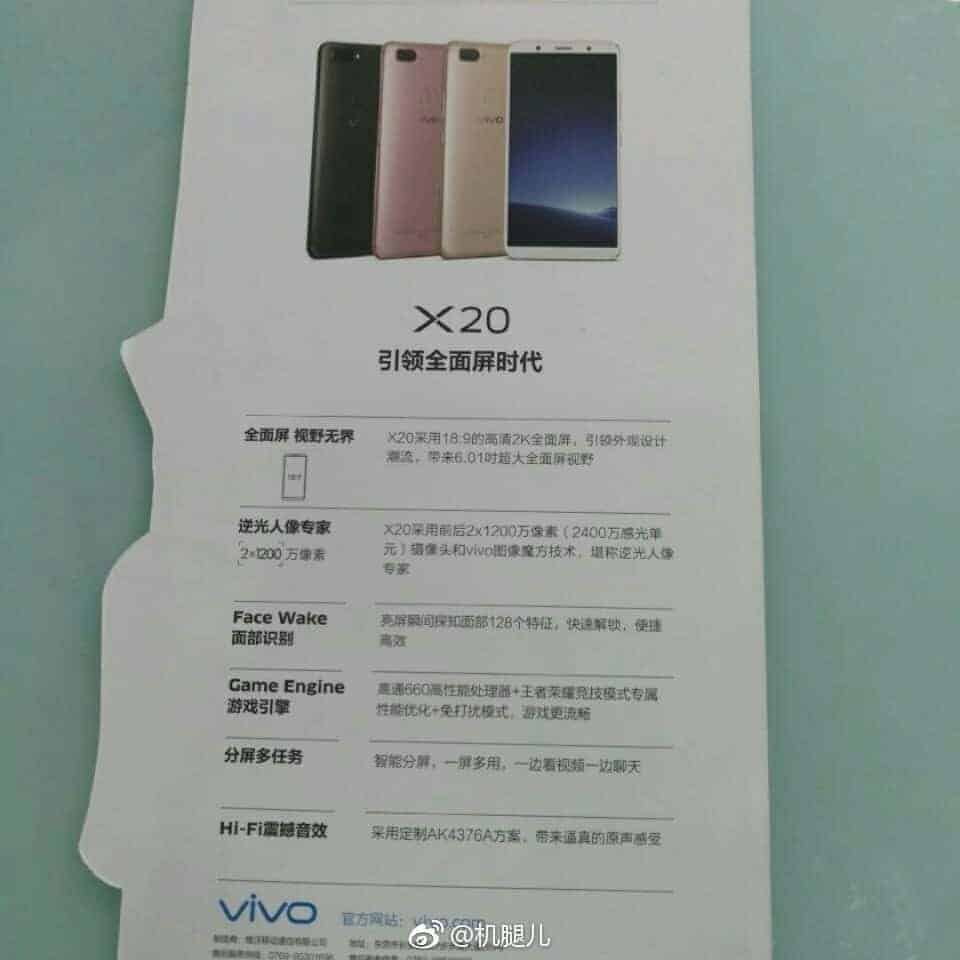