An upcoming update for the Google Assistant will warrant manual installation, requiring users to reconnect their Internet of Things (IoT) devices to the company's artificial intelligence (AI) companion, as the Alphabet-owned firm started notifying users of this change via a lengthy email message which started going out on Thursday evening. The email — whose entire contents can be read below — serves as an announcement of a seemingly major update which will introduce a number of "new features and integrations," though it doesn't elaborate on the matter any further than that. The email itself still hasn't reached all Google Assistant users and it's currently unclear whether it's only being rolled out in the United States, but once the update in question is available for download, you'll be notified to manually complete its installation when you attempt using the Google Assistant to control any device which warrants the new software package. The upcoming upgrade isn't an experimental one as at least several Reddit users who claim they never participated in Google's beta program confirmed receiving the same email.

The notification itself will be delivered to your smartphone once you attempt to issue a voice command to a device connected to the phone version of the Google Assistant or Google Home smart speaker, the firm said. If the gadget you attempted to control before receiving the message does require an update, you'll be prompted to unlink and relink it with the Google Assistant either through its dedicated Android or iOS service or the Google Home app, depending on which tool you used to issue the command which triggered the update prompt. The wording of Google's announcement on the matter suggests that the update may not affect all IoT devices compatible with the AI service but those which require the new firmware will automatically deem it mandatory, being rendered incompatible with the Google Assistant until you have manually installed the update and relinked them to the assistant.

Owners of the Google Home speaker will be required to complete the installation by navigating to the "Home Control" section of the Google Home app which is accessible from its main menu, from where they'll have to tap the plus sign to be presented with a list of device-related services which require the upcoming update. Any item on this menu which is denoted with an "Upgrade!" label will have to be manually unlinked and relinked in order for the firmware to be installed, the Internet giant said. The process will be similar for people who don't own the Google Home and instead control their IoT devices with the mobile version of the Google Assistant; this particular app also features the same "Home Control" menu which can be accessed by tapping the blue icon in the top-right corner of its main interface, following the menu button to the actual "Settings" of the digital companion, and then navigating to "Services." From there, the installation procedure is identical to the one required by the Google Home app. The actual update will be installed after you choose to relink any particular service to the Google Assistant, the company's correspondence suggests.

The latest mass email from the Mountain View, California-based tech giant doesn't explain why the upcoming Google Assistant update will require a manual installation seeing how the majority of the previous firmware upgrades for the service were completely automatic and didn't warrant users to reconnect their devices. The unconventional and less convenient installation procedure may indicate that the next update for the firm's digital assistant will be a relatively major one in terms of new features and general changes. In case you use the Google Assistant to control one or more IoT devices and still haven't received the latest email from Google, you either will shortly, or your Internet-enabled products don't have to be relinked to the platform at all. The launch window for the actual software that Google is planning to roll out is still unclear as of this writing.

News of a major update for the Google Assistant comes shortly after rumors that Alphabet's subsidiary is working on a smaller revision of the Google Home speaker which is supposed to be more compact than the original device and directly compete with Amazon's Echo Dot lineup. The company's next IoT offering may be officially announced on October 5, which is the supposed date of its next consumer hardware event when Google is already expected to present the Pixel 2, Pixel XL 2, and possibly a number of other devices including Google Assistant-enabled Bisto headphones and a new Chromebook Pixel. All products which Google debuts next month are likely to be available for purchase by November, at least in the United States. 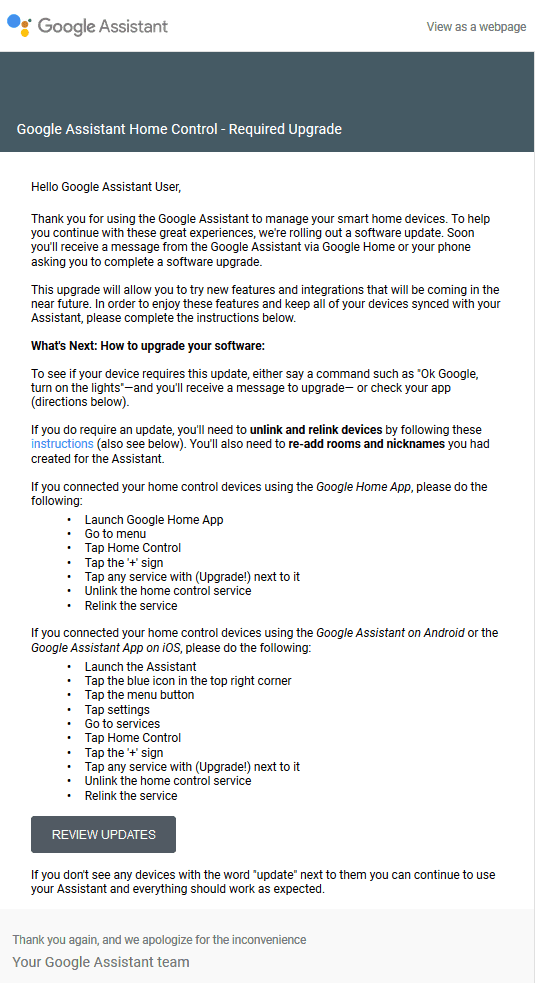