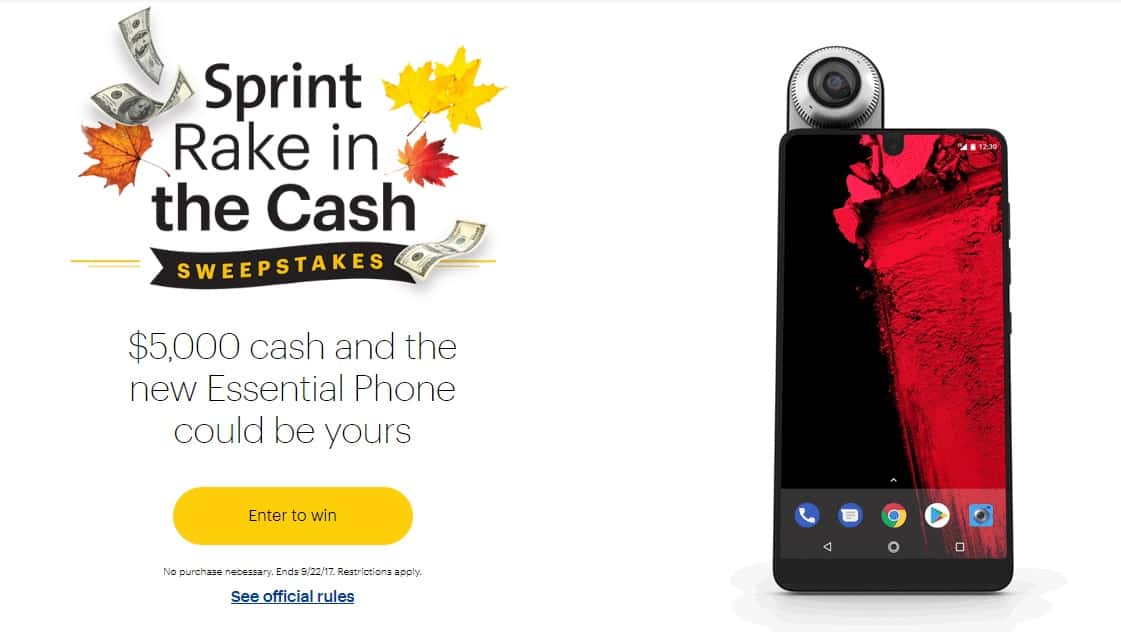 Earlier this weekend US-based carrier Sprint launched new sweepstakes with prizes having a total value of $23,858. The first prize consists of $5,000 as well as the new Essential PH-1 paired with a 360 degree camera, while the second prize will be awarded to 20 Sprint customers, and consists of an Essential PH-1 and the aforementioned camera attachment. The contest will be carried over Sprint.com and Twitter, and will end on September 22. Participants are not required to make a purchase through Sprint, and instead, they have to follow the carrier on Twitter and can increase their chances of winning by mentioning Sprint on Twitter alongside the hashtag #RakeItInSweepstakes.

As expected, terms and conditions apply, and thus the Sprint Rake in the Cash Sweepstake is available only to legal residents of the United States who are at least eighteen years of age. Participants also need to be customers of Sprint and have good standing with services starting on, or before, the 8th of July, 2017. Those who wish to join the contest are limited to a maximum of two entries per day: one through the carrier's website and the other over Sprint's Twitter account. The contest's winners will be picked at random and determined on September 29, and Sprint will notify potential winners on or around October 2nd.

As for the rewards, Sprint will choose twenty winners for the second prize, consisting of the Essential PH-1 and a 360 degrees camera attachment worth a total of $898. Only one lucky participant will win the grand prize, which includes the aforementioned devices alongside a $5,000 check. The Essential PH-1 was announced by Andy Rubin in August 2017, and features a 5.71-inch IPS LCD display with thin bezels, a resolution of 2560 x 1312, and a screen-to-body ratio of around 84.9 percent. The device is powered by the Qualcomm Snapdragon 835 system-on-chip housing eight Kryo CPU cores along with an Adreno 540 graphics chip, and carries 4GB of RAM as well as 128GB of on-board memory. The back of the device sports two 13-megapixel main cameras with laser and phase detection autofocus, and the front panel accommodates an 8-megapixel sensor. Refer to the source link below for or more details on Sprint's sweepstakes, prizes, and conditions.