Skip to content
Advertisement
Trusted By Millions
Independent, Expert Android News You Can Trust, Since 2010
Publishing More Android Than Anyone Else
44
Today
89
This Week
738
This Month
738
This Year
118579
All Time
Advertisement Some Android Messages users stopped receiving notifications as of the latest update to Google’s app, as evidenced by dozens of negative reviews which started appearing on the Google Play Store shortly after the company distributed the latest build of its mobile communications service. All affected users seem to be running the app version 2.5.207 which started rolling out on Thursday and should now be available for download in all parts of the world. The screenshot below shows some of the most prominently featured reviews complaining about the issue, though many more similar complaints can be found on the app’s Google Play Store page.

The cause of the bug is presently unclear and the Mountain View, California-based tech giant has yet to officially acknowledge the issue on its Product Forums. What’s certain is that not all users have been affected by missing notifications as we weren’t able to reproduce the problem using the latest version of the app running on Android 7.0 Nougat. Some people who are reporting problems claim that they stopped receiving notifications as soon as they transitioned to the latest Android Messages build, whereas others say that the problem didn’t manifest itself immediately. Rebooting a device reportedly does nothing to remedy the problem and neither does uninstalling the app itself or clearing its cache. Apart from manually installing an older version of the service or relying on a third-party notification system, users affected by the issue who remain adamant to stick with Android Messages until Google addresses the problem are seemingly out of options.

Android Messages is a successor to the Google Messenger app which the Alphabet-owned internet giant rebranded in early 2017, looking to position its app as the default SMS tool on Android devices. Some users who decided to voice their complaints about the problem introduced by the new build of the service are now claiming that Google cannot hope to compete with other SMS apps if it isn’t able to ensure the consistency of some basic functionalities like notifications. It remains to be seen how widespread the problem actually is, with Android Messages still boasting a largely positive rating on the Google Play Store.

Update: Google reached out to confirm it’s currently rolling out a fix for the issue. The company’s Communications Products VP Nick Fox previously took to Twitter to say the firm identified the bug but has yet to elaborate on the matter. Affected users should hence have their problems resolved shortly, though it remains to be seen whether the fix is distributed as a client-side update or if a server-side switch will be enough.

Sorry about this. We found the issue and are rolling out a fix today. 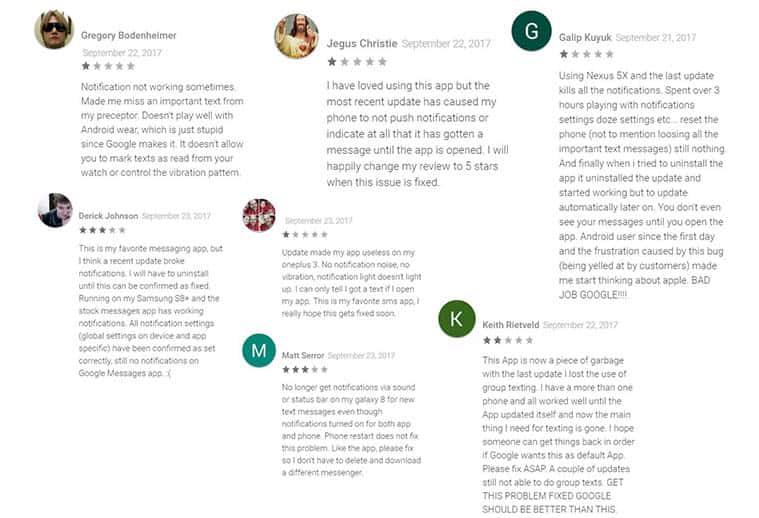