Gionee has added a new smartphone to its X series, introducing the new Gionee X1s in India. The Gionee X1s is a selfie-focused smartphone that arrives as the successor to the Gionee X1 launched just last month. The Gionee X1s comes with a 16-megapixel front shooter with a flash and special features such as Face Beauty 2.0 and Beautified Video. While the front camera is one of its main selling points, the Gionee X1s also has other strong suits, such as a large 4,000mAh battery which should deliver a great performance on a single charge, the company claims.

Gionee India said the Gionee X1 has been received positively in the country and the company is building its X series with youngsters in mind. The Gionee X1s takes things to the next level in terms of capabilities, aiming to boost the general appeal of the series even further. The new smartphone features a 5.2-inch IPS display with an HD resolution of 1,280 by 720 pixels and Gorilla Glass 3 protection, a 64-bit quad-core MediaTek 6737T processor clocked at 1.5GHz, 3GB of RAM, and 16GB of internal storage expandable up to 256GB with a microSD card. Other specs include a 13-megapixel rear camera, rear-mounted fingerprint sensor, 3.5mm headphone jack, and Android 7.0 Nougat with the company’s proprietary Amigo 4.0 skin on top of it.

The Gionee X1s comes in Black and Gold color options and will hit various retail stores in India on Thursday, September 21, sporting a price of Rs. 12,999 (roughly $202). In terms of design, the Gionee X1s looks nearly identical to the Gionee X1, save for its slightly bigger display and the new rear speaker grille on its back, right below the Gionee logo. To further sweeten the deal, Gionee has also signed a few deals with partners for promotional offers at launch. Upon purchasing the new Gionee X1s, Airtel customers will also get 10GB of data per month for six months on any data recharge of at least 1GB. Moreover, purchasing the Gionee X1s also brings two Paytm Cashback voucher codes which customers can use to get Rs. 250 cashbacks on a Paytm purchase of at least Rs. 350. 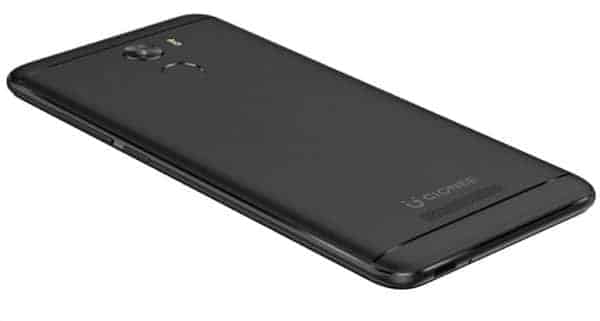