This week has seen a new mobile phone from Samsung receiving its certification from the National Radio Research Agency (NRRA) based in South Korea. The model number of the device is SM-G888N0 and this is a model number that has been routinely associated with the Samsung Galaxy X – aka Samsung’s foldable phone. As a result of the SM-G888N0 receiving it NRRA certification, speculation is now building that the phone is moving closer to an official announcement.

This is not the first time that the SM-G888N0 has been spotted going through the pre-release certification process as the same model number was spotted getting its certification from the Wi-Fi Alliance (WFA) back in April of this year, in addition to Bluetooth SIG certification back in July of 2017. The difference being that this latest certification is not only the most recent, but also likely to be most indicative of the device being readied for its launch. Unfortunately, as is the case with such certifications, the NRRA listing does not provide any additional information on what is likely to be on offer with the Galaxy X. With the listing (shown below) simply highlighting the model number, the purpose of the device (LTE Mobile communication device), the manufacturer (Samsung), and certification date (September 21). Likewise, the passing of this model through the NRRA does not provide any information on whether the device will actually become available in regions outside of South Korea – where it does seem destined to first launch and become available. In fact, it very well could be the case that this device does only launch in South Korea.

In spite of the lack of details on this phone in general, it is clear that its main selling point is going to be is foldable nature. Whether or not this is an aspect that will equate to commercial success everywhere, is one which has become quite the story with coverage on Samsung working on a foldable phone consistently emerging over the last few years. So many will be paying attention to see how premium this design-focused smartphone is when it does launch. Which at the moment, and based on having passed through the WFA, Bluetooth SIG, and now the NRRA respectively, might be fairly soon. 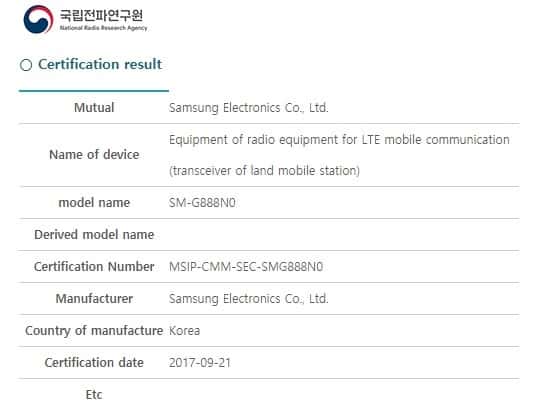