The Samsung Galaxy A (2018) has just surfaced. If you take a look at the provided image, you’ll be able to see the upper back side of the upcoming Galaxy A (2018) , which, in all honesty, does not reveal much about the device, but we at least can see that it will sport a single main camera. Next to the phone’s main camera, you’ll get an LED flash, and below the camera lies a fingerprint scanner, which probably means that the company is ditching the physical home key.

Samsung had introduced its Galaxy A (2017) lineup of smartphones back in January, so that means that the Galaxy A (2018) will launch in the coming months, it is possible that Samsung opts to introduce it before the end of this year, though, we’ll see. The company is expected to announce three new Galaxy A smartphones, at least at first, the Galaxy A3, A5 and A7 (2018). Later on, some additional Galaxy A-branded models may arrive, though. As far as specs are concerned, these will be mid-range smartphones, and the Galaxy A7 (2018) did surface on GFXBench quite recently, and according to the provided info, it may sport 4GB of RAM, fullHD display, 32GB of storage, Android 7.1.1 Nougat and a 16-megapixel camera on both its back and front side. 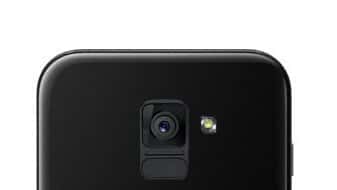