An HMD Global-made device which may be the upcoming Nokia 9 appeared in the database of mobile benchmarking tool GFXBench earlier this week, having been tested as running Android 8.0 Oreo. The listing itself references three model numbers, only one of which could belong to the upcoming Nokia flagship – TA-1052. The other two numbers are the TA-1004 and TA-1012 which were already confirmed as belonging to the Nokia 8, the first high-end device in the brand’s post-Microsoft era which officially debuted earlier this summer. References to those two variants could indicate that what’s been tested here isn’t the upcoming Nokia 9, but a version of Nokia 8 running Android 8.0 Oreo, hinting that the Finnish phone maker is already in an advanced testing phase of getting Google’s next operating system to the Nokia 8.

Alternatively, it’s possible that someone simply managed to compile an Android 8.0 Oreo build which works on the Nokia 8 to the extent of being able to remain stable during a benchmark test but that seems like a less probable scenario seeing how GFXBench identified seemingly all of the handset’s sensors and connectivity options, which usually isn’t the case with highly experimental third-party builds of Android which tend to lack Wi-Fi, GPS, NFC, and other capabilities. The hardware specs listed by GFXBench also correspond to the Nokia 8 despite the fact that the benchmark identified the device as the Nokia 9, revealing a 5.3-inch QHD panel with a 16:9 aspect ratio, Qualcomm’s Snapdragon 835 SoC, 4GB of RAM, and 64GB of internal flash memory.

The benchmark was seemingly unable to accurately identify the camera of the Nokia 8, listing its primary setup as a single-lens 12-megapixel module instead of a dual-sensor 13-megapixel setup, and also appears to have missed one megapixel by stating that the front-facing shooter of the handset is of the 12-megapixel variety. While rumors pertaining to the Nokia 9 have been circulating the industry for months now and HMD Global may ultimately end up releasing another high-end device in the near future, it seems unlikely that the company’s next flagship would feature virtually identical specs to the Nokia 8. Instead, owners of the firm’s premium handset should be on the lookout for an Android 8.0 Oreo update which is presumably set to start rolling out in the coming weeks, just like the tech giant previously promised. 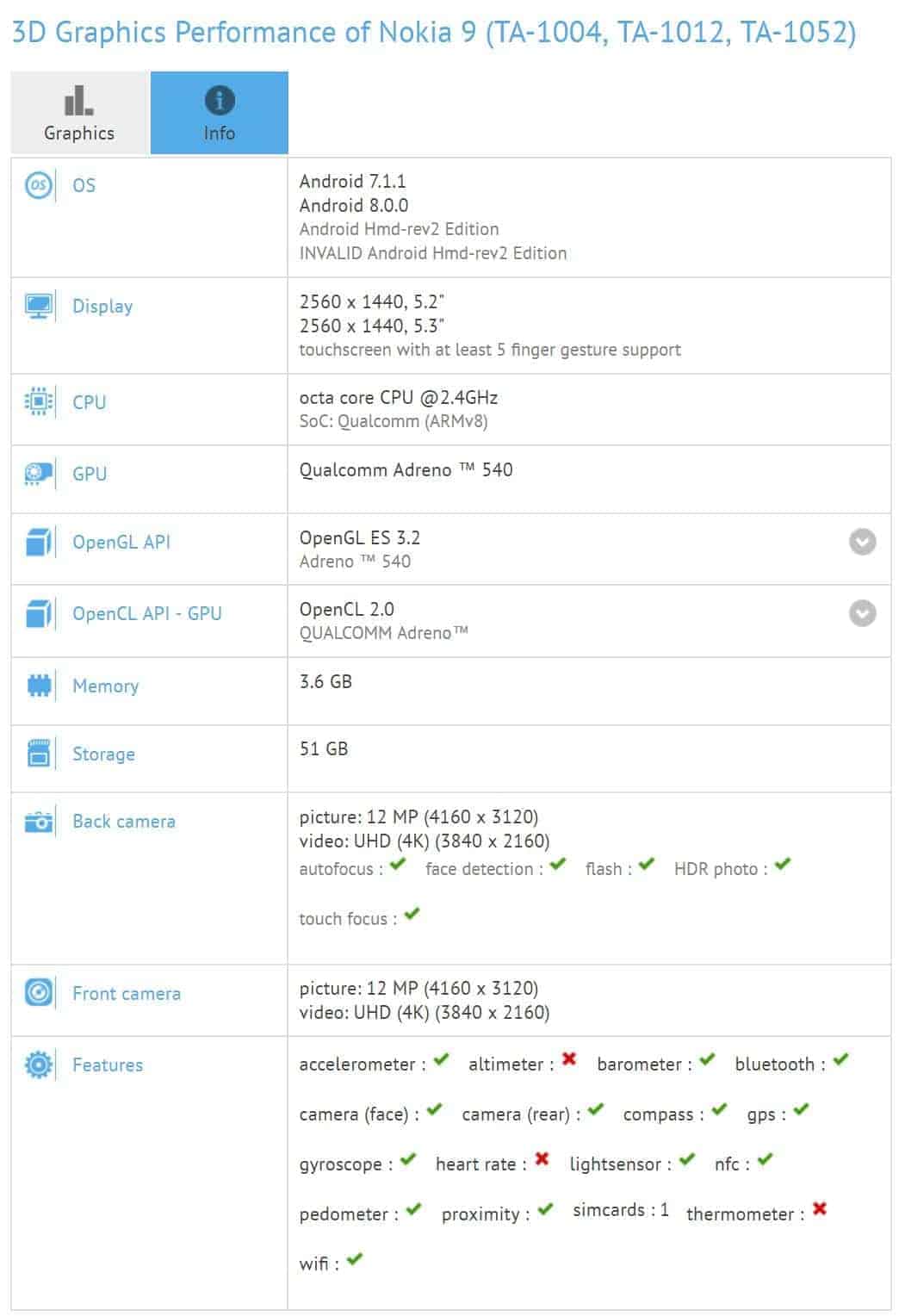