The OnePlus 5 smartphone is going to be more widely available in India as it will be offered for sale at select Croma retail stores from September 19, according to an announcement by OnePlus on the company’s official Twitter account. The OnePlus 5 model with 6GB of RAM and 64GB of internal storage is priced at Rs. 32,999 (approximately $515) while the OnePlus 5 with 8GB RAM and 128GB of flash memory costs Rs. 37,999 ($593). It’s worth noting that the 6GB RAM variant is available in the Soft Gold color, while the Slate Gray handset was initially offered in just the 6GB RAM variant but is now available in both the 6GB and 8GB RAM options. Buyers who want the Midnight Black option will only be able to get it with 8GB of RAM. All three color choices of the handset will be offered by Croma.

The latest OnePlus flagship officially debuted in June and was first sold in India by Amazon from June 22. One week later the giant online retailer announced that the OnePlus 5 had become its fastest selling phone ever in India, although didn’t give specific figures at that time. However, Chinese multinational BBK Electronics, who own OnePlus, said that the company’s latest smartphone had gathered three times the number of sales for the OnePlus 3T over the same time span. The OnePlus 5 also became available in India through the OnePlus online store as well as the Bengaluru and Delhi OnePlus Experience stores. Extending availability to other retail stores is likely to increase sales further, although the announcement referred to “select” Croma stores so at this stage it’s not clear how widespread this will be.

As a refresher on specifications, the metal-clad OnePlus 5 packs the Snapdragon 835 octa-core SoC paired with the Adreno 540 GPU for graphics processing. It has a 5.5-inch AMOLED display with a fullHD resolution, and a non-removable 3,300mAh battery to keep the lights on. There’s a dual camera set-up on the rear, with 16-megapixel and 20-megapixel sensors, and a 16-megapixel front-facing shooter. Connectivity options include 4G VoLTE, Wi-Fi 802.11 a/b/g/n/ac, and Bluetooth 5.0, and the phone’s features include a fingerprint sensor on the front as well as fast charging technology. The phone runs Android 7.1.1 Nougat skinned with OnePlus’ proprietary OxygenOS. 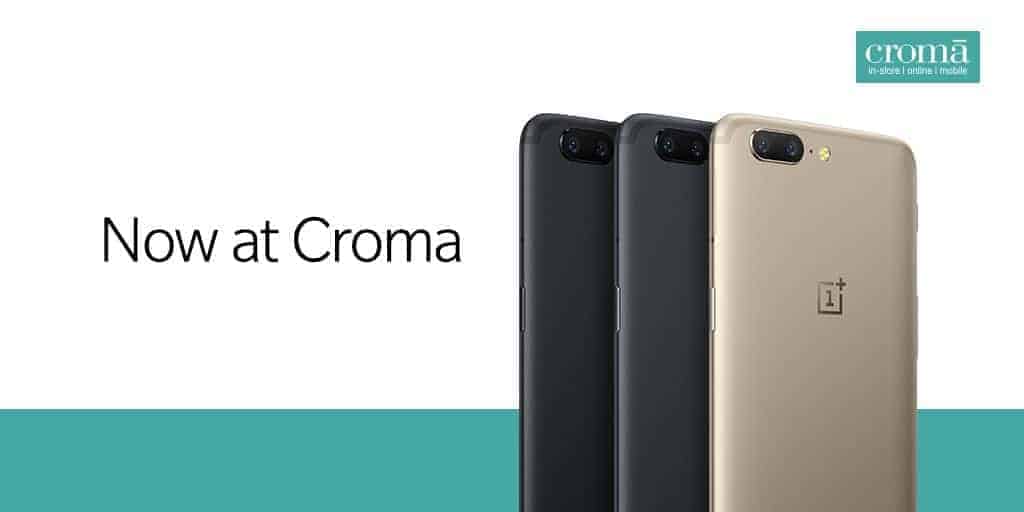